Book review: The Trial and Execution of the Traitor George Washington 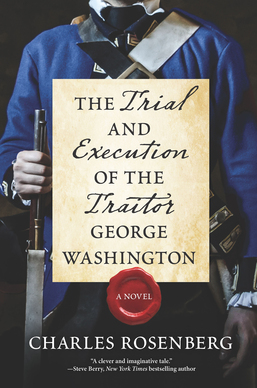 His work, “The Trial and Execution of the Traitor George Washington,” (Hanover Square Press/419 pages) is inspired by a few bits of forgotten history.

In June of 1776, Thomas Hickey, who was a member of Washington’s Guard, was court-martialed, convicted of mutiny (he was thought to be planning to join the British) and executed.

There were rumors that he was involved in a plot to kidnap George Washington. The idea of kidnapping important figures in the Revolutionary War went both ways, as Rosenberg reveals to the reader as he notes a letter written from George Washington to Colonel Ogden authorizing Ogden to seize Prince William Henry, the presumed heir of King George III.

Rosenberg’s novel begins with a man who calls himself “Mr. Smith” sailing aboard HMS Peregrine on his way to America. The man called Smith is really Colonel Jeremiah Black and he has been given a most audacious plan — seize General George Washington, the leader of the Colonial army which is waging a revolt against British rule.

Washington is to be brought back to England where he will be tried for treason. As the punishment for treason is most severe (death by drawing and quartering) the government of first minister Lord North hopes Washington can be used as a bargaining chip to end the terrible war in America which is proving to be increasingly unpopular (and expensive) for Britain. (A little tidbit of history this reviewer wishes to note is that the last man to be hanged, drawn and quartered in England was David Tyrie in 1782, having been convicted of corresponding with the French.)

Rosenberg blends historical persons with fictional characters in this imaginative novel of the Revolutionary War. Perhaps the most interesting chapters of his story concern the actual trial of Washington.

The author’s portrayal of King George III as a blood thirsty monarch does not seem to square with the account of John Adams – America’s first ambassador to England after the war. Adams was most impressed with the cordiality of the king and dismissed his label as a tyrant as he was denounced in the thirteen colonies’ Declaration of Independence.

While one may quibble whether it was poor advisors (namely Lord North) or an intransigent monarch who bears responsibility for the hostilities and eventual war for independence in America, there is no denying that Charles Rosenberg has penned a most interesting piece of historical fiction.