The wolf issue in Michigan 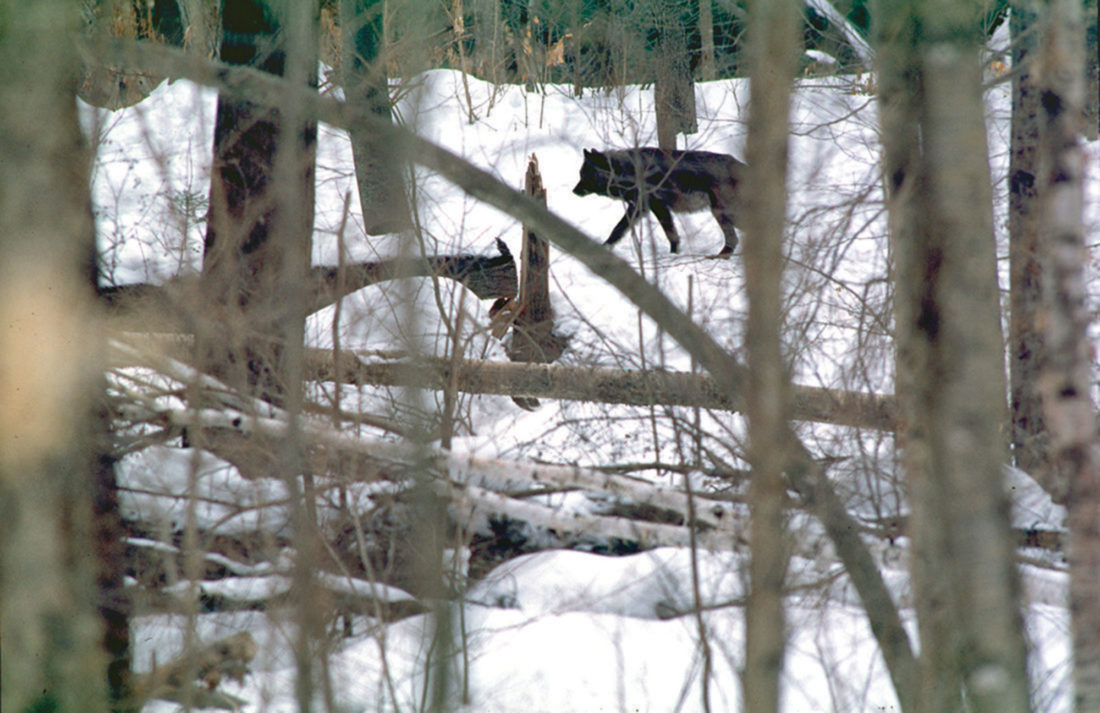 THE MYTHS AND FACTS surrounding wolves in Michigan were the focus of a recent program at the Michigan Iron Industry Museum in Negaunee. (Photo courtesy of the Michigan Department of Natural Resources)

NEGAUNEE — Wolves tend to be polarizing: One side wants to protect them, and the other want them dead.

“Both sides are equally guilty of using facts and myths incorrectly” when talking about wolves, said Brian Roell, a wildlife biologist with the Michigan Department of Natural Resources.

His recent program at the Michigan Iron Industry Museum aims to dispel some of the misconceptions about this animal.

“It’s this unnatural fear that we have of them,” Roell said.

In fact, wolf attacks are extremely rare, and far more people are at risk from bees and wasps — due to allergic reactions — and vehicle accidents involving deer, he said.

The DNR, he said, finds itself “getting squished” in the middle of this debate. However, he stressed the DNR is not a decision-making body. In Michigan, decisions are made by the Natural Resources Commission. The DNR provides input and gives it suggestions, but the NRC — the eight-member group appointed by the governor — sets regulations.

People usually aren’t told about the role wolves play in the ecosystem or what it means to be a large predator, he said.

Proper identification of wolves also can be problematic, with wolves sometimes mistaken for another Michigan canid, the coyote. That’s understandable, Roell said.

“If I don’t get a good look at it and it’s at a distance, I’m not sure sometimes,” Roell said.

However, he noted there are things people can notice to tell the difference: Wolves typically are heavier and have a broader muzzle, while coyotes have a more pointed face and shorter legs.

One Michigan myth is that “super coyotes” — wolf-coyote hybrids — are being propagated, he said. However, that interbreeding isn’t taking place.

As a species, wolves face many challenges in their lives.

An article, “All About Wolves,” on the website isleroyalewolf.org states the life of a wolf is difficult and usually short. The chances of pup survival are highly variable; in some years, most or all pups might die. Of those that survive their first 6 to 9 months, most die by age 3 or 4. Even in a healthy wolf population, one in four or five adult wolves dies every year.

The “leaders of the pack” — alpha wolves — tend to be the longest lived, commonly living between 6 and 9 years.

“Behavior-wise, our wolves do all the things your pet does,” Roell said.

For example, a wolf will cower with its tail between its legs. “That’s all pack mentality,” Roell explained.

Roell said local wolf populations include the Echo Lake Pack, which has the Triple A Road as its north boundary and travels to the western part of Marquette County, moving to Harlow Lake in the winter to follow deer; the Huron Mountain Club Pack and the Northwest Pack, which he suspects might be the same pack; the Wildcat Pack near the Silver Lake Basin; the Arnold Pack; the Strawberry Lake Pack near the Sands Plains area; the Kates Grade Pack; and the Ford River Pack.

Wolves have been part of an ongoing wolf-moose study on Isle Royale, although the wolf population there has dwindled.

In Michigan, white-tailed deer are the main food source for wolves, he said, with beaver making up between 15 to 20 percent of their diet.

“Wolves are not out there chasing squirrels and snowshoe hares and ruffed grouse and all that kind of stuff,” Roell said. “It’s just not worth it for them. They would starve to death if that’s all they had to eat.”

With their jaw strength, a wolf will eat just about the entire animal, he said, noting if bone chips are found in scat, it’s probably from a wolf.

Roell acknowledged wolves do kill livestock in Michigan, but so do coyotes and bears. The state will compensate livestock producers for animals killed by a wild predator, which includes wolves, coyotes and cougars.

Michigan has a varied history on wolf management. From 1817 to 1960, the state had government bounties and a trapper system set up to control wolves, which were eradicated from the Lower Peninsula by 1935. In the Upper Peninsula, the wolf population was down to 100 wolves by 1956 and a mere six by 1973.

A shift in management came in 1965 when wolves were afforded legal protection in Michigan, and in 1974 were listed under the federal Endangered Species Act. Michigan classified it as an endangered species in 1976.

Through the 1980s, wolves filtered back into the Upper Peninsula, Roell said, with reproduction documented in 1989. The Michigan recovery goal to get the wolf off the Endangered Species list was to maintain a population of 200 or more for five consecutive years. That was achieved in 2004.

That was repeated in 2012 when the federal government delisted the wolves only to see a judge order the species back on the list after again being sued, Roell said.

In June, the DNR reported the Michigan wolf population has remained relatively stable over the past four wolf surveys, the most recent this past winter. DNR wildlife biologists estimated the Upper Peninsula had a minimum of 662 wolves among 139 packs this past winter, compared with 618 wolves in 2016.

Roell said track surveys and radio collars are used to count wolves, but technology now allows GPS collars to be used to upload data to a satellite.

Whatever the count method, wolves in Michigan remain a federally protected species that may be killed only in defense of human life.

“We’re still battling whether wolves should be delisted or not,” Roell said.

The Michigan Wolf Management Plan developed in 2008 and updated in 2015 has a list of accomplishments but no numeric goal, he said.

What is being done is managing population sizes, looking at human safety, studying depredation and wolf-prey relationships, and other issues, he said.

“Our plan says that you can have as many wolves as you want as long as you are controlling the negative aspects of wolves,” Roell said.

Unfortunately, what he has found is the plan has been “ignored and dismissed by both sides of the wolf fence.”

The big issue is the wolf harvest.

“The real crux of that is: Is it a recreational opportunity or a conflict resolution of one?” Roell said.

Public Act 520 of 2012 was signed into law in Michigan that added the wolf to the list of game species. The NRC asked the DNR for a recommendation, which after public meetings decided on a public harvest based on conflict resolution, Roell said.

In 2013, Public Act 21 was introduced that would authorize the NRC to designate game species; that same year, a wolf hunt was designated with a quota of 43 animals in the U.P. Twenty-two wolves were harvested, he said.

However, a group named Keep Michigan Wolves Protected collected enough signatures for referendums on the issue. Roell said the law was suspended until the 2014 vote.

In the 2014 general election, Michigan voters rejected two referendums on the trophy hunting and trapping of the state’s wolf population. Proposal 1 would have established a harvest season on wolves, while Proposal 2 would have granted the NRC the authority to designate wolves and other animals as game species.

Another group, Citizens for Professional Wildlife Management, wanted to get in “the referendum game” and started collecting signatures so the NRC would be allowed to designate a game species, give free military licenses and do appropriate work for invasive species.

This all became law without going to the ballot, so that meant wolves again could be hunted, he said.

In 2016, Senate Bill 1187, which, among other things, would include the wolf in the definition of “game” and authorize the NRC to designate a species as game, took effect. The bill also appropriated $1 million to the DNR for fiscal year 2016-17 to implement necessary management practices related to aquatic invasive species.

Because of that $1 million attached to it, the legislation was referendum-proof, Roell said.

So wolves are a game species in Michigan but cannot be hunted while classified as federally endangered, he said.

Which side is right?

It’s not like wolves are decimating the state’s white-tailed deer population, if that’s a factor in the debate.

“What drives deer (numbers) in Michigan is the winter,” Roell said.

However, he acknowledged the U.P. still has roughly 650 wolves. He believes that population will stay between 600 and 700 wolves, depending on the winters and the number of deer available.

The future for wolves includes a possible federal delisting yet again; Roell said the U.S. Fish and Wildlife Service has started that process.