House committee moving ahead with contempt vote for Barr 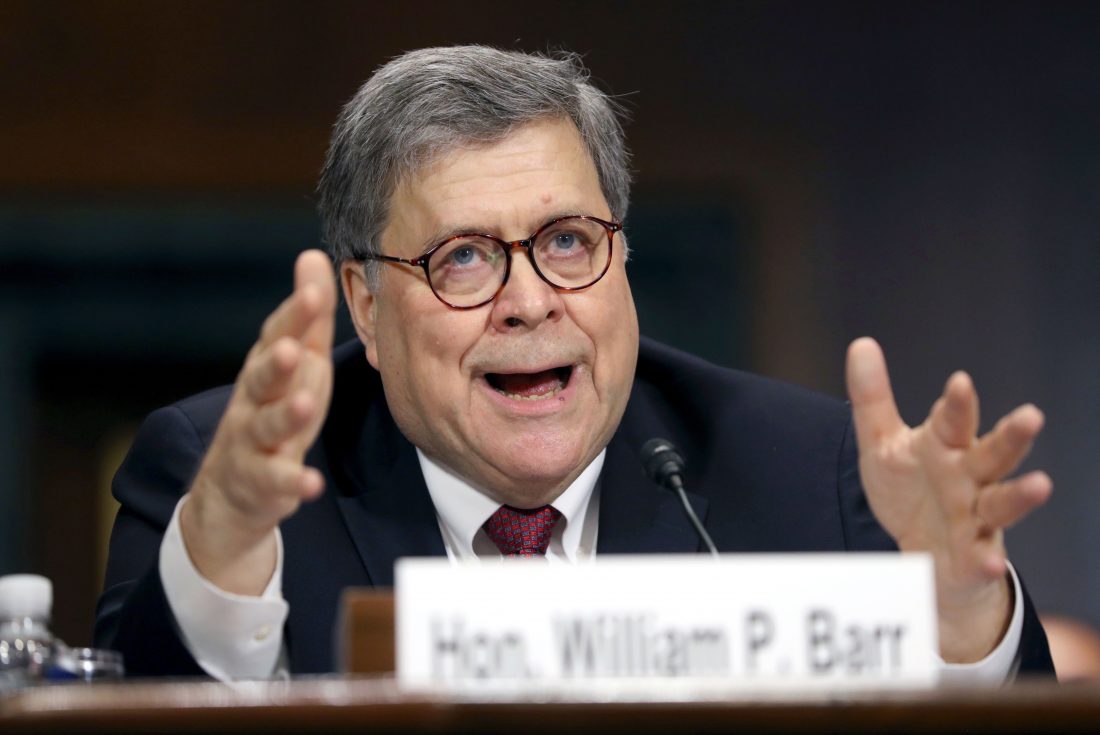 WASHINGTON (AP) — A House committee is poised to hold Attorney General William Barr in contempt of Congress — the opening salvo in what could be a lengthy, acrimonious court battle between House Democrats and President Donald Trump’s administration over special counsel Robert Mueller’s report.

House Judiciary Committee Chairman Jerrold Nadler scheduled a Wednesday vote to hold Barr in contempt of Congress, citing the Justice Department’s failure to provide the full text of Mueller’s report by the Monday morning deadline. Nadler, D-N.Y., said Barr’s failure to comply with a subpoena left them with “no choice but to initiate contempt proceedings.”

Nadler said the version of Mueller’s report that has already been released to the public offered “disturbing evidence and analysis that President Trump engaged in obstruction of justice at the highest levels.” Now, he said, lawmakers need the full version and the underlying evidence “to determine how to best move forward with oversight, legislation and other constitutional responsibilities.”

The committee said contempt proceedings could be postponed if the attorney general makes a “good faith” effort to comply with the committee.

In a possible thaw, Nadler said Monday evening that the Justice Department had agreed to meet with his staff Tuesday, adding that he hopes to make “concrete progress” toward resolving the dispute.

Justice Department spokeswoman Kerri Kupec said earlier that the department has “taken extraordinary steps to accommodate the House Judiciary Committee’s requests for information” regarding Mueller’s report, but that Nadler had not reciprocated. She noted that Democrats have refused to read a version of Mueller’s report with fewer redactions that has already been provided to Congress.

Kupec said officials were continuing to engage with the committee, and Nadler’s staff had been invited to the department “to discuss a mutually acceptable accommodation.”

If the committee approves the contempt resolution against Barr, as expected, it would head to the full House for final approval. But that step is unlikely to lead to criminal charges. A House vote would send a criminal referral to the U.S. attorney for the District of Columbia, a Justice Department official who is likely to defend the attorney general.

Yet by pursuing contempt, Democrats hope to send a message to the Trump administration about their willingness to invoke congressional powers in the majority. Beyond Mueller’s report, House Democrats have, so far mostly unsuccessfully, subpoenaed administration witnesses and made efforts to gain access to Trump’s personal and business financial records. Trump has said he will block those efforts, declaring he will “fight all the subpoenas.”

Democratic House leaders could file a civil lawsuit against the Justice Department to obtain the Mueller report, an option that could take months or even years to resolve. Some committee members have suggested they also could fine Barr as he withholds the information. They could also open impeachment proceedings against Trump, though House Speaker Nancy Pelosi has said she’s not interested in doing that, for now.

Republicans have lambasted the Democratic tactics as overreach and defended Barr. The top Republican on the Judiciary Committee, Rep. Doug Collins of Georgia, said “Democrats have launched a proxy war smearing the attorney general” when their anger actually lies with the president.

There is precedent for sitting attorneys general to be held in contempt of Congress. In 2012, the House held then-Attorney General Eric Holder in contempt over a botched gun-tracking operation known as Fast and Furious. Republicans cited the Justice Department’s failure to turn over, without any preconditions, documents related to the risky operation. The Justice Department took no action to prosecute the attorney general.

Mueller’s report — now a best-seller even in redacted form — states his investigation could not establish a criminal conspiracy between the Trump team and Russia. However, it did not reach a conclusion on whether Trump obstructed justice. Mueller didn’t charge Trump but wrote he couldn’t exonerate him, either.

House Judiciary Democrats say Congress is “the only body able to hold the president to account” since the Justice Department has a policy against indicting a sitting president. They say they need the full report and the evidence it cites, including witness interviews and “items such as contemporaneous notes.” Nadler also wants every member of Congress to be able to read the full report.

As the fight with Barr has escalated, Democrats have been in negotiations to hear from Mueller himself. Trump complicated those talks Sunday by tweeting that he would oppose Mueller’s testimony, reversing from his earlier position of leaving it up to Barr.

As long as Mueller remains a Justice Department employee, Trump or Barr could block him from appearing. Trump did not indicate if he would take steps to do so. It’s unclear when Mueller will leave the department — or whether he would want to testify in his own capacity when he does.

Nadler said last week the committee was “firming up the date” for Mueller’s testimony and hoped it would be May 15. The Justice Department declined to comment.