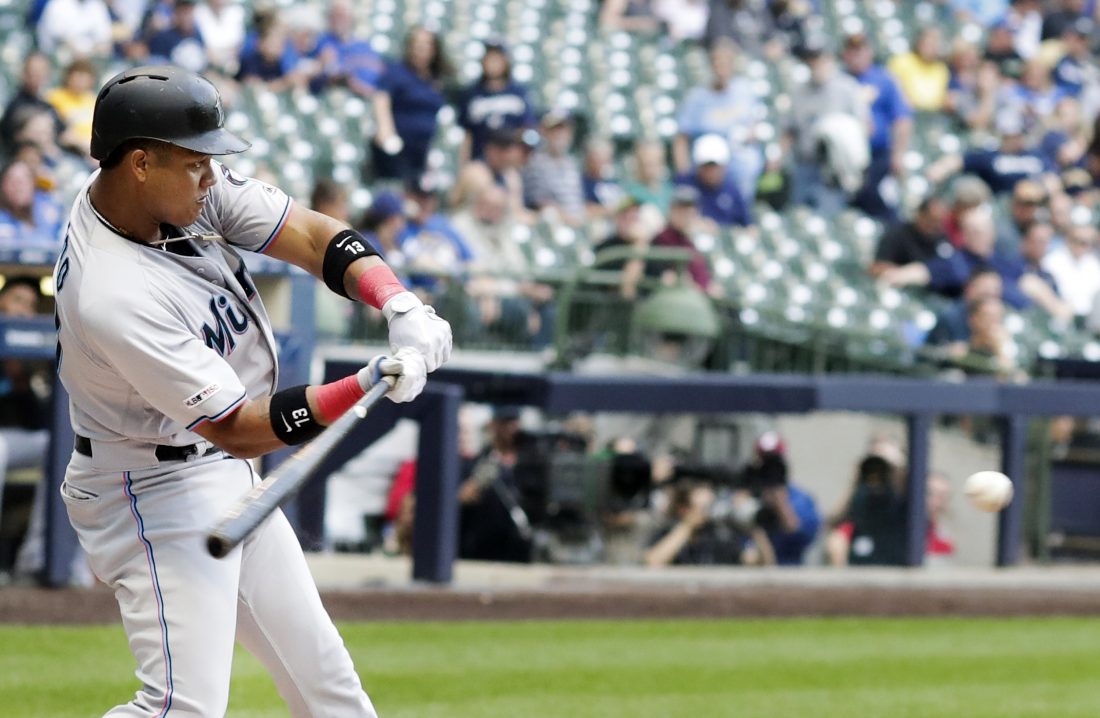 MILWAUKEE (AP) — Garrett Cooper is collecting hits in bunches for the Miami Marlins.

Sometimes twice in one inning.

Cooper had two hits and scored twice during Miami’s franchise-record, 11-run fifth inning, leading the Marlins to a 16-0 victory over the Milwaukee Brewers on Tuesday night.

“It’s been a good team collective effort the last couple weeks,” Cooper said, “sticking to our plan, sticking to our game plan as a group and not shying away from that.”

Cooper matched a career high with four of Miami’s 19 hits as the Marlins got their 12th win in 17 games. It was the highest scoring performance for the last-place Marlins since a 22-10 victory at Texas on July 26, 2017, and their most hits since they had 22 last July 8 at Washington.

“We’ve been having a pretty good approach for a while now,” manager Don Mattingly said. “Tonight was just kind of crazy.”

Every player in Miami’s starting lineup had at least one hit, scored at least once and drove in at least one run. Even pitcher Pablo Lopez got into the act, hitting an RBI double in the fifth that drew a hearty round of boos from the Miller Park crowd of 25,364.

Milwaukee had won five of seven. But it was shut down by Lopez (4-5) and three relievers, finishing with six hits in its worst loss of the season.

“Look, you want to forget this one as fast as you can,” manager Craig Counsell said.

It was already 4-0 when Chase Anderson (3-1) was pulled after four ineffective innings. And it only got worse for the Brewers from there.

Miami collected three doubles and six singles while sending 15 batters to the plate in the fifth . After Castro struck out, nine consecutive batters reached safely before Ramirez grounded out for the second out.

Cooper, a sixth-round draft pick by the Brewers in 2013, led off with a single and scored on Ramirez’s double. He also singled in Lopez and scored on Castro’s double, making it 13-0.

“I’ve never seen anything like it,” Counsell said. “Couldn’t get out of it. That’s what happened.”

Cooper, who has battled injuries over the past couple years, also singled twice during Miami’s five-run fourth inning in Saturday’s 9-3 victory at San Diego. He is the first Marlin to collect multiple hits in an inning multiple times in a season since Derek Dietrich in 2015.

When the fifth ended on Jorge Alfaro’s strikeout against Corbin Burnes, Milwaukee’s second pitcher of the inning, the crowd cheered sarcastically. Counsell turned to Hern·n Perez for the ninth, and the utilityman worked a perfect inning in his sixth career pitching appearance.

Lopez matched a career high with seven strikeouts in six innings. The right-hander allowed three hits and walked one.

The Brewers got a kick out of Perez’s pitching performance. He retired Brian Anderson and pinch-hitter MartÌn Prado on popups before Ramirez grounded out.

“I just try to throw the ball over the plate and see what happens,” Perez said. “Sometimes when you’re a hitter, you want to get a hit so bad over another position player, that’s why I think they miss.”

Brewers INF Travis Shaw (right wrist strain) was activated from the injured list. He started at third and went 2 for 3 with a walk.

Jimmy Nelson starts Wednesday for Milwaukee in his first major league appearance in almost two years. The right-hander is coming back from shoulder surgery after he got hurt in September 2017 on a dive back into first after rounding the base on a single. Sandy Alcantara (2-5, 4.08 ERA) pitches for Miami.