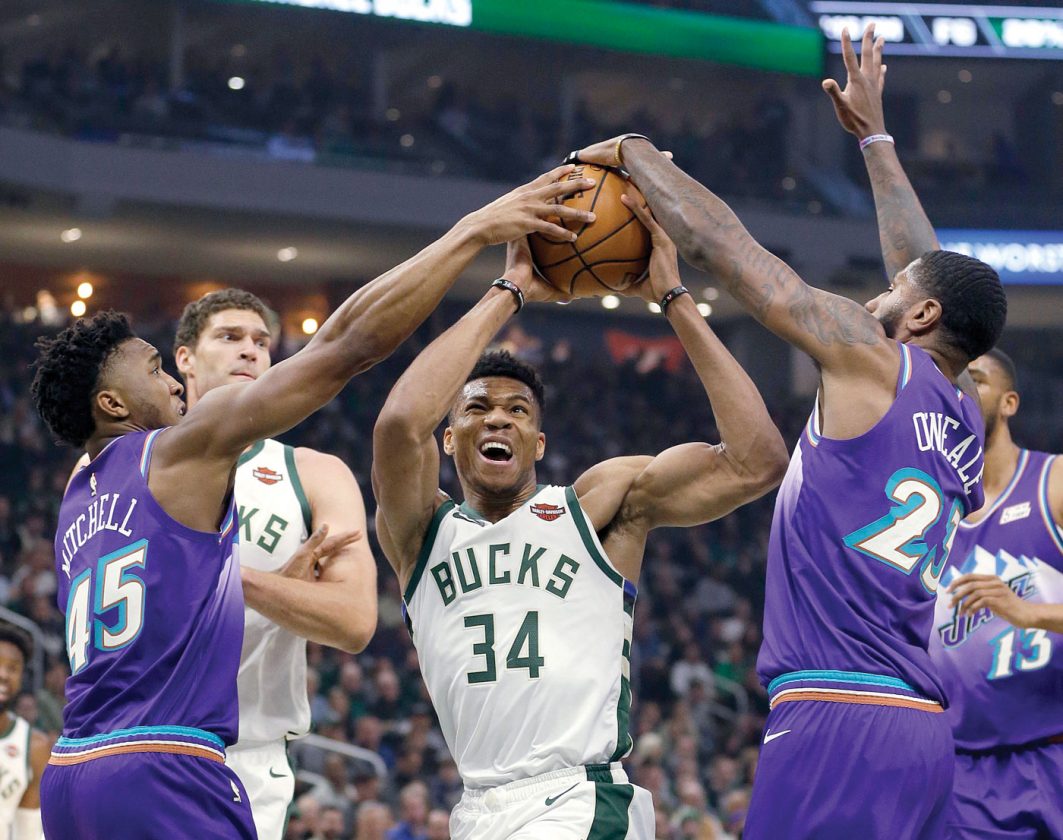 AP Photo Milwaukee’s Giannis Antetokounmpo is fouled as he drives between Utah Jazz's Donovan Mitchell (45) and Royce O'Neale (23) during the first half Monday.

MILWAUKEE (AP) — Giannis Antetokounmpo had one of the most dominant games of his career and the Milwaukee Bucks needed every bit of it.

Antetokounmpo scored a season-high 50 points and grabbed 14 rebounds for his 17th consecutive double-double to help the Bucks rally in the second half for their eighth straight victory, 122-118 over the Utah Jazz on Monday night.

“We threw everything at him. We threw everybody at him. We threw double-teams and he made plays out of the post,” said Jazz guard Mike Conley. “He got to the free throw line. When he started making the long-range shot, that really makes it tough. I was proud of the way we defended. We tried rebounding and tried to box him out, and he was too tall, too long.”

Milwaukee led 120-113 with 1:24 left, but Bojan Bogdanovic countered with a 3-pointer and Donovan Mitchell followed with a layup to make 120-118 with 43 seconds left. The Bucks missed on their next possession, but Brook Lopez blocked Mitchell’s driving layup attempt with 4.4 seconds remaining.

Wesley Matthews added 19 points and Eric Bledsoe 13 for the Bucks, whose last loss was at Utah on Nov. 8.

Antetokounmpo’s streak of double-doubles is the longest to begin a season since Bill Walton opened with 34 straight in 1976-77. Antetokounmpo, who had 32 points in the second half, played 38 ½ minutes and did not commit a turnover.

“I’m impressed, I’m not going to lie to you,” said Antetokounmpo, the reigning MVP. “Great game and all that. My second 50-point game of my career. Doing it with zero turnovers and all that, that’s great. I see that they made 21 3s, and as a team we were still able to be in the game and still win the game. At the end of the day, all that matters is a win.”

Milwaukee trailed 57-48 at the half, going just 3 of 17 from 3-point range, but pulled even with a 10-0 run midway through the third quarter. Antetokounmpo’s 3-pointer from the top of the key tied it at 74 with 5:28 left in the period.

“The third quarter stood out, where we played well on both ends,” Bucks coach Mike Budenholzer said. “(We) had enough stops. More importantly, against a good team, we were able to make some shots. I was really pleased with the third quarter.”

The Jazz used a 10-0 run early in the second quarter to go in front 35-25. Milwaukee missed seven consecutive shots during that span, including 0 for 5 from beyond the arc.

Utah was aided by a six-point swing midway through the second quarter. Bledsoe’s short pull-up jumper from the right baseline was negated when he was called for an offensive foul for jumping back into Bogdanovic. The Bucks challenged, but the call was upheld, and Budenholzer then was called for a technical. Bogdanovic made the free throw and then drilled a 3-pointer on the ensuing possession to put Utah up 39-29.

“We pride ourselves on being a team that’s going to play late (in the postseason),” Mitchell said. “But we’ve got to grind and get to that point. We could have got them tonight, but Giannis got 50. He’s the MVP for a reason.”