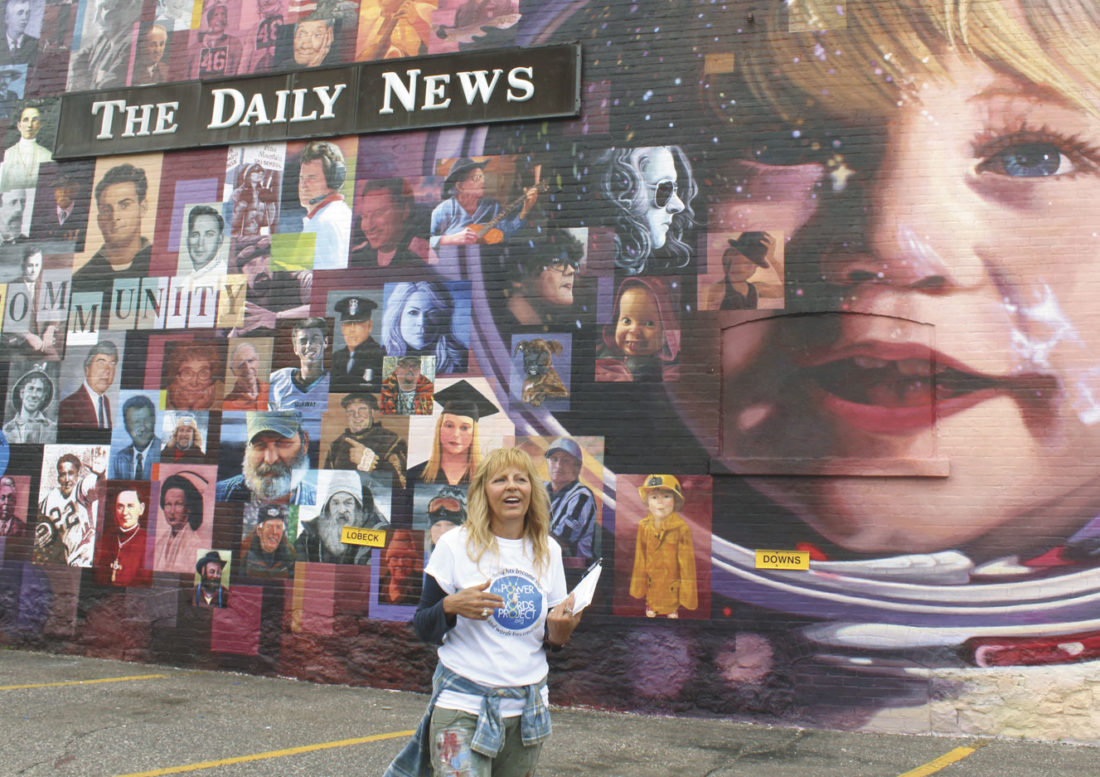 Theresa Proudfit/Daily News Photo IRON MOUNTAIN NATIVE Mia Tavonatti talks to the public about her desire to build appreciation for art and plans to paint at least nine more murals in the downtown area in the future. The wraps came off the second Power of Words Project mural, based on the word “community,” Thursday evening.

In the week since it was unveiled June 29, the most recent Power of Words Project mural has drawn a steady number of viewers to the west wall of The Daily News building at 215 E. Ludington St. in downtown Iron Mountain.

The mural, based on the word “Community,” contains about 80 portraits of people from the region. Those who visit often seem to search among the images, perhaps for those they recognize, even relatives or friends. Many take photographs of themselves alongside the artwork.

The reception proves the word — and design — was a good choice for the second in the series of Power of Words artworks in downtown Iron Mountain.

One late, and welcome, addition was the image of Bryan Stanchina, the 17-year-old Norway High School student who drowned June 13 while trying to help another struggling in the Menominee River. Artist Mia Tavonatti is to be credited for adjusting her design so far along in the process.

The new mural joins the original 2013 work on the wall of Blackstone Pizza on East Hughitt Street, designed around the word “Believe.”

Tavonatti, of the Svetlana Foundation, has indicated she wants to put up nine more murals in her native Iron Mountain.

“I have a thing for the number 11,” the artist said at the unveiling of the new mural. “I already have my walls picked.”

The Downtown Development Authority, a partner in the project, has indicated it’s pleased with Tavonatti’s efforts so far and would support more.

If the results complement the downtown as much as the first two Power of Words projects, Iron Mountain should hope to see the next nine murals come to fruition.

Bouquet From Paula Moroni, Aurora, Wis.: Last Saturday, we had the pleasure of attending the bowling event at ...

Like seasonal birds, ski jumpers from around the globe have made their annual mid-February arrival in Iron Mountain ...

Local and state media have reported that cyber scammers are pilfering residents’ identities and using the theft ...

Make sure new technology is reliable

These days, it seems as if there is an “app” for everything. But the fiasco last week with the Iowa Democratic ...

Know of an individual or group in the Upper Peninsula whose efforts help make the region a healthier place to ...