The Golden K Club took a road trip to the Niagara Area Historical Museum, where they learned about the history of the city. From left are Golden K members Myrna Ward and Paul Ward. 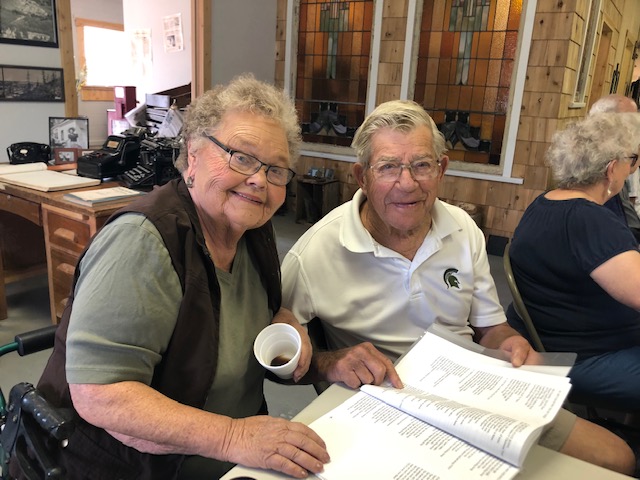 The Golden K Club took a road trip to the Niagara Area Historical Museum, where they learned about the history of the city. From left are Golden K members Myrna Ward and Paul Ward.

They did it! The Golden K went on a field trip. Branching out, they gathered at the First Presbyterian parking lot, car pooled and headed on to Niagara, Wis..

Meeting up with other G K members who drove themselves there, the group was met at the door by Karen Klenke, president of the Niagara Area Historical Museum.

A large “welcome” sign greeted everyone and with the expertise of Karen’s able volunteers, Lois Outcelt, Louise Swope, Char Tomassi and Arnie Haavisto, guests were seated and waited upon. As the doughnuts made their appearance, the coffee was poured, the seniors settled into some lively conversation.

Outcelt, a GK member, led the group into singing acappella “The More We Get Together — The Happier We Will Be,” which was very appropriate for this group. “I Have the Joy, Joy, Joy Down in My Heart” and “Ain’t We Got Fun” rounded out the singing.

The group took time to wish happy anniversary to John and Diane Aune on Aug. 7 and Don and Sally Jacobs on Aug. 8. 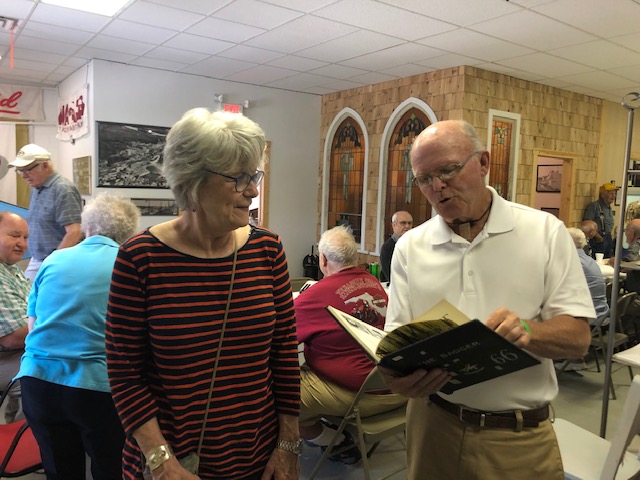 Then a moment of remembrance, singing “Auld Lang Syne” for former members Richard Walsh and Bob Lee, concluded the business for this day.

The Niagara Area Historical Society has been working diligently since 1994 putting this museum together. As with all communities, there are stories to be told and history to be recorded for future generations to learn how, when and where their heritage began.

Remember the Kimlark Inn, which became Maryhill Manor, which is now the Red Brick and Red Eye Saloon? The many stories behind the “bluffs” and the Niagara Mill that make up a small part of Niagara’s history?

The museum had its first home on Main Street. It soon outgrew this building and had to be packed away for a few years. The community was not idle during this time — it continued to work toward purchasing its current location. Working only with donations and private funding, such as grocery receipts from Tadych’s and Super One, the dedicated volunteers and strong community support secured the site.

They are proud of their efforts and especially the “Kids Korner.” With plans in the future for more improvements and surprises awaiting schoolchildren as they come to visit, it is well worth taking some time to check out this museum. You may find some familiar faces decorating those walls and remember the stories that go with them. They are open to groups, family reunions or class reunions. Call Klenke and set up a schedule.

Within each community, there are memories, stories and experiences to be found in the museums. Visiting the many displays someone took many hours to prepare can be a rewarding experience for you and your family. Who knows — you may have a great time, as did the Golden K. Thanks to our hosts at the Niagara Historical Museum. It was a stroll through past memories for many of the Golden K seniors. As they toured the museum, past experiences were shared with each other.

The Golden K will meet Monday at the First Presbyterian Church. Tamara Juul will be guest speaker. All are welcome. The Golden Throats will sing Wednesday at ManorCare.

AURORA, Wis. — Northwoods Beekeepers will meet at 6:30 p.m. Tuesday at the ball park pavilion in Aurora. This ...

IRON MOUNTAIN — The free Movies in the Park are returning to Lake Antoine. The first movie is “Back to the ...

IRON MOUNTAIN — A Pulmonary Support Group has been established for anyone with a chronic lung disease, on oxygen ... 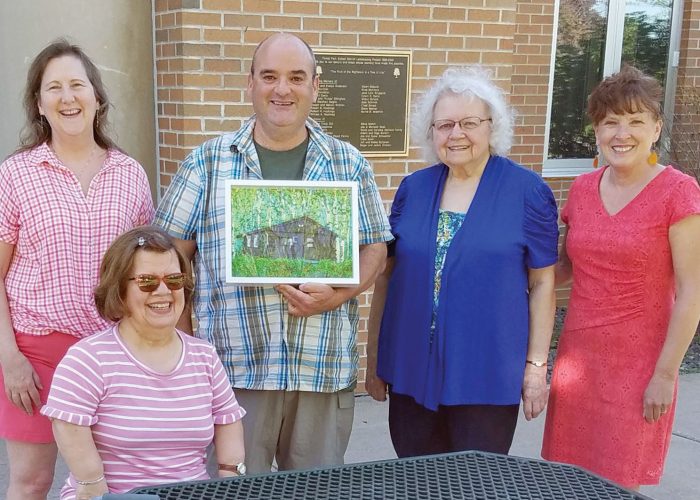