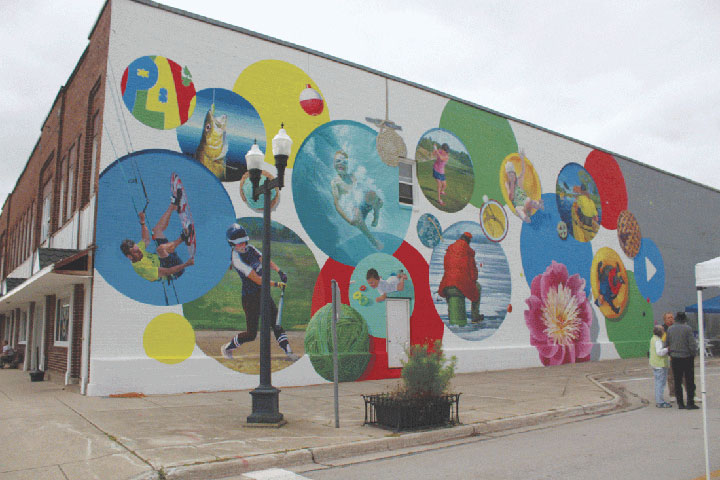 Clarissa Kell/Daily Press photo | THE NEW POWER of Words Project mural in Gladstone, based on the theme word “play.”

GLADSTONE — A new Power of Words Project mural had its unveiling Friday in Gladstone.

The mural, painted on the east-facing wall of the Rialto Center, was themed around the word “play.”

“We want to talk about how excited we are about the expansion of the Powers of Words Project. This is the eighth mural in the U.P. It is also the biggest mural in the U.P.,” said Heisdy Maldonado, one of the artists who traveled from out of state to help paint the mural.

The Power of Words Project was established by artist and Iron Mountain native Mia Tavonatti and her Svelata Foundation in an effort to have public art inspire growth and focus in a community.

The mural in Gladstone was the second of three murals completed in 2019, along with Manistique and Marquette, which still is being worked on. The three murals this year will bring the total Power of Words Project murals to nine in four counties in the Upper Peninsula, five of them in Iron Mountain, Maldonado said.

Ken Benson, who helped with some of the painting and housing of artists, explained during the ceremony that the people and items depicted in the mural were local to Gladstone.

He noted the man windsurfing is Rick Elrod and the baby is the artist Berg’s grandson.

The Gladstone mural was made possible with an Artplace grant through CUPPAD, a Michigan Developmental Education Consortium Public Spaces for Community Places grant, and many donors and sponsors, including Svelata Foundation, Water’s Edge Chiropractic, State Bank, mBank, VanAire, Visit Escanaba and Thrivent Financial.

The Gladstone Downtown Development Authority also approved a facade grant to prepare the wall for the mural.

For more information about the Power of Words Project, go to powerofwordsproject.org.

Reader is too focused on finding ‘the one’

Dear Annie: I am a 30-year-old woman who is trying to find my perfect match. I have tried all the dating websites ...

The day we catch up