O’Reilly is out at Fox but influence endures; career too? 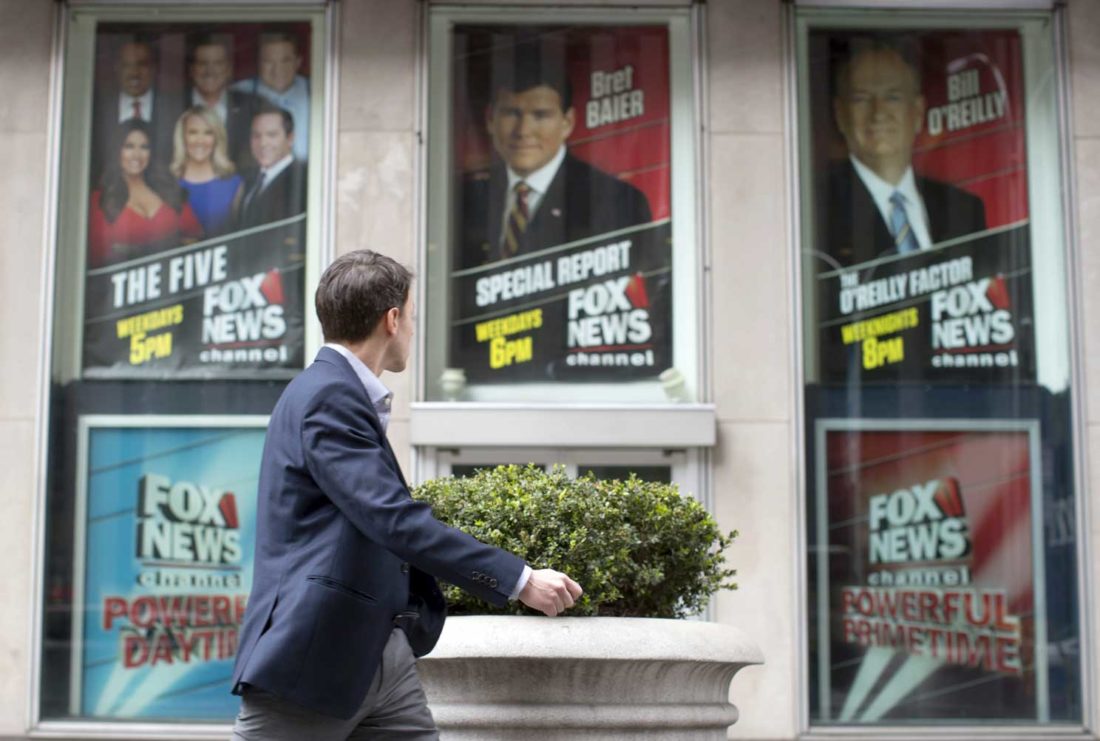 AP Photo/Mary Altaffer A pedestrian walks past the News Corp. headquarters building in New York displaying posters featuring Fox News Channel personalities including Bill O'Reilly, right, on Wednesday. O'Reilly has lost his job at Fox News Channel following reports that five women had been paid millions of dollars to keep quiet about harassment allegations. 21st Century Fox issued a statement Wednesday that "after a thorough and careful review of the allegations, the company and Bill O'Reilly have agreed that Bill O'Reilly will not be returning to the Fox News Channel.

LOS ANGELES (AP) — Despite the inglorious end to Bill O’Reilly’s two-decade Fox News Channel career, observers say his deep imprint on Fox and other cable news outlets and his influence on barbed political discourse are intact for the foreseeable future.

Fired on Wednesday amid a drumbeat of sexual harassment allegations, the vacationing host’s “The O’Reilly Factor” was quickly redubbed “The Factor” and Fox News announced his time slot will be filled by Tucker Carlson, another adamantly conservative Fox host who dovetails with the channel’s audience.

But it was O’Reilly who created the template for how to succeed in cable TV punditry, delighting his viewers with unapologetic attacks on liberal politicians and media members that he delivered with gusto.

“In many ways, he led Fox’s cable news revolution,” said Frank Sesno, a journalism professor at George Washington University and former CNN Washington bureau chief. “Cable news is someone standing on a mountain top shouting, and Bill O’Reilly was on the highest peak so he echoed across the landscape.”

And he keeps echoing in the broader media landscape. O’Reilly’s success at appealing to like-minded viewers made him and Fox into cable news leaders.

His ratings made him Fox’s most lucrative personality, with his show generating $178 million in advertising revenue in 2015, according to Kantar Media. There was the prospect of even more, with his audience larger in the first three months of 2017 than it has ever been.

Then came an April 1 report in The New York Times that five women had been paid a total of $13 million to keep quiet about disturbing encounters with O’Reilly. While O’Reilly denied wrongdoing, dozens of his show’s advertisers fled within days even as O’Reilly’s viewership increased.

Following the Times story, Fox parent company 21st Century Fox said it had asked the same law firm that investigated Ailes to look into O’Reilly’s behavior. 21st Century Fox leaders Rupert Murdoch and his sons Lachlan and James said in a memo to Fox staff that their decision to ax O’Reilly came following an “extensive review” into the charges.

O’Reilly lost his job on the same day he was photographed in Rome shaking the hand of Pope Francis. In a statement, he called it “tremendously disheartening that we part ways due to completely unfounded claims.”

O’Reilly’s lawyers said he was the victim of an orchestrated campaign by liberal organizations like Media Matters for America, which contacted his advertisers to pressure them to leave the show. Conservative personality Glenn Beck — who once lost a job at Fox because a similar campaign choked his program of paying advertisers — came to O’Reilly’s defense on his radio show and called on viewers to pressure Fox, to no avail.

O’Reilly had ruled the “no spin zone” on television with a quick smile and an even quicker temper. He pushed a populist, conservative-leaning point of view, and was quick to shout down those who disagreed with him.

O’Reilly and President Donald Trump are both “crowd-pleasing showmen who know how to signal to loyalists in their audience that they are not taking themselves quite as seriously as their detractors are,” said news consultant Andrew Tyndall. “Half of the fun that they have with their audiences comes from watching the outrage that they manage to provoke.”

O’Reilly’s “Killing” historical series, including “Killing Lincoln” and “Killing Reagan,” have consistently sold 1 million or more copies in hardcover, a rare achievement in publishing, and his platform on Fox enabled him to promote his work. He has also had best-sellers with everything from the memoir “A Bold Fresh Piece of Humanity” to his most recent work, “Old School,” which includes passages urging the respectful treatment of women.

O’Reilly and co-author Martin Dugard are due to release another book in the “Killing” series in September, and a spokeswoman for publisher Henry Holt and Co. said that plans had not changed.

Even with O’Reilly gone from Fox, Sesno said he doubts that the public appetite for his brand of “angry, high-decibel” chatter will give way to a new regard for civility.

“Nation, shame on you. You failed him, you failed Bill O’Reilly. You didn’t deserve this great man,” Colbert said, channeling his Comedy Central character. “And what, suddenly sexual harassment’s a crime?”