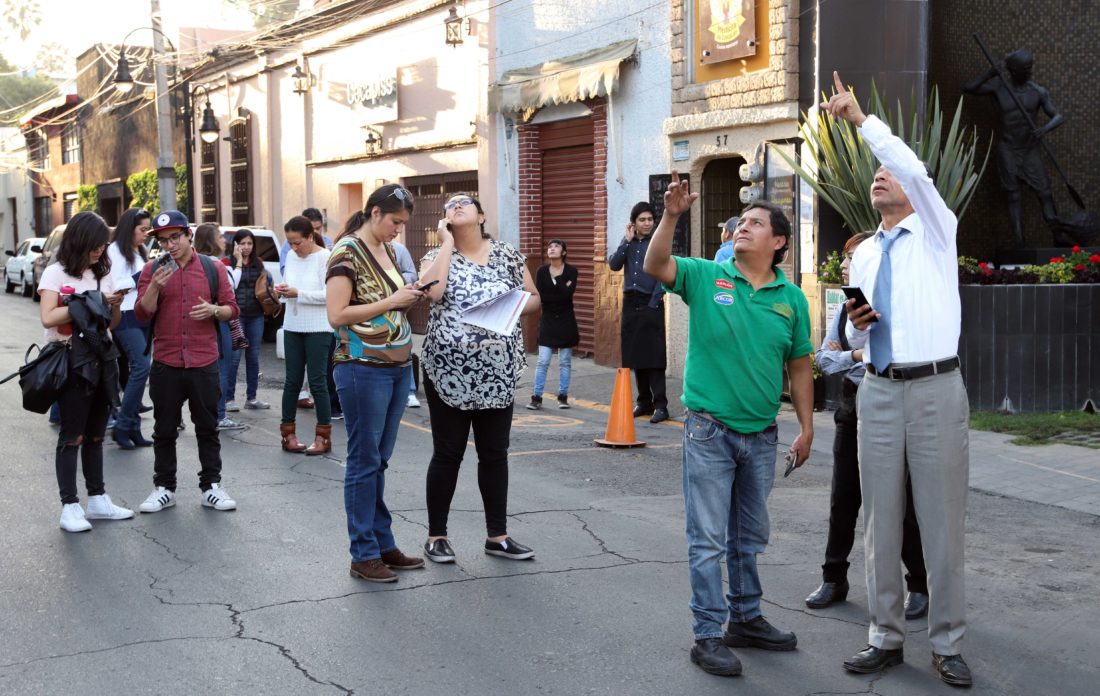 Crowds gathered on Mexico City’s central Reforma Avenue as well as on streets in Oaxaca state’s capital, nearer the quake’s epicenter, which was in a rural area close to Mexico’s Pacific coast and the border with Guerrero state. There were no immediate reports of deaths.

“It was awful,” said Mercedes Rojas Huerta, 57, who was sitting on a bench outside her home in Mexico City’s trendy Condesa district, too frightened to go back inside. “It started to shake; the cars were going here and there. What do I do?”

She said she was still scared thinking of the Sept. 19 earthquake that caused 228 deaths in the capital and 141 more in nearby states. Many buildings in Mexico City are still damaged from that quake.

The U.S. Geological Survey originally put the magnitude of Friday’s quake at 7.5 but later lowered it to 7.2. It said the epicenter was 33 miles northeast of Pinotepa in southern Oaxaca state. It had a depth of 15 miles.

Mexican Civil Protection chief Luis Felipe Puente tweeted that there were no immediate reports of damages from the quake. The Oaxaca state government said via Twitter that only material damages were reported near Pinotepa and Santiago Jamiltepec, but that shelters were opened for those fleeing damaged homes.

The Mexico City Red Cross said via Twitter that the facade of a building collapsed in Mexico City’s Condesa neighborhood, which was hit hard on Sept. 19. A video showed people walking through a dust cloud. But reporters at the scene later found no evidence of a collapse at the location given.

About an hour after the quake, a magnitude 5.8 aftershock also centered in Oaxaca caused tall buildings in Mexico City to briefly sway again.

USGS seismologist Paul Earle said Friday’s earthquake appeared to be a separate temblor, rather than an aftershock of a Sept. 8 earthquake also centered in Oaxaca, which registered a magnitude of 8.2. The Sept. 19 earthquake struck closer to Mexico City.

The Sept. 8 quake killed nearly 100 people in Oaxaca and neighboring Chiapas, but was centered about 273 miles southwest of Friday’s earthquake, Earle said.

In Mexico’s capital, frightened residents flooded into the streets in Condesa, including one unidentified woman wrapped in just a towel, but there were no immediate signs of damage.

“I’m scared,” said Rojas Huerta, recalling five months ago when buildings fell as she ran barefoot into the street. “The house is old.”