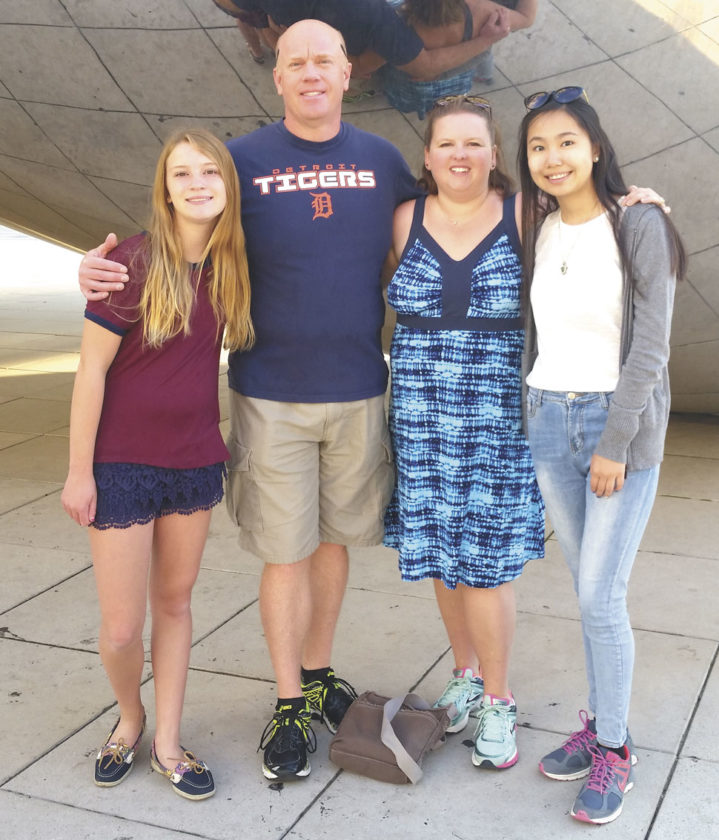 MEMBERS OF THE Schoenborn family in Iron Mountain are shown here with their ninth exchange student — Zhaniya Akmaden of Kazakhstan. The host family took her to Chicago over Labor Day weekend. From left are Ailie, Craig and Candy Schoenborn with Akmaden. Not pictured is host sister Emma Schoenborn.

IRON MOUNTAIN — In the past two years, schools in the region have welcomed 23 foreign exchange students into their classes.

The 2015-16 academic year saw 10, with half of them at Niagara High School in Wisconsin. North Central, Forest Park, Kingsford and Iron Mountain all had exchange students as well.

But this year, only two area districts are hosting a single student apiece: Iron Mountain has junior Zhaniya Akmaden from Kazakhstan and Florence High School in Wisconsin has Peer Budzinski from Germany.

School administrators and those who work with placement programs such as Michigan State University’s Future Leaders Exchange, or FLEX, were hard-pressed to come up with reasons for the drop-off.

One factor may be the local coordinator for the International Student Exchange has moved from Niagara.

Katie Waugen had served as coordinator for several years and was responsible for bringing four German students and one Spanish student to Niagara last year. And in 2015, Niagara hosted eight of 13 foreign exchange students in the region, from Germany, Spain, Poland and Montenegro.

D’Ann Rohrer, who handles placing students through MSU’s FLEX program, said she could find only one local host household this year. That same Iron Mountain family will host again next year, but FLEX has three more students they’d like to bring in, Rohrer said.

“All we need are families to step forward and take a student for the school year,” Rohrer said.

The Schoenborn family in Iron Mountain — parents Scott and Candy and daughters Emma and Ailie — have hosted nine foreign exchange students, including Akmaden, since 2003-04.

They have always selected students from the FLEX program, which was developed in 1992 to build relations with the U.S. and the countries of the former Soviet Union. They have now expanded to include a couple of other countries and Russia pulled out in 2014.

The students coming from the FLEX program go through a very strict selection process. Michigan this year has more FLEX students than any other state.

“Our girls have grown up with an extra sister in the house. Our family has enjoyed the opportunity to get to know other students and learn about other parts of the world. It is always emotional when the girls leave in the spring. They truly become a part of our family; calling us mom and dad and argue and laugh with our girls,” Candy Schoenborn said.

She added that they communicate with all of their former students and have had the opportunity to visit some of them.

Schoenborn said she isn’t sure why participation is down this year, but she knows some past host families no longer have children in high school.

The FLEX/4-H program plans a number of activities for students and host families. They include a mid-term gathering where the students share a presentation about their country. They also host a departure orientation to help the students prepare for returning home.

“When considering hosting, you have to realize you are responsible for that student. You have to help them and guide them through class selection, making friends and good decisions,” Schoenborn said. “The students have good days and some days they struggle. Fortunately the good days outnumber the bad.”

Many people mistakenly think the students need their own room, but the FLEX program allows for sharing with a host sibling, Schoenborn said. FLEX also has staff to support the host families and students.

“That is the main reason we like this particular program,” Schoenborn said.

School administrators were equally puzzled by the decline in exchange students. Kingsford High School Principal Lyle Smithson said they had no requests for placements this year and would have been open to any students who wanted to attend KHS.

He speculated Waugen’s departure may have played a role.

Rohrer said anyone interested in hosting a high school exchange student for the 2017-18 school year can contact their program at 231-757-4789 or drohrer@anr.msu.edu.

Exchange students all are listed on personal information sheets for families to choose from. They are 15 to 18 years old and can be sophomores, juniors or seniors.

For more information, go to www.states4hexchange.org/year-long.