A place for dogs in City Park 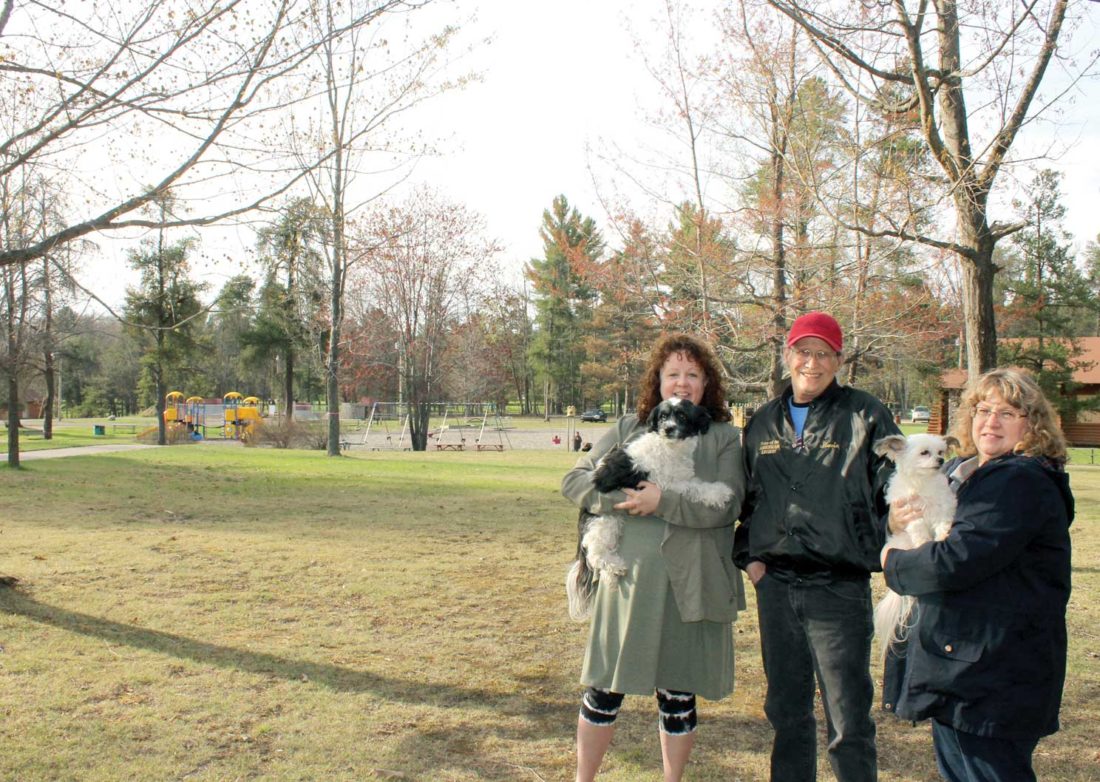 IRON MOUNTAIN — Part of City Park in Iron Mountain is going to the dogs.

The Friends of City Park plan to add a dog park this summer, as well as several new pieces of playground equipment.

“The dog park has been in the works for two years,” Friends of City Park president Caroline Sullivan said. “Going through all the proper channels and getting things approved takes time.”

The dog park will be near the tennis courts. Dale Alessandrini, a Friends board member, said they are taking measurements to make sure they will have enough room for two separate areas — one for smaller breed dogs, another for large dogs.

Dogs will be able to run free but still be supervised by their owners.

“Benches and seating will be placed inside the park so the owners will be able to relax and read a book while their dog plays,” Alessandrini said.

A container will be added as well to house disposable bags for doggy waste clean-up.

The new playground equipment includes replacing the old merry-go-round with a “cooler” one, and a zip line for kids that will run from pole to pole across the wood chip area.

One special feature will be an egg chair for children with autism.

“These eggs keep out the loud noises — I think they will really enjoy this,” Sullivan said.

Even exercise equipment will be available for adults or older children, she said.

“Parents can’t leave their children to use the walking trail,” Sullivan noted. “This gives them something to do, as well as get exercise.”

Friends are hoping the new equipment will be in place in time for their annual Saturday in the Park fundraiser in late July.

In the future, they have a more ambitious vision for a splash water pad. Alessandrini said this project still is in the planning stages.

“We have a lot to discuss with the city of Iron Mountain officials, including maintenance and if it’s

Sullivan has already gone over designs for the water feature.

“We want to make sure it has something for everyone,” she said. “For the toddlers, older children and even those in wheelchairs.”

The project may take up to two years to accomplish, she added.

They also are discussing a permanent concession stand in the park if the water feature is a hit with the public.

The ultimate goal, Sullivan said, is to bring more people to the park.

“A lot of people don’t even know there is a skate park now, which is doing very well,” she said.

The Friends have steadily made additions and improvements to the park over the past several years, including new bathrooms and a pavilion, all primarily paid for with money raised during the Saturday in the Park event.

They also benefit from volunteer labor that cuts down on costs, Sullivan said.

This year’s Saturday in the Park will be July 20-21. Headlining on Saturday is Bad Axe Rodeo featuring Daryle Ryan of Texas, the band’s original lead singer. Other local bands playing the weekend are Unhushed Grace, Next Myle, Jerry Pirkola, Local Brew and 141 North.

Sullivan said Andy Gibbons, who took over for Ryan as lead singer of Bad Axe Rodeo, will headline the 2019 fundraiser.

They have added new features and vendors this year, including a larger tent, more bounce houses and Smokler’s BBQ and Catering and JPN Vendors.

No tickets will have to be purchased for food vendors. Tickets will only be used for beverage sales.

Bracelets for the bounce houses will be $10 a day for unlimited use. The committee is still looking for other children activities for the weekend.

“Anyone who has a petting zoo and would like to take part — we would love it,” she said.

Sponsors as well as volunteers are needed as well. Anyone who would like to help can contact Sullivan at 906-396-1380, or go to the Saturday In the Park Facebook page.

“We are planning a bigger and better event this year,” Alessandrini said. “We stress everything we earn goes back into the park.”