Be a good neighbor to wildlife 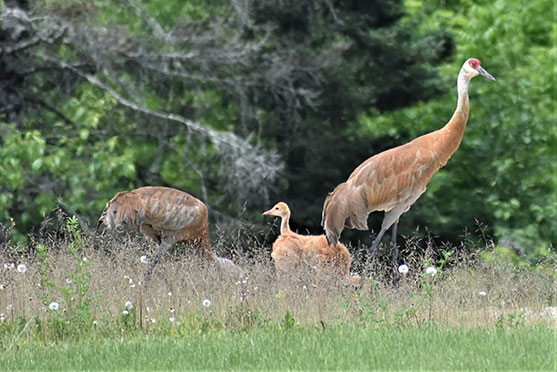 With summer vacation activity picking up, those out on the lakes, rivers or roads need to watch for wildlife.

Much of this year’s wave of babies should be old enough to be mobile, as opposed to sitting in a nest or den.

After spending the first few weeks of life bedded down and hidden, fawns have reached the age to start tagging along with the doe, said Bill Scullon, field operations manager for the wildlife division of the Michigan Department of Natural Resources.

That doesn’t mean they’re particularly good yet at keeping up with mom, though, Scullon said. And it’s why road kill deer can seem to tick up around this time of year, he said.

So the doe may linger in the road too long, waiting for the fawn to get in gear. Or the fawn may get distracted and confused dealing with the strangeness of crossing a road, with its hard blacktop surface and open spaces.

For drivers, a little more caution and a little less speed might be prudent until this year’s crop of fawns get more savvy about traffic, Scullon said.

It helps this is the time of year when deer have a reddish coat that stands out from the green foliage. They also tend to be more mobile during the daytime, rather than at night, he said.

Deer are not naturally nocturnal, he said, but adopt that behavior in the fall during hunting seasons. In the height of summer, they can be very active during the day, although peak movement still tends to be dawn and dusk, Scullon said. And if the weather is sweltering, as is expected today, they will bed down in the shade and wait for cooler conditions in the evening or morning.

The deer also are more visible because there are more of them out there, Scullon said. The herd in the Upper Peninsula, especially in the southern counties, seems to be “rebounding well” from the hit taken during several severe winters early in the decade.

Most birds now have youngsters that are venturing out as well. The two pairs of sandhill cranes that can be reliably seen off Six Mile Lake Road and on M-69 each have two gawky, well-grown colts still surviving. A number of songbirds already are fledging, the turkeys have poults with feathers and the lake’s Canada goslings are maturing quickly.

The temptation in seeing all these young, fuzzy babies might be to try to get a better look, perhaps even pick one up if it can be caught, for a photo op. But Scullon advised people keep their distance, so the parent doesn’t get stressed — or worse, abandon the nest or offspring.

Loons, in particular, can be sensitive to disturbance, he said.

He also asked that those out on the water be aware of these new youngsters and take care to avoid them when using motorized watercraft.

This month, we had a dead turtle floating among the lily pads just off the dock at Six Mile Lake. It appeared to have been struck by a boat propeller, although we have no way of knowing whether that caused its death or if it succumbed to something else and later got hit while bobbing on the surface.

It was a reminder, though, that we need to be good neighbors with the lake’s other inhabitants and give them proper space.