Crews work on trails amid new flooding in Houghton County 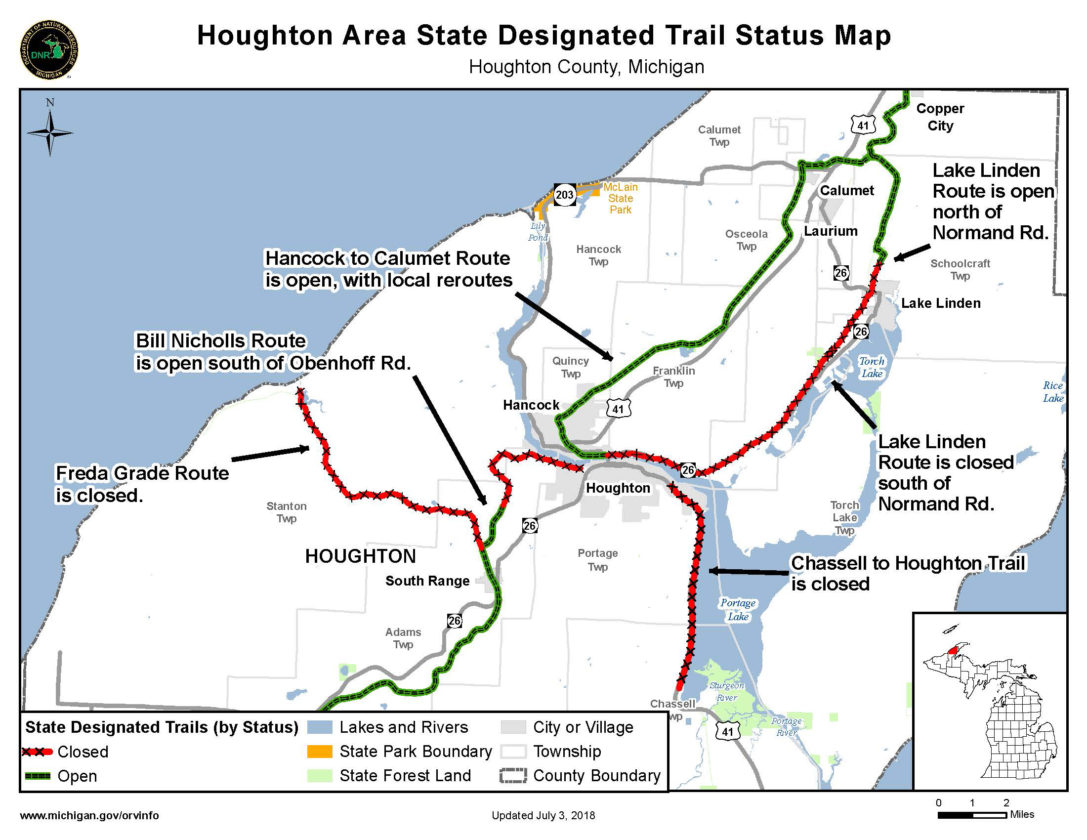 The latest rains came nearly a month after a Father’s Day storm dumped 7 inches of rain on some parts of Houghton County over a nine-hour period. Damage to state-managed facilities in the area was assessed at just under $20 million.

Since that time, the Michigan Department of Natural Resources has been working to restore trails, remove hazards and close areas unsafe to travel.

Initial reports received late Thursday indicated runoff from this week’s rainfall had undermined progress made over some parts of the trail system, while in other areas, repairs made had withstood the latest rainfall event.

“We are currently re-evaluating some of the sites that could have potentially received additional damage due to the recent heavy rainfall,” said Rob Katona, central Upper Peninsula trails specialist with the Michigan Department of Natural Resources. “We are expecting to find some additional damage, primarily to sites that were previously damaged during the June flood event and have not yet been restored.”

Analysts with the Federal Emergency Management Agency are reviewing damage assessments for the area. Gov. Rick Snyder declared parts of the Upper Peninsula, including Houghton County, a disaster area after the June storm and flooding.

DNR officials are awaiting the outcome of the FEMA review to see whether federal funding will be granted to aid the area.

Trail closures remaining in effect include the Freda Grade Route, the Chassell to Houghton Trail and the Lake Linden Route south of Normand Road.

The Hancock to Calumet Route is open with local reroutes. The Bill Nicholls Trail is open south of Obenhoff Road.

“We understand how important ORV and snowmobile trails are to the tourism economy of the Copper Country and we are working to re-open trails as soon as it becomes safe to do so,” said Ron Yesney, DNR Upper Peninsula trails coordinator. “However, we will undoubtedly have some trail closures continuing throughout the winter. The damage in many of these areas is tremendous and will take manpower, money and time to repair.”

Complicating the trail restoration effort is the illegal dumping of household refuse found over recent days along the Lake Linden Route.

“Dumping or littering of any sort on the trails is illegal and law enforcement will be issuing tickets to violators,” Katona said.

Area residents have been instructed to consult their local waste management authority to determine where they can bring refuse and damaged household items to be disposed of properly.

Looking ahead, the DNR has several trails work plans in place:

— Construction crews have completed some restoration and bank stabilization work on the Lake Linden Route west of Hubbell. They continue to work in the Ripley area, which once completed will reopen the trail from Hancock to Dollar Bay.

— Crews are working on stabilizing damaged bridge sites along the Lake Linden Route to prevent further damage from occurring.

— Within the next couple of weeks, crews will begin working on the Bill Nicholls Route, starting between Canal Road and Old Mill Hill Road, to install culverts and repair numerous washouts.

Visitors to F.J. McLain State Park, north of Hancock, will need to reach the park from the north along M-203, because of a washout south of the park.

However, all state parks and state forest campgrounds in the area — including Fort Wilkins Historic State Park in Keweenaw County– remain open and operating.

Initially, the DNR was forced to close about 60 miles of state-managed recreation trails in Houghton County. Some of the trail segments which had less damage were repaired, graded and re-opened.

Elsewhere, some damage and washouts had occurred on the Forest Islands Trail and Route in Menominee County, during the Father’s Day weekend flood event. The damage resulted in closures. However, the DNR has since repaired the damage and that entire trail system is now open.

For the latest status updates on trails and other DNR facilities closures visit Michigan.gov/dnrclosures.