SETH ANDERSON, CO-CREATOR of the “Northstar” saga, stands in the “Northbound” wardrobe closet at The Braumart Theatre in Iron Mountain. The group behind the TV series is making a final fundraising push to complete the saga. (Theresa Proudfit/Daily News photo)

From left are Seth Anderson, co-creator of the “Northstar” saga, NFL analyst and former NFL head coach Steve Mariucci and project co-creator Nathan Anderson. Mariucci has sent a video on behalf of the “Northbound” series that can be viewed on the Northbound website at www.northstarsaga.com. (Promotional photo) 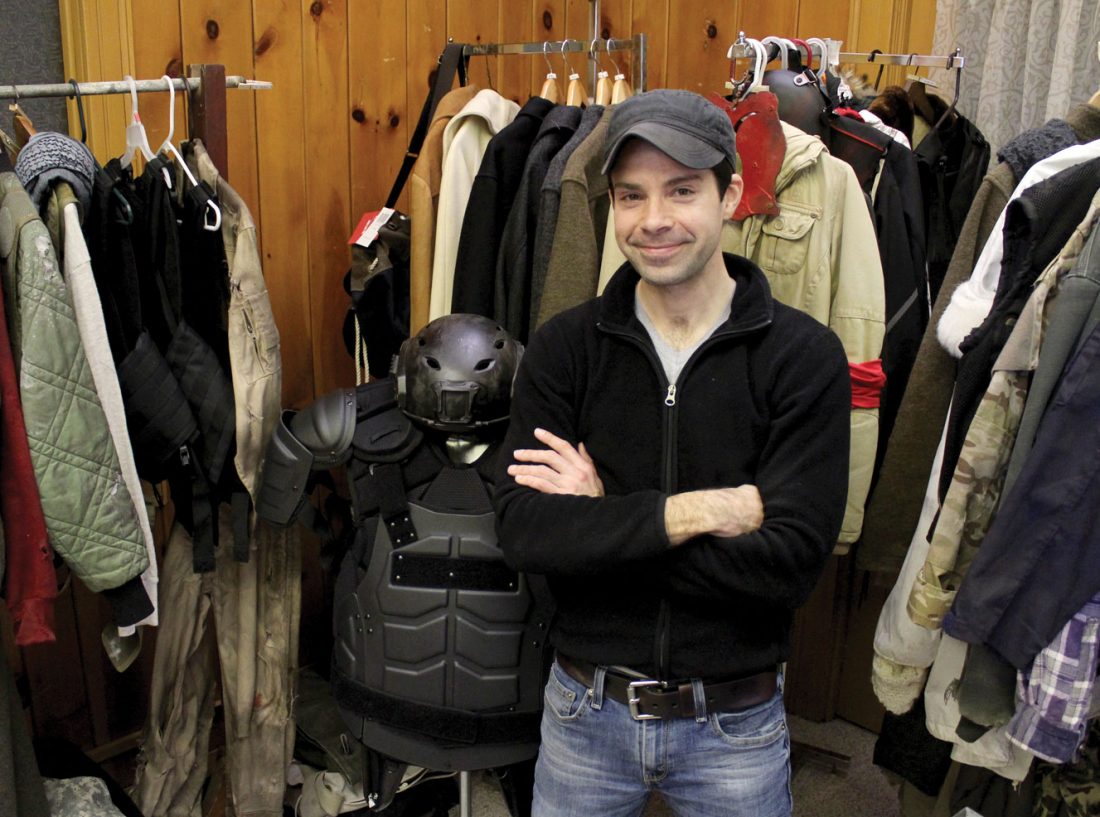 SETH ANDERSON, CO-CREATOR of the “Northstar” saga, stands in the “Northbound” wardrobe closet at The Braumart Theatre in Iron Mountain. The group behind the TV series is making a final fundraising push to complete the saga. (Theresa Proudfit/Daily News photo)

IRON MOUNTAIN – The “Northbound” series family is entering the final days of the “Light It Up” Kickstarter fundraiser — and they’re appealing to the region to help them finish what they started.

“It’s crunch time for us right now,” said Seth Anderson, co-creator of the “Northstar” saga. “We need to go into production this summer so we can release season three at the end of the year.”

The third season is meant to be the final season and will complete the story. “When you watch one, two and three together, it will be a full, movie-like experience. And that is going to lead right into the feature film, ‘Northstar.’ We are on the cusp of the most exciting stuff,” Anderson said. Seasons 1 and 2 of the series are free to view exclusively on Seeka TV, and through their apps on Roku, Apple TV, iOS, Google Play, and Amazon.

Although they managed to raise more than 60% of the pledges needed to hit their overall funding goal, they still need about $7,000 by noon Central time Saturday or “we won’t be able to go forward with our shoot later this summer,” Anderson said.

“This is an all-or-nothing campaign,” he said, adding, “we want to continue the story, we want it to grow.” 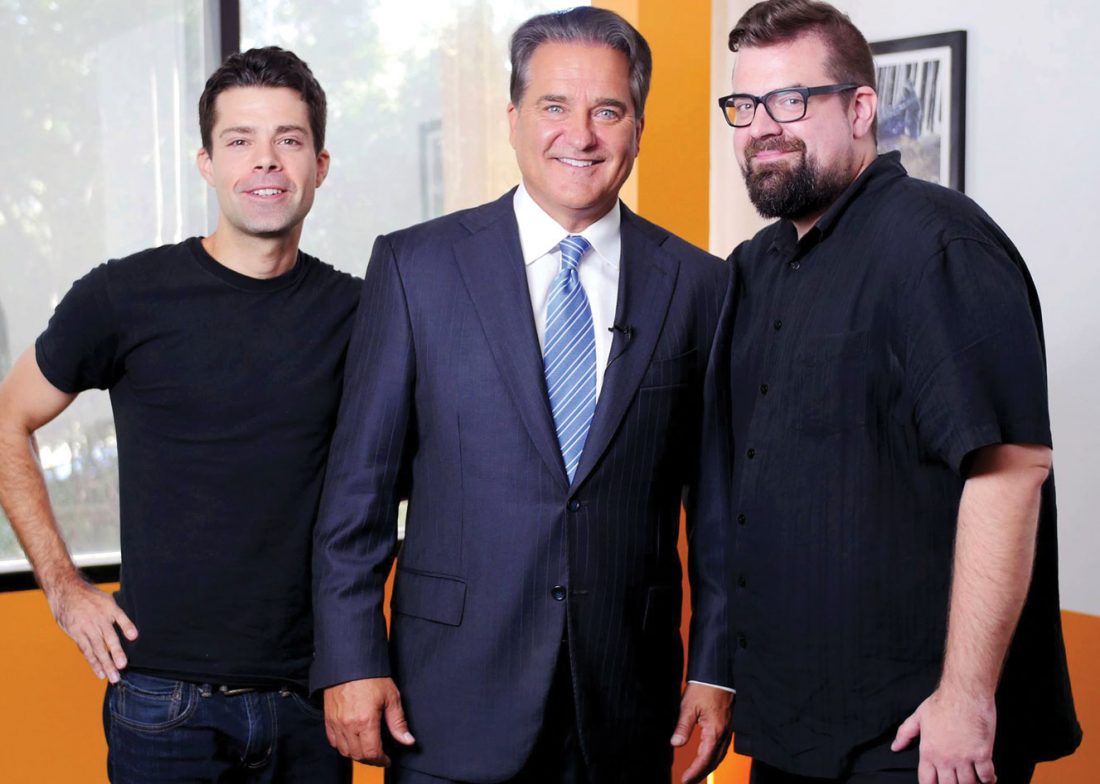 From left are Seth Anderson, co-creator of the "Northstar" saga, NFL analyst and former NFL head coach Steve Mariucci and project co-creator Nathan Anderson. Mariucci has sent a video on behalf of the “Northbound” series that can be viewed on the Northbound website at www.northstarsaga.com. (Promotional photo)

The “Northstar” saga was created by Anderson and his brother, Nathan, both Iron Mountain natives, along with their production company partner, Jason Hagen. The “Northbound” series began in 2014 as a prequel to the planned full-length “Northstar” movie about a group of survivalists who eke out their daily existence after a mysterious cataclysm kills most of North America’s human population in a single day.

Based in the Upper Peninsula, the bulk of the filming has been done in Dickinson County.

Anderson said the region is an essential aspect of the story.

“We are telling a positive story about a community that is facing down a post-apocalyptic event. What we are exploring what a community can do in the face of a huge event where it’s the most dangerous world that you can imagine. Where are the good people? Where is the community that is going to come together?” he said.

“We are getting to the point where professionally it’s looking like T.V. With season three, the huge goal right now is making sure there is no question that we are ready to be on par with a television show or a movie. Part of that is also bringing in some actors,” Anderson said.

Joining the cast this season is Molly Leland of New York, who worked on “Grey’s Anatomy,” “Ozark” and “Law and Order.”

About 25 people from the area are actively involved in the series. “We are putting people to work here. Especially a lot of young people. We are training people to make media right here in the U.P., and we are doing it on a regular basis. We are not going to make this and then go back to Hollywood. Our aim is to stay right here, grow this just as measuredly as we can. Make a feature film and continue staying here,” Anderson said. “Making a feature film out here would be a great economic impact. We would have a source of pride, I want it to be very much a U.P. product. I want it to be something that shows the people here, shows the talent here but also has an audience that is nationwide, worldwide.”

Anderson said the Upper Peninsula is the perfect backdrop for this story. “I went out to L.A. for 13 years, but now I’m back because I think this community has something going. It’s all in line with everything else. The great energy downtown,” he said. “We are great friends with the True North guys that just transformed that building out in Norway. Everything we are doing right now is to take what is great about this area and try to show the best parts of it to the world and say this is a special, unique part of the world that has a lot to offer and creative energy.”

Former NFL head coach turned analyst and famous Iron Mountain native son Steve Mariucci sent a video on behalf of the “Northbound” series that can be viewed on the Northbound website at www.northstarsaga.com.

“We have less than a week to pledge to the 2019 Light it Up Campaign. I’ve known these guys since the beginning of this project, and I can tell you they are going to finish what they start. I’m calling all my fellow Yoopers and anyone watching this video to pitch in any way that you can do their part keep this ‘Northstar’ alive in Upper Michigan,” Mariucci says in the endorsement video.

You can donate at www.northstarsaga.com or by contacting Seth directly at 323-333-5589, or via email here: contact@lullskull.com