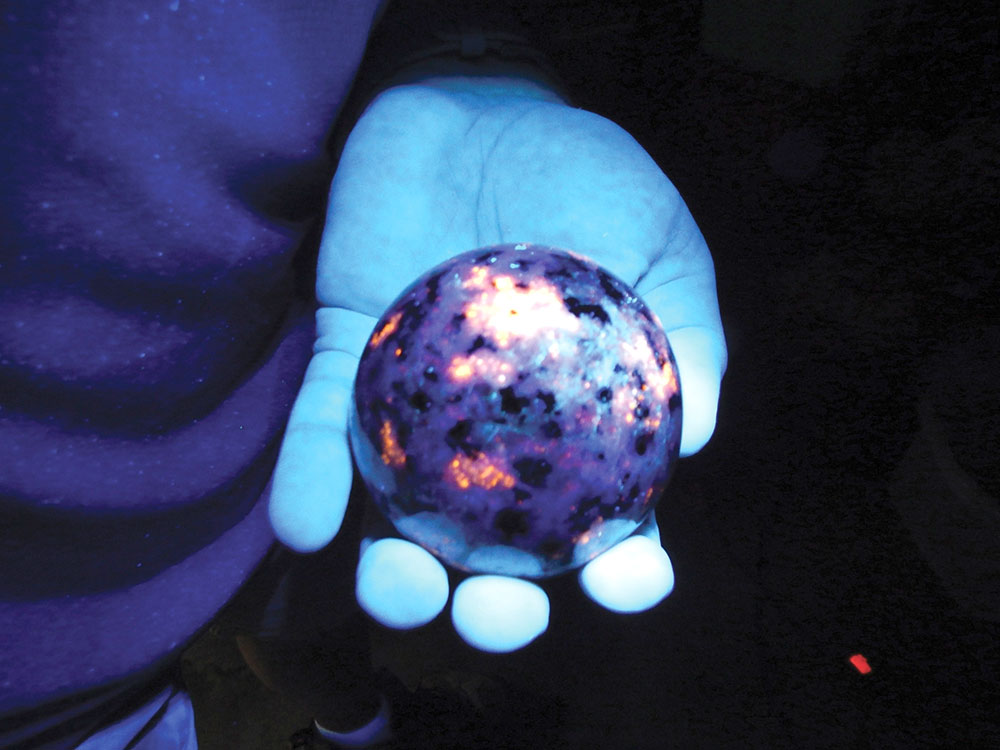 ERIK RINTAMAKI OF Brimley, Mich., holds a sodalite rock gathered from the shore of Lake Superior and illuminated by an ultraviolet light. Rintamaki collects and sells the rocks, which he’s named “yooperlites,” and also leads tours with a UV light where he shows others how to spot them. He is credited with discovering this specific variation of sodalite in June 2017. (Scott Brand/The Evening News via AP)

Erik Rintamaki is credited with finding the sodalite-rich syenite rocks in 2017 on a Lake Superior beach near Brimley. He chose to name the fluorescent rocks “Yooperlites.”

Rintamaki trademarked the term and built a business around the rocks by leading rock-hunting tours with a UV light where he shows others how to spot them.

“He spread the name of this rock as being a Yooperlite, then went ahead and trademarked the word,” Asselin said. “He says no one may use the word in any fashion.”

In a YouTube video posted June 21, Asselin asserted that the trademark is disrespectful to Yoopers, as residents of the Upper Peninsula are affectionately known.

But Rintamaki contends that trademarking the term was simply a business decision.

“If I did not trademark, I would’ve been sued for $360,000 for using a word that I invented,” Rintamaki said. “The technical term for these stones is a syenite rich in fluorescent sodalite. Yooperlite is my brand of fluorescent sodalite from Michigan.”

Anyone can apply for permission to sell the rocks under the Yooperlites name, Rintamaki added.

“If he wanted to use (the name) online he would have to become an authorized vendor, and there is a process for that,” he said. “I am willing to work with anyone.”

In protest, Asselin now seeks to rename these glowing rocks as Lake Shore Emberlites. He even created a now-defunct GoFundMe campaign to trademark the name.