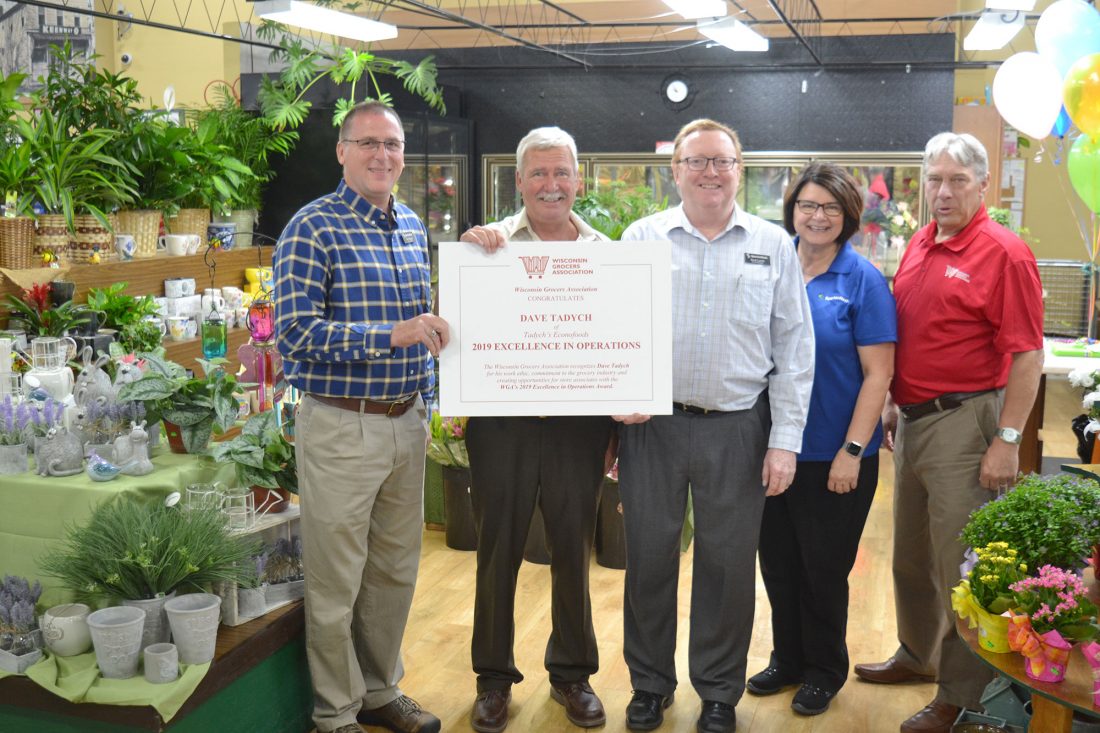 The Wisconsin Grocers Association has recognized Dave Tadych of Tadych’s grocery stores with the Excellence in Operations Award for his contributions to the grocery industry in Wisconsin.

“I never expected it,” Tadych said, adding, “I don’t do this for awards.”

Tadych has been in the grocery business for more than a half-century, starting at his father’s store while in high school in Manitowoc, Wis. As an assistant manager in 1974, Tadych joined his brother, Jim, at T&C Market in Shawano, Wis.

Dave Tadych moved to Sturgeon Bay, Wis., in 1981 to manage Tadych’s warehouse concept store, Sav-a Buck. In 1985, as operations manager, he played a key role as the company expanded into Michigan with the opening of Jim Tadych’s first Econofoods in Iron Mountain. The company now owns six locations, the last added in Clintonville in 2001.

“It’s customer service,” Tadych said of their success. “It’s the old-school way … to help with the experience. We treat our customers like family.”

Locally owned and operated, the company also is committed to raising funds for local non-profit organizations. In fact, the company’s website has a “Tadych’s Community Care Program” brochure that shares ways to partner with Tadych’s to raise funds for organizations.

From helping to organize events to benefit the Boys and Girls Club and United Way, to participating in local scholarship and athletic programs and the “We Share” Program for area food banks, Tadych had a hand in all of it.

over the years. Through extensive training programs and personal mentoring, Tadych’s have built a strong team that will carry on their commitment to their communities and assure the internal growth and careers of their associates.

Dave Tadych and the company also have acknowledged the importance of good business relationships with their vendors. For more than 35 years, the company has given back to those in the vendor community through the annual Tadych’s Econofoods Golf Classic — also known as the “Greatest Golf Outing in the World”. This event is their way of saying thank you to everyone that made the community events a success over the years.

Tadych was nominated by Greg Cross of SpartanNash, Tadych’s supplier.

This is the 16th year the association has presented the Excellence in Operations Award.

“The award is intended to recognize store owners, managers and store directors in the grocery industry who are on the front lines every day and instrumental in the success of their stores,” said Brandon Scholz, WGA president and CEO.

A formal award will be presented to Dave Tadych on Oct. 2 at the Grocer’s Innovation Expo at the Kalahari Resort in Wisconsin Dells.