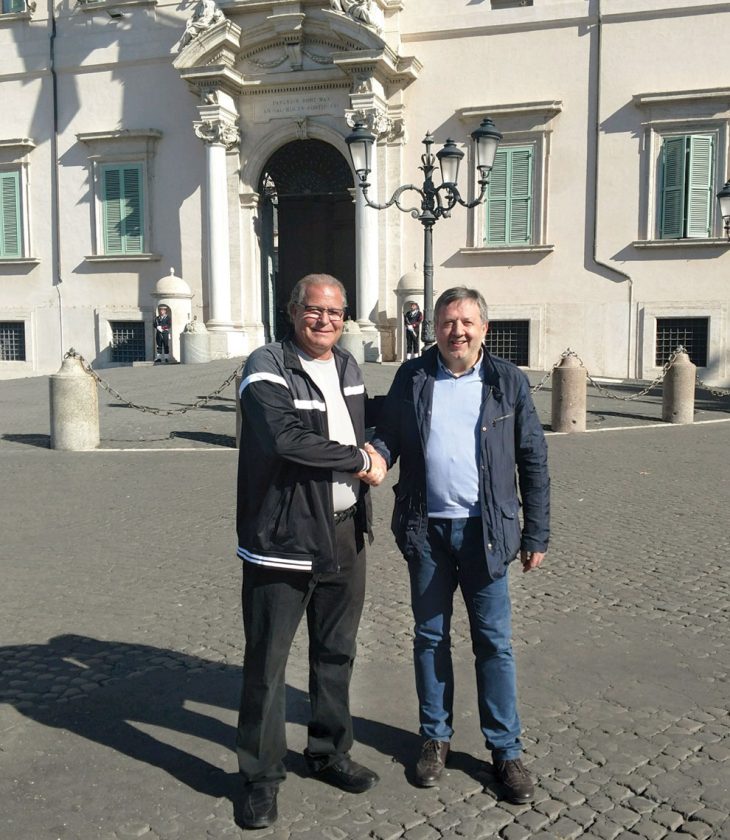 Former Sassoferrato mayor Ugo Pesciarelli and his wife, Paola, along with friends Nazarreno and Renate Azzerri, were expected to arrive today at Ford Airport, with an Italian Fest appearance Saturday as part of the itinerary.

Al and Paula Santoni, Kelly and Dan Bianco and Lisa Carubini will serve as tour guides for the group through their stay.

The group will tour the city Saturday morning, then have lunch at Italian Fest before receiving a key to the city at 1:30 p.m. from Iron Mountain Mayor Dale Alessandrini.

“They are looking forward to Italian Fest. I hope it meets their expectations,” Al Santoni said.

During their stay in the area, the couples will dine at Romagnoli’s, Carlos Cantina and 51st State Brewery, as well as lunch at B’s Country Café and Bimbo’s. The Santonis also have invited the foursome over for a home-cooked meal.

Church services at Immaculate Conception Church on Sunday will be followed by an afternoon boat ride on Spread Eagle lakes. Tours of Dickinson Homes, Boss Snowplow and Systems Control and a stop at Iron Mountain City Hall will take place throughout the week.

The visit also will include a trip to Marquette to see Lake Superior, Escanaba to see Lake Michigan and possibly going to Munising and the Keweenaw.

“They would like to see the Great Lakes. I don’t think they know how big the Great Lakes are. The biggest lake in Italy is 40 miles long,” Santoni said.

According to Santoni many residents in the region have relatives from Iron Mountain’s sister city and that part of Italy. Local families with roots in the Sassoferrato area include Olivanti, Crispignia, Cavalieri, Cheli, Santi, Carubini, Carobine, Fiorani, Rossi, Tamidi, Romagnoli, Simone, Marconi, Santoni, Mondavi, Andreini and Loia.

“There are a lot of people in our community have relatives that came from Sassoferrato and surrounding areas,” Santoni said.

Both Iron Mountain and Sassoferrato adopted sister city resolutions in late 2016 and city signs now are in place to further promote the tie. A sister city relationship is a long-term cooperative arrangement through which cultural, educational, business, and technical exchanges take place.

Sister Cities International was created by President Dwight Eisenhower’s 1956 White House summit on citizen diplomacy. The mission is to be a champion for peace and prosperity by fostering bonds between people from different communities around the world to “promote peace through mutual respect, understanding, and cooperation – one individual, one community at a time.”

Sassoferrato, which roughly translates to “mountain of iron,” hosts natural and historic attractions and links to ancient civilization in Italy. Sassoferrato’s population is about 7,200, roughly a few hundred less than Iron Mountain’s. Like its sister city, its economy has moved away from mining toward manufacturing, technology, and tourism.