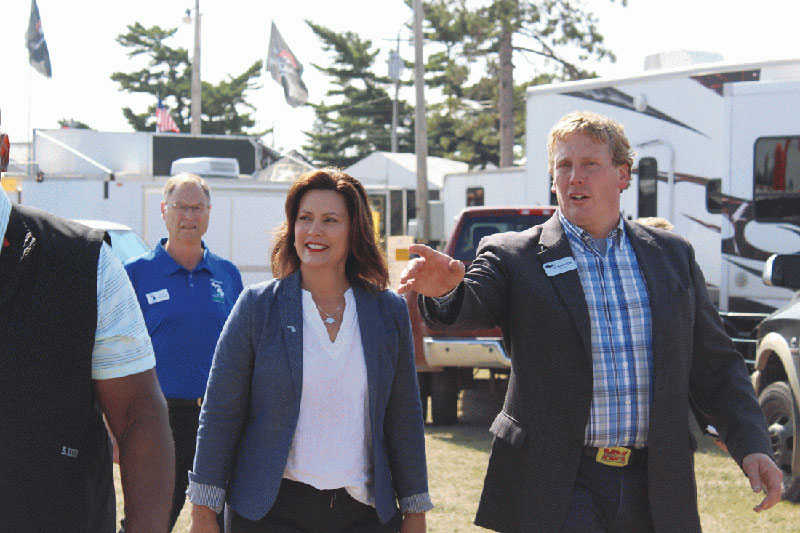 During Thursday’s lunch, she spoke about her efforts since taking office to address issues facing the state, including water and infrastructure.

Questions from audience members ranged from if she had another way to fund fixing the roads in Michigan without the 45 cent gas tax to the status of Enbridge’s Line 5 since talks have stalled.

Bay College President Laura Coleman moderated the question portion of the lunch. One of the questions was if Whitmer had a back-up plan to her 45 cent gas

tax proposal in the case it falls through.

“Well I think that should be posed to the Legislature, to be honest. I put a plan on the table, I stand by the plan, I challenge anyone to come up with one that actually addresses the issues we’re confronting as a state that does it better,” Whitmer said.

She added her proposed 45 cent gas tax would be dedicated to funding infrastructure in the state, and infrastructure only. She said if there is an alternative, then she would be open to explore it, but as of right now this is her solution to the “$2.5 billion” infrastructure problem in Michigan.

Under Whitmer’s proposal, existing road and bridge revenue — which primarily comes from fuel taxes such as the 26-cents-a-gallon gasoline tax and yearly vehicle registration fees — would stay in the current formula: 39 cents of each dollar to the state Department of Transportation, 39 cents to county road commissions and nearly 22 cents to cities and villages.

The new money collected from a 45-cents-a-gallon increase would be split as follows, based as a share of line miles: 47 percent to interstates and freeways; 30 percent to the most heavily traveled non-freeways; 7 percent to highly traveled roads that are mostly locally owned; 7 percent to roads that are almost completely under local control and connect to neighborhoods and the local street network; 4 percent to local bridges; 3 percent for transit, rail and mobility services; and 2 percent for uniquely significant rural roads that serve major agricultural or manufacturing facilities.

In an earlier interview with the Daily Press, Whitmer said there is an inaccurate assumption of how the 45 cent gas tax distribution favors urban areas more.

She said it will take all of us to fix the roads and all of us will benefit.

At the lunch, Whitmer was asked about the status of Line 5 since talks with Enbridge have stalled with Enbridge suing Whitmer over the deal made with the previous governor.

“Even though Enbridge is suing me right now, we’re working with them to ensure that they can get the data they need if we move forward with the tunnel. My goal as governor is two fold — one to make sure that people in the Upper Peninsula and the northern part of the Lower Peninsula have access to affordable energy, and two to protect the Great Lakes,” she said.

Whitmer said Line 5 is a risk that would be catastrophic to Michigan’s economy, agriculture, tourism, and drinking water.

In an earlier interview with the Daily Press, Whitmer said despite the lawsuit she is optimistic in continuing negotiations with Enbridge. She added one way or another, with a tunnel or not, the pipeline, which is 15-years overdue, is coming out.

One of the main concerns in the U.P. with shutting down the pipeline under the Straits of Mackinac is how it will impact the U.P.

Whitmer said she created the U.P. Energy Task Force to assess and find other methods to ensure the U.P. has access to affordable energy.

When asked during the interview with the Daily Press about the lead pipe regulations put in place by the Michigan Department of Environment, Great Lakes, and Energy that has taken a financial toll on local municipalities, Whitmer said her gas tax could indirectly allow the state to help with the costs.

“So that’s a part of when we fix the roads at the pump, we can actually get general fund dollars back into the general fund and replace lead infrastructure and help communities do that so the burden isn’t just put onto the rate payer through increases at the local level,” she said.