Worthy of admiration, turkey vultures have a role 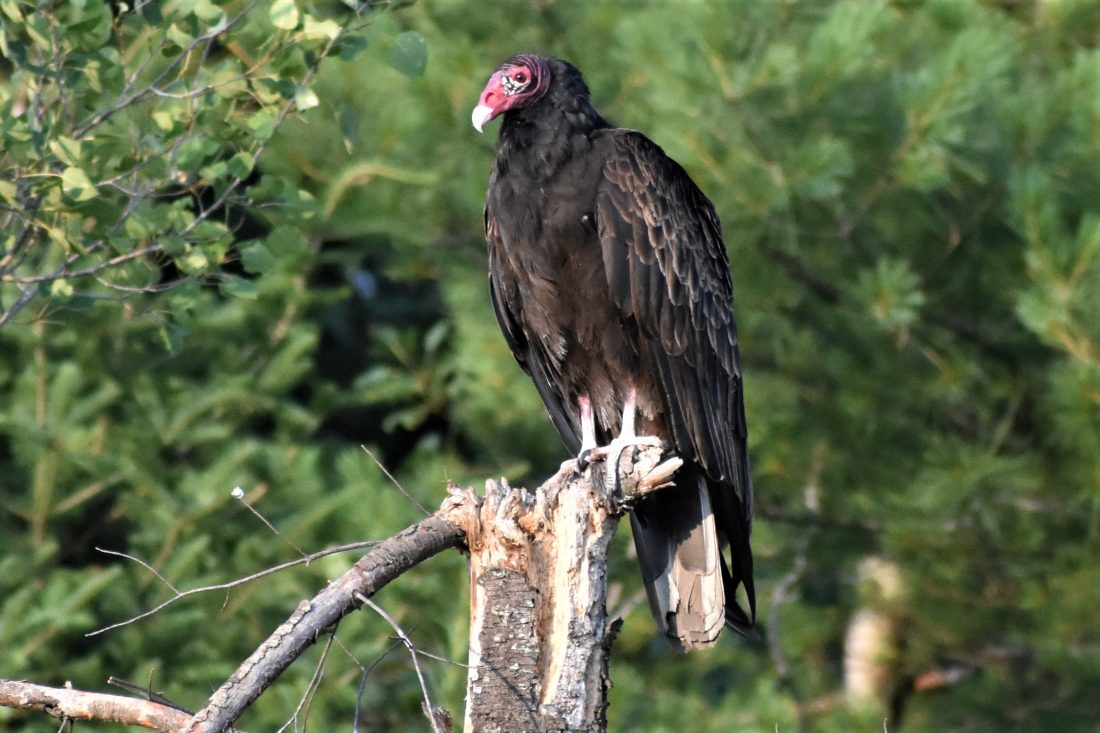 A turkey vulture perches in northern Dickinson County. The primary threat to the species in Michigan and Wisconsin is consuming lead shot in hunted carcasses. (Betsy Bloom/Daily News photo)

A turkey vulture perches in northern Dickinson County. The primary threat to the species in Michigan and Wisconsin is consuming lead shot in hunted carcasses. (Betsy Bloom/Daily News photo)

A black-billed cuckoo jolted by a vehicle collision last month is back in the wild. (Betsy Bloom/Daily News photo)

A juvenile great blue heron imperiled by a stick in its mouth is expected to fully recover. (Phyllis Carlson photo)

It’s time to acknowledge the beauty of the turkey vulture.

Sure, on the surface the naked head and carrion-eating habits of the vulture might trigger revulsion. But the design of this bird for its purpose is worthy of admiration. After all, it does a job none of us really wants to do but very much needs to be done.

Vultures have the ability to help break down carcasses, feeding on meat that would sicken a fair number of other animals. Humans have to be cautious about the conditions under which their meat is prepared and stored, to avoid it becoming tainted with bacteria that starts the process of decomposition. Vultures, however, can consume carrion that has been dead and decaying for days, with no ill effects.

How is this possible? Brian Weeks, a conservation ornithologist and evolutionary ecologist at the University of Michigan, provided an explanation.

“Vultures deal with this in a couple of ways,” Weeks said in an emailed response. “The first is that their stomachs are extremely acidic; this serves to kill lots of bacteria that might otherwise cause them to be sick. The second is that they appear to have evolved to have an immune system that is capable of dealing with many of the pathogenic bacteria that are found in rotting meat; they even have some of these bacteria as a part of their natural gut microbiota. In other words, the bacteria that would make a human sick is either killed by the immune system of a vulture, or can be tolerated by the vulture.” 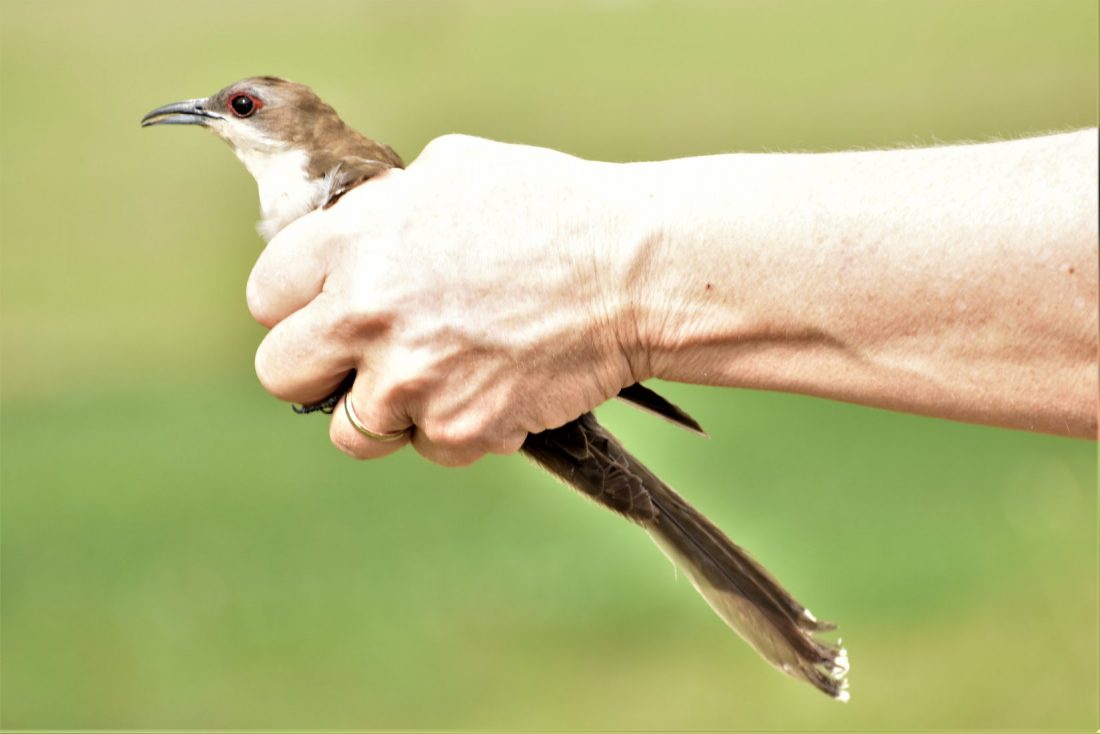 A black-billed cuckoo jolted by a vehicle collision last month is back in the wild. (Betsy Bloom/Daily News photo)

That’s not the only adaptation vultures have evolved to thrive as a scavenger.

That naked head means it can plunge into a carcass without getting too much mess on its feathers, Weeks said. That teetering, V-winged flight — perhaps the quickest way to identify a vulture in the air when seen at a distance — not only is efficient, with little flapping needed, but lets the vulture cruise low to the ground, he said.

Which highlights another key asset: Vultures have a great nose for odors. “It’s unusual for a bird to have a highly developed sense of smell,” Weeks said, “and lets them find freshly dead carrion to eat.”

Even a seemingly slovenly habit — turkey vultures are known to defecate on their legs — might be to kill off any bacteria picked up from walking on dead bodies, although it is thought to be a cooling mechanism as well.

Vultures also regularly spread their wings while perched to “sun,” primarily to warm up but also exposing feathers to sunlight, baking off bacteria. 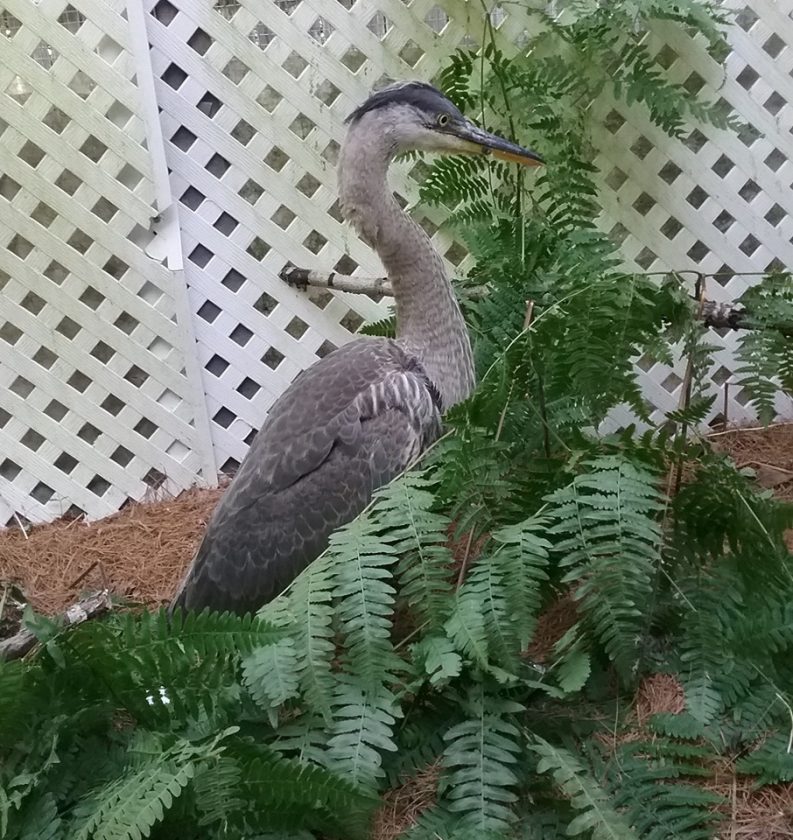 A juvenile great blue heron imperiled by a stick in its mouth is expected to fully recover. (Phyllis Carlson photo)

It adds up to animal we should appreciate, not sneer at, for its habits and appearance. “These birds provide a really valuable service to humans — cleaning up dead animals that would otherwise accumulate, which would be both nasty and potentially a health hazard,” Weeks pointed out.

Turkey vultures are the region’s only representative of the New World vulture family, which in North America includes the more southernly black vulture and the endangered California condor.

They are not related to the vultures of Africa, Europe and Asia, which are more closely tied to raptor species such as eagles. The New World birds instead are thought to be aligned with storks — a look at the wrinkled bare head of a wood stork gives some hint of that relationship.

While turkey vultures have struggled in the past — humans would shoot or trap them on the mistaken belief they could spread disease, or the birds would feed on carcasses poisoned to eradicate livestock predators like coyotes — they are thought to have increased in number in the past few decades, according to the Cornell Lab of Ornithology’s All About Birds website, www.allaboutbirds.org. They even appear to be expanding their range north, possibly as a result of climate change.

They do still face some threats in Michigan and Wisconsin, primarily from consuming lead shot in hunted carcasses, Weeks said. But they are in far better shape as a species than the California condor, or several of the Old World vultures.

An update on the black-billed cuckoo that flew into the side of my SUV on July 16 while on M-69 — after a week of scarfing down waxworms in captivity, the bird was released July 25 by wildlife rehabilitator Phyllis Carlson in the Quinnesec cemetery near her home. We discussed returning it to the same place where it had been found but worried it would be tough to recover in woodlands if it was unable to fly well. Happy to report it flew just fine. Unhappy to report my camera balked in getting shots of the actual release.

A couple of notes in wrapping up this little episode: First, thanks to Carlson and Diane Allbaugh of Kingsford for their great care and assistance. Second, if you can accommodate it, stash a pet carrier and leather gloves in the trunk or back of your vehicle, just in case. Had this been a bird of prey, I maybe could have dropped a blanket over it but it would have been much tougher than the cuckoo. Third, learn now who might be the closest rehabilitator in your area. I already knew Carlson and that probably made the difference in how this all played out.

And finally, if you can make a contribution to help wildlife rehabilitation in your area, I’d highly recommend it. Such care is not cheap, so every little bit helps.

Carlson on Friday posted her most recent rescue, a juvenile great blue heron that had been lingering on the beach of Big Pine Resort at Hamilton Lakes, not moving away even when people got close.

She and her husband managed to capture it with net, finding it was “terribly thin,” Carlson reported. An examination at her home revealed the poor bird had a 4-inch stick embedded in the top of its mouth, blocking its throat and preventing the heron from swallowing anything.

“Terri Dactyl” has since been rehydrated through a tube carefully threaded down its long neck, before being offered frozen mice plus minnows supplied by Northwoods Wilderness Outfitters and Whispering Pines Outpost, she said.

“It will probably take several weeks for Terri D to be back up to weight,” Carlson wrote, “but I expect a full recovery!”