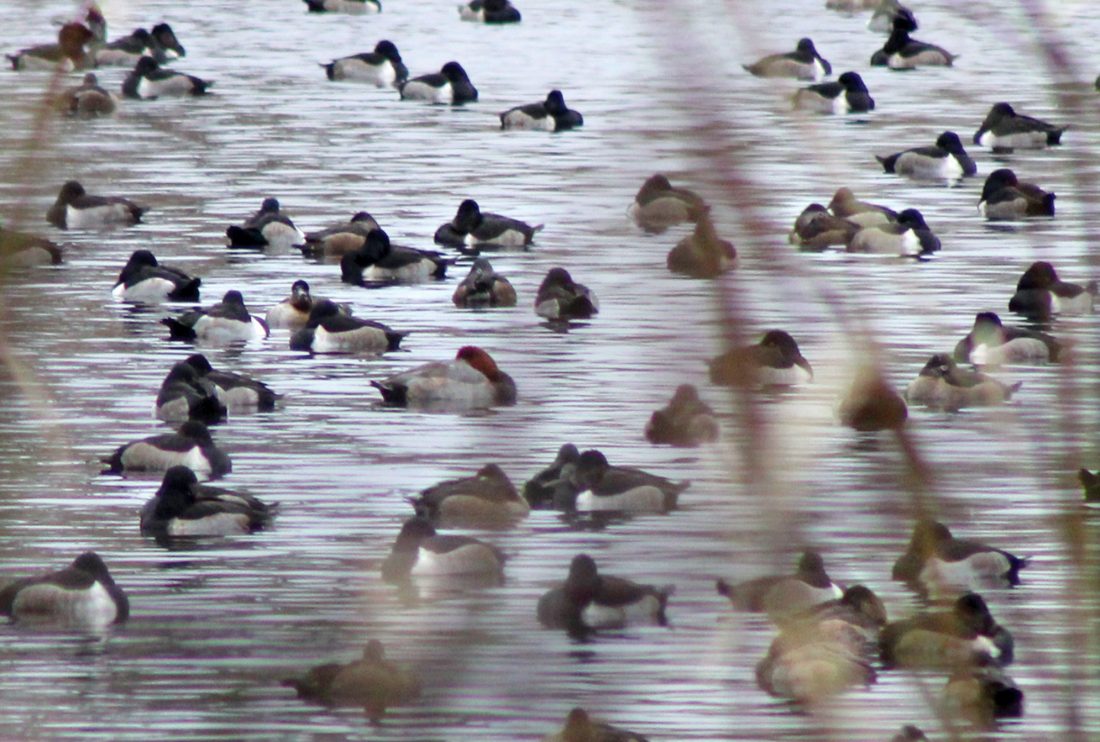 A lone redhead drake at center loafs with what appears to be mostly ring-necked ducks at Crystal Lake in Iron Mountain. While most of these seemed to be settling in for a nap, the number of waterfowl coming through the region should pick up pace now that conditions are turning colder, migration experts said. The lake had Canada geese, mallard, wood ducks and coots as well, along with what appeared to be a few scaup. (Theresa Proudfit/Daily News photo)

Readers regularly send photos and stories about wildlife they observe in the region, either at their homes or while enjoying the outdoors.

It’s great to get these submissions — beyond providing material for the column, it’s a glimpse of the variety of activity out there, much of which otherwise would go unseen and unnoticed.

Thanks to the public, this space has been able to share a white wild turkey with black speckles like a snowy owl, a flame-colored western tanager hundreds of miles from where it might be expected, and the mystery of how a northern caught while ice fishing in mid-winter managed to have a recently caught frog in its belly.

But an email from Ed Laarman of Niagara, Wis., might be the most unusual story sent my way so far. I’ll let him tell the tale:

“On Wednesday, September 18, I was fishing with a friend on the Menominee River near the channel into Cowboy Lake. We were near the south bank, which is wooded and slopes steeply into a forested area.

“We heard screeching in the woods above us, and I realized it was a blue jay. The screeching sound came closer, and a hawk flew down to the river bank with a squawking jay in its talons. Then to my amazement, the hawk plunged the jay under water until it had drowned. Spotting us, the hawk left its prey on the riverbank for a few minutes, but then retrieved it, went a few feet up the bank, and proceeded to eat the blue jay. I didn’t know that raptors knew how to drown their prey!”

Nor did I. Laarman included an admittedly fuzzy photo of the bird, guessing it was a Cooper’s hawk but wondering if an expert could help shed some more light on this behavior. Good suggestion.

Ryan Brady, Natural Heritage Conservation biologist for the Wisconsin Department of Natural Resources office in Ashland, surprised me by acknowledging he’d never heard of a Cooper’s hawk drowning its prey. But a quick search online turned up several mentions in academic papers.

Both I and Laarman later found this on the Cornell Lab of Ornithology’s All About Birds website, www.allaboutbirds.org: “A Cooper’s hawk captures a bird with its feet and kills it by repeated squeezing. Falcons tend to kill their prey by biting it, but Cooper’s hawks hold their catch away from the body until it dies. They’ve even been known to drown their prey, holding a bird underwater until it stopped moving.”

This, too, was on the website for the Hawk Mountain Sanctuary in Kempton, Pennsylvania, at www.hawkmountain.org: “Individuals sometimes submerse and drown their prey in lakes and ponds.”

Yet both Brady and another bird of prey expert in Wisconsin, Gene Jacobs of Raptor Services LLC in Stevens Point, had never observed what Laarman got to witness, despite years of being out in the field. Nor had Robert Rosenfield of the University of Wisconsin-Stevens Point, thought to be among the most knowledgeable people on Cooper’s hawks.

Both Rosenfield and Brady had another wrinkle to the story: They leaned toward the bird being a sharp-shinned hawk rather than a Cooper’s, immature given the yellow eye and browner color. The two species are related and very similar, Brady said, but the sharp-shinned is smaller and has some differences to the breast spotting and beak size compared with its head. He speculated it was a female, which might account for the larger size than what might be expected for a sharp-shinned.

Brady encouraged anyone who sees an unusual bird or behavior to do just what Laarman did, try to contact a birding group or expert in their state to determine whether it worth recording as noteworthy.

Brady also is responsible for putting out the DNR’s weekly Statewide Birding Report for Wisconsin during migration seasons. He noted that most of the land birds that migrate have departed, but the recent cold turn probably will drive “more waterbirds, and several days of good raptor migration, especially on the west-northwest winds of Saturday and Tuesday.”

With snow now regularly in the forecast and temperatures sticking in the 30s or lower, the backyard bird feeders should again become popular for the birds that do stick around.

Brady was kind enough to post these 10 tips from the Wisconsin DNR on setting up feeders at a time when higher energy demands and fewer natural food can draw in the maximum variety of feathered visitors:

— The single best seed to provide is black oil sunflower, which has high fat content and attracts the most species.

— Also offer nyjer or thistle seeds for finches, white millet for sparrows, doves, and other ground-feeding species; plus both suet and peanut chunks for woodpeckers, chickadees nuthatches.

— Deter squirrels with cone- or dome-shaped baffles above hanging feeders or below pole-mounted feeders.

— Place feeders closer than 3 feet or farther than 30 feet from the home to avoid the deadliest window collision zone.

— Minimize disease by cleaning feeders at least once every two weeks using soapy water and a 10% bleach solution.

— Provide cover such as brush piles or dense shrubs for roosting and escape from predators.

— If another source is not nearby, offer water to attract a wider variety of species, using a heating element when temperatures dip below freezing.

— “Birdscape” properties with native plants such as fruit-bearing shrubs and evergreen trees. For more guidance, check out the birdscaping resources on the Wisconsin Stopover Initiative website, www.wisconsinbirds.org/migratory/.

— Contribute to bird science and management by reporting birds seen at feeders. The Great Backyard Bird Count every February is an easy, fun way to get started: for at least 15 minutes on one or more days participants simply tally the numbers and kinds of birds you see. Project Feederwatch spans the entire winter.