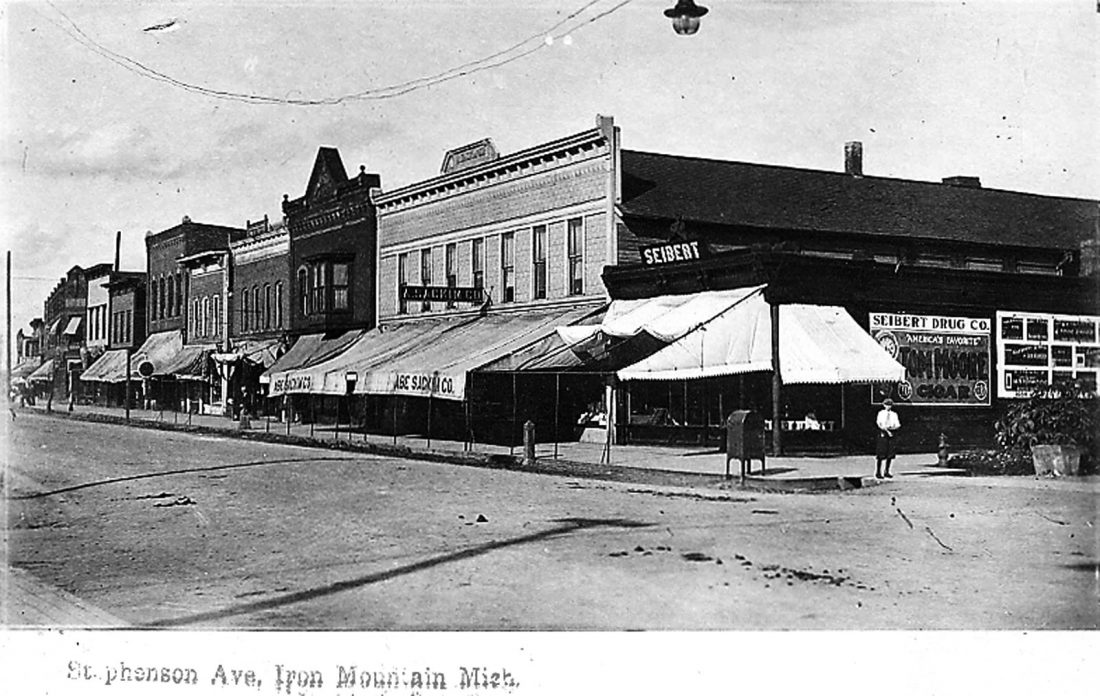 This postcard view from no later than 1920 shows the east side of the 300 block of South Stephenson Avenue, looking north. Seibert’s Drug Store, with awnings lowered, was located on the northeast corner of South Stephenson Avenue and East Hughitt Street. The Abe Sackim Company Store, the largest department store in Iron Mountain at the time, was located north of Seibert’s Drug Store. North of the Abe Sackim Company Store was the Montgomery Block. (William J. Cummings)

History of 321: Built in 1887 at 321 South Stephenson Ave by Clinton W. Montgomery, a brick manufacturer, the Montgomery Block was one of Iron Mountain’s early business blocks. In April 1889, Montgomery purchased the Adams House, a hotel belonging to the Jacques Brothers, for $4,400. This frame property adjoined his brick building, and the editor of The Menominee Range hoped Montgomery would remove the wooden structure and extend his “handsome brick block.”

John T. Spencer, a “dealer in fruits and vegetables, provisions, confectionery and notions,” operated two stores in 1892-1894, one in the Montgomery Block and the other at 118 West B St., where he also lived.

An article in the May 7, 1891 edition of Iron Mountain’s The Menominee Range made mention of many business moves, including the Montgomery building, as follows:

“THE draymen about town had plenty of work on Friday last and all day long great loads of furniture, store fixtures, etc., were passing to and fro on the streets. May 1 is considered all over the country to be a general moving day and it seems to be an established fact that more people move on that day than any other day in the whole year. In this city there were more removals than usual and many businessmen are comfortably ensconced in their new quarters while others are making preparations to become settled.

“The Montgomery building which was formerly occupied by the saloon of J.H. Williams, will be taken up in a few days by the Bee Hive store. The building is being remodeled this week and when completed will make one of the finest stores in town, the old front having been torn out and substituted by one of plate glass. Williams’ saloon now occupies the building recently erected by Sol. Noble on Ludington street.

“Edward St. Arnauld has vacated the building he occupied on Stephenson avenue and has removed his saloon to the Gingras & Trepanier building on Hughitt street. J.R. Johnston will occupy the vacated room with his tailor shop and gents’ furnishing store. The room is being newly refitted and papered and will make a good stand for Mr. Johnston’s business.

“The City Shoe Store has been removed from Brown street to a stand on Stephenson avenue where Joseph Parry and A. Lieberthal & Co. were stationed. This will now be an exclusive boot and shoe store and will be managed by Mr. Parry and Fred Hunting. The building vacated by them on Brown street will be occupied by A. Uddenberg as a drug store.

“A. Leiberthal & Co. will remove their store to the building now occupied by the Bee Hive, but later in the year they will remove to the store now taken up by Sam Rusky, who in turn will go to the Bee Hive’s present location.”

“John J. Cole has moved his stock of goods to the Montgomery block on Stephenson avenue.”

In the June 3, 1897, edition of the Iron Mountain Press, under the headline “Hassel Embarrassed”, the following article appeared:

“The dry goods establishment of Ellis Hassel, in the Montgomery block, was closed on a chattel mortgage held by Lauerman Bros., of Marinette, last Monday. The mortgage is for $1,874. Mr. Hassel came to the city about a year ago and engaged in business in a small way in the Catlin building on Brown street, moving about four months ago to Stephenson avenue. He was enterprising and was thought to be doing a successful business. His failure is a surprise to his most intimate friends. Mr. Hassel informs his intimates that he intends going to Europe as soon as his affairs are settled.”

Another article in the June 3, 1897, edition of the Iron Mountain Press, under the headline “A New Store”, stated:

“Dan H. Lieberthal has decided to return to Iron Mountain and engage in business. He has leased the Montgomery brick block for a term of years, and the building is now in the hands of carpenters for an extensive refitting. Mr. Lieberthal expects to be in shape to receive customers on Saturday. Since leaving Iron Mountain he has been engaged in business in Dawson, Minn., and Ironwood.”

A third article involving the Montgomery building appeared in the same edition of the Iron Mountain Press, under the headline “Will Rebuild Their Store”, as follows:

“Hancock & Sundstrom, the hardware merchants, are engaged this week in moving their stock of goods to the Montgomery block. It is the intention of the company to rebuild the store they have occupied for so many years. A stone foundation and basement will be put under the store and other improvements made that will add much to the appearance of the corner.”

In the Oct. 28, 1897 edition of the Iron Mountain Press, the following article appeared under the headline “Sundstrom Moves”:

“A.J. Sundstrom, the hardware merchant, who has occupied the Cameron building, N. Stephenson avenue, ever since he engaged in business here, is moving this week to the Montgomery block, opposite the Chicago & North-Western depot. This is an excellent stand, convenient to all parts of the city, and the removal will undoubtedly result in an increase in business. Mr. Sundstrom informs The Press that he intends adding largely to his stock of goods and will receive in a few days a splendid line of china, crockery and glassware, which will be displayed on the second floor. He will make a specialty of this line and invites the public to inspect his stock.”

The two Montgomery blocks, the brick block and the frame block, both burned on Tuesday morning, Jan. 11, 1898. At the time of the fire, the Montgomery blocks were occupied by D.H. Lieberthal, clothier; A.J. Sundstrom, hardware; E. Mattson, confectionery; and C. Corneilson, baker.

The Iron Mountain Press termed the fire “the most destructive fire in the history of Iron Mountain, resulting in the almost total destruction of the Montgomery brick and frame blocks and the damaging of the Allen building.” The loss totaled over $33,000. The Allen Building had A.E. Smith, saloonkeeper, as a tenant.

“Shortly after one o’clock Policeman Bray discovered fire in the basement of the brick building occupied by Mr. Montgomery as an undertaking establishment. An alarm was at once turned in and the company responded with their usual promptness. Chief Harvey, with the assistance of his men and many volunteers, soon had nine streams of water pouring torrents of water upon and into the buildings but owing to the difficulty of locating the flames it was not extinguished until six o’clock. In the meantime nearly 500,000 gallons of water had been consumed.”

Chief Harvey pronounced the fire to have been one of the most vicious he ever had to fight, and “had it not been for the efficiency of our fire department and water works system the business portion of our city would have been wiped out of existence.”

Although a considerable amount of Sundstrom’s, Lieberthal’s and Mattson’s stock was saved, it was in such a badly damaged condition that they would be lucky to realize hardly 25 cents on the dollar, thus suffering almost a total loss.

How the fire originated remained a mystery, but talk of incendiarism (sic) was “mere guess work.”

As a result of this fire, the ordinance regulating fire limits was amended. Only solid brick or stone buildings were to be erected in the business district, and a fire warden was appointed. The city council was petitioned to lay water mains along the surface of Stephenson Avenue across the Chapin Pit to give increased efficiency.

The following item also appeared in the Jan. 13, 1898, edition of the Iron Mountain Press regarding C.W. Montgomery’s plans to rebuild:

“C.W. Montgomery is arranging to erect a fine business block on the lot occupied by the partially destroyed frame building. A merchant has agreed to lease the same for a term of five years.”

In the June 1, 1898 edition of Iron Mountain’s The Daily Tribune in the “CITY NEWS ITEMS” column, the following appeared:

“A. Kramer & Co. opened a new liquor store in the Montgomery block this noon. It is a gorgeously furnished place with a bar in a circle in the center of the large room. The firm is composed of Abe, Ben and Meyer Kramer.”

In the ‘CITY NEWS ITEMS” column of the June 9, 1898 edition of The Daily Tribune the following announcement appeared:

“The Montgomery building is being made safe by tearing it down.”

An article in the Aug. 25, 1898 edition of the Iron Mountain Press under the headline “TWO MORE ARE DEAD: Johnson and Symons of Co. E” the following information appeared:

“Last Monday morning the editor of The Press received a telegram from the Detroit Evening News containing the sad information that August L. Johnson, a member of Company E, had died in the military hospital at Santiago, Cuba, of typhoid fever. His two brothers, Oscar and Charles, employed at the London store, were at once informed of their bereavement, and they communicated the news to the afflicted parents who reside on Kent street in the Chapin location. In addition to the above named relatives the deceased also leaves two sisters who reside at home. August L. Johnson was a splendid type of manhood and his death in foreign lands while serving his adopted country is mourned by many friends.

“He was about twenty-five years of age, and had been a member of Company E almost since its organization. Last summer, for several months, he conducted a bicycle repair shop in the Montgomery building.”

In 1902-1903 A.L. Kramer & Company (Abe Kramer) ran a saloon at this location. Archie Lanouette was the proprietor of a restaurant at this address in 1907-1908, and also resided here with his wife Souvrine Lanouette. There was no listing for this address in 1913 or 1925.

At 8 a.m. on the morning of Friday, Nov. 29, 1929, the J.J. Newberry Store, the company’s only “chain-store” in the Upper Peninsula, opened in the quarters formerly occupied by the Dillon & Laughlin United Cigar Store (Charles M. Dillon and James A. Laughlin) at 321 South Stephenson Ave. The resident manager was R. Baker. The store had been “remodeled throughout, with all new fixtures and equipment,” according to the article appearing in the Nov. 27, 1929, edition of the Iron Mountain News. Although classified as a 5-25-cent store, prices in the J.J. Newberry Store ranged from five cents to one dollar and covered everything from hairpins to hardware. No ceremony or program of any kind had been arranged for the grand opening, but 50 girl clerks were to be in attendance.

In 1967 the Wolverine Discount Store, James E. Busher, manager, was located here. In 1969 and 1970 Norman O. Skare was manager, and in 1971 Robert W. Schwarz managed the store, by then called Wolverine Drug.

In 1972 the business, then known as The Drug Store, was managed by Randy Dubey. In 1973 Dennis Vincenzi, pharmacist, was in charge of operations, and in 1974 Jim Swetkovich was manager. By 1976 Gary Marsden was listed as president of The Drug Store.