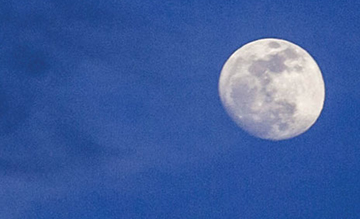 The biggest and brightest full moon of 2020 will occur at 10:35 p.m. Eastern time Tuesday.

IRON MOUNTAIN — After four straight months of above-average temperatures, the trend may continue into summer.

A long-range forecast from the Climate Prediction Center calls for a 46% chance of above-normal temperatures at Iron Mountain-Kingsford for the three-month period from April through June, and just a 21% chance of below-normal.

For precipitation, there are elevated odds for above-normal seasonal amounts for most of the central U.S., including the Upper Peninsula, he said.

In the short term, forecasters say additional snowmelt runoff and periodic showers next week will cause water levels to rise on rivers, streams and creeks. As of yet, there are no local flood advisories.

After rain or snow this morning, temperatures are expected to climb into the mid-40s today and the low 50s Sunday.

Temperatures in March averaged 32.2 degrees at the Iron Mountain-Kingsford Wastewater Treatment Plant, which was 5 degrees above the historial average but far below the record of 41.6 degrees set in 2012.

Water-equivalent precipitation measured 3.16 inches, which was 1.5 inches above normal. Only 2 inches of measurable snow fell in March, which was 8 inches below normal.

The biggest and brightest full moon of 2020 will occur next week, at 10:35 p.m. Eastern time on Tuesday. April’s supermoon is the second of three to take place in a row.

Further ahead, the Lyrid meteor shower is expected to reach its peak the night of April 21 into the early hours of April 22, which is Earth Day.

“This is the first major meteor shower since January and will bring 15 to 20 shooting stars per hour,” said AccuWeather meteorologist Brian Lada. “This year will be a particularly good year for the ‘Earth Day meteor shower’ as it occurs on a moonless night, meaning darker skies for onlookers,” he said.