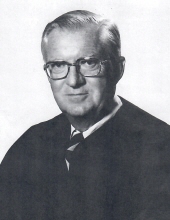 He was the youngest of six children born to Martin Harvey and Agnes Thomas Harvey, pioneer residents.

Jim was a member of the Iron Mountain High School, Class of 1940.

He attended the University of Michigan as an undergraduate before entering the U.S. Army Air Corps, where he served for three years during WWII.

After his military service, he graduated from the University of Michigan Law School and began his career as a city attorney in Saginaw.

He resigned from that position in 1953 to enter the private practice of law.

He was subsequently elected to the Saginaw City Council in 1955, became Mayor in 1957, and thereafter was elected to the U.S. House of Representatives where he served for seven terms, until 1973, when the late President Richard M. Nixon appointed him a Judge in the U.S. District Court for the Eastern District of Michigan.

He was preceded in death by his wife of 67 years, June Elizabeth Collins Harvey.

Cremation has taken place and his ashes will be buried in the Glendale Cemetery in Okemos, beside those of his son Tom and wife June, who predeceased him.

A memorial service will be held at 11 a.m. Saturday, Oct. 5 at St. Katherine’s

The family is being served by Watkins Brothers Funeral Homes, Laingsburg Chapel. Those wishing to leave online condolences to the family may do so at www.watkinsfuneralhomes.com.