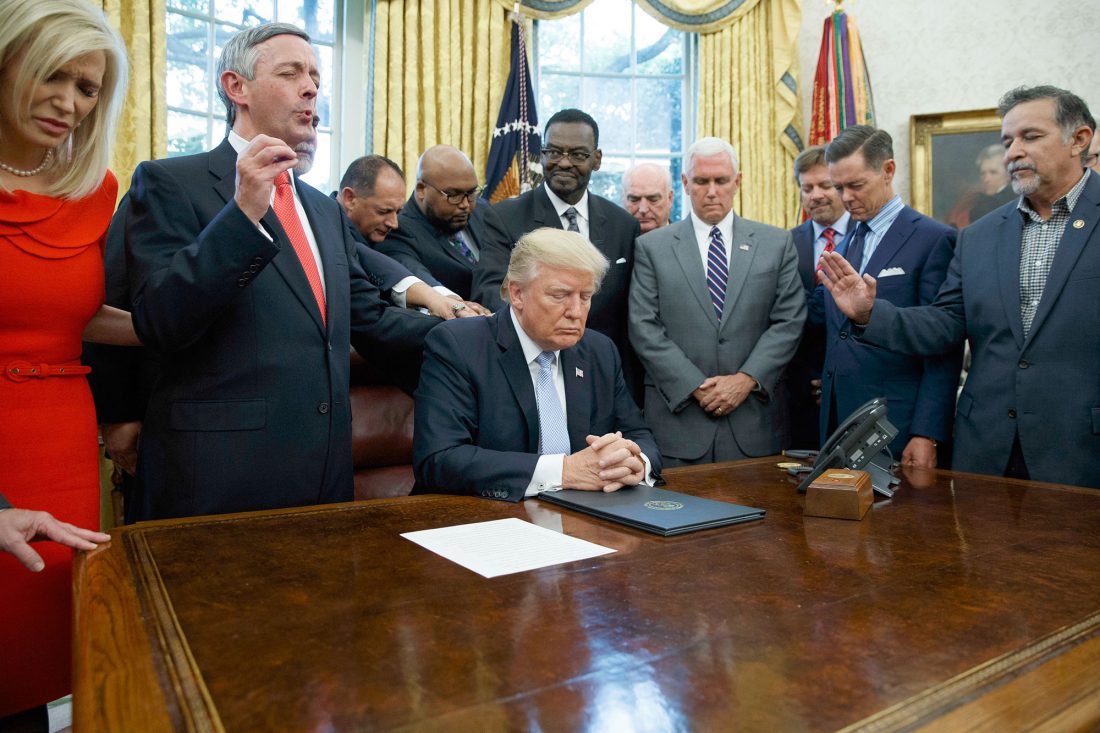 Religious leaders pray with President Donald Trump after he signed a proclamation for a national day of prayer to occur on Sunday, Sept. 3, 2017, in the Oval Office of the White House in Washington. (AP Photo/Evan Vucci, File)

White evangelical Protestants stand noticeably apart from other religious people on abortion restrictions and LGBT discrimination protections, two of the most politically divisive issues at play in the 2020 presidential election, according to a new poll.

The findings point to an evangelical Protestant constituency that’s more firmly aligned with President Donald Trump’s agenda than other Americans of faith. White evangelicals also were more likely than members of other faiths to say religion should have at least some influence on policymaking.

The Rev. Franklin Graham, son of the late Rev. Billy Graham and one of Trump’s most stalwart evangelical allies, pointed to the president’s record on abortion as a key driver of support from his religious community.

“I don’t think evangelicals are united on every position the president takes or says, but they do recognize he is the most pro-life-friendly president in modern history,” Graham said in a recent interview. “He has appointed conservative judges that will affect my children and grandchildren’s lives, long after he’s gone.”

Asked about significant restrictions that would make abortion illegal except in cases of rape, incest or to threats to a mother’s life, 67% of white evangelical Protestants responded in support. Those abortion limits drew 39% support from white mainline Protestants, 33% support from nonwhite Protestants, 45% support from Catholics and 37% of all Americans, according to the poll of more than 1,000 American adults from various faith backgrounds conducted by The Associated Press-NORC Center for Public Affairs Research.

A similar divide emerged over whether the government should bar discrimination against people who are lesbian, gay, bisexual or transgender in workplaces, housing or schools. About 6 in 10 Catholics, white mainline Protestants and nonwhite Protestants supported those protections, compared with about a third of white evangelical Protestants.

The differences between white evangelicals and other religious Americans, as well as the non-religious, were less stark on other policy issues examined in the poll.

Indeed, white evangelical Protestants’ preference for a religious influence on abortion policy surpassed most other issues examined in the poll. About 8 in 10 white evangelicals said religion should have at least some influence on abortion policy. A similar share said that of poverty, compared with about 7 in 10 saying the same about education and roughly 6 in 10 saying that about income inequality, immigration and LGBT issues.

Trump has embraced a staunch anti-abortion agenda, and his administration has opposed legislation supported by Democrats seeking to challenge him in 2020 that would extend broad anti-discrimination protections for LGBT individuals.

“There is nobody, except a few wackos who are one-half of 1%, that would ever want to discriminate against some of these groups,” said Stephen Strang, founder of the Christian magazine Charisma and author of a forthcoming book backing Trump’s reelection.

“But what happens is, this legislation is criminalizing long-held beliefs that we believe are scriptural,” Strang added, referring to conservative evangelicals’ opposition to same-sex marriage.

About 8 in 10 white evangelical Protestants approve of the president’s job performance, according to the poll, which asked respondents to self-identify as born-again or evangelical.

Trump’s reelection campaign plans to showcase that support today in Miami, where the president is set to unveil an “Evangelicals for Trump” coalition.

But not every Trump-backed policy found strong support in the poll from white evangelical Protestants. A majority of white evangelicals opposed an immigration policy that separates children from parents who are detained entering the country illegally, although nonwhite Protestants and white mainline Protestants opposed that policy by slightly larger margins.

“I disagree with the president on that one,” said Dorothy Louallen, 87, of Dunlap, Tennessee, who described herself as a born-again Christian opposed to abortion. “I really don’t think government and churches should be involved.”

The poll also showed a majority of white evangelical Protestants supporting higher taxes on the wealthy, albeit by smaller margins than the other major religious groups surveyed, as well as the non-religious. Trump signed a GOP tax bill in 2017 that cut taxes for the middle class but delivered a larger tax break for the wealthiest Americans.

Similarly, about half of white evangelicals showed support for increasing government aid to the poor, comparable to that policy’s support from Catholics and white mainline Protestants. About 7 in 10 nonwhite Protestants supported more government assistance for the poor. More than 600,000 low-income Americans are set to lose access to food stamps under new work requirements proposed by the Trump administration.

In addition, about 6 in 10 white evangelicals supported regulating the levels of carbon dioxide that power plants can emit, a climate change-fighting measure that Trump has weakened and that majorities of other religious groups also support, as well as those without a religious affiliation.

Americans without any religious affiliation registered stronger opposition in the poll than people of specific faiths to abortion restrictions (72%) and stronger support than people of specific faiths for government action to shield people who are lesbian, gay, bisexual or transgender from discrimination (83%). About one-quarter of Americans currently align with no religious faith, a figure that’s risen notably over three decades, according to the General Social Survey.

However, some Americans of faith continue to defy easy characterization — a trend that promises to scramble the political calculus heading into a 2020 campaign where Democrats have shown strong interest in connecting with voters of faith, even evangelicals whom Trump is often assumed to have locked down.

Courtney Lester, 29, of Macon, Georgia, said she was baptized in the Baptist faith but “can’t say I’m in one set religion.”

Once policymakers “mix religion with politics, that’s when things get very mixed up,” Lester added, noting she is “not here to judge anyone” of a different sexual orientation and praising immigrants for making America “great the first time.”

Lester, who is undecided in the election, said faith should play the same role in politics that it does in medicine: Doctors, she said, prioritize health rather than asking “Who is your God?” before they “see if you have the flu.”

The AP-NORC poll of 1,053 adults was conducted Dec. 5-9 using a sample drawn from NORC’s probability-based AmeriSpeak Panel, which is designed to be representative of the U.S. population. The margin of sampling error for all respondents is plus or minus 4.0 percentage points. Respondents were first selected randomly using address-based sampling methods and later were interviewed online or by phone.