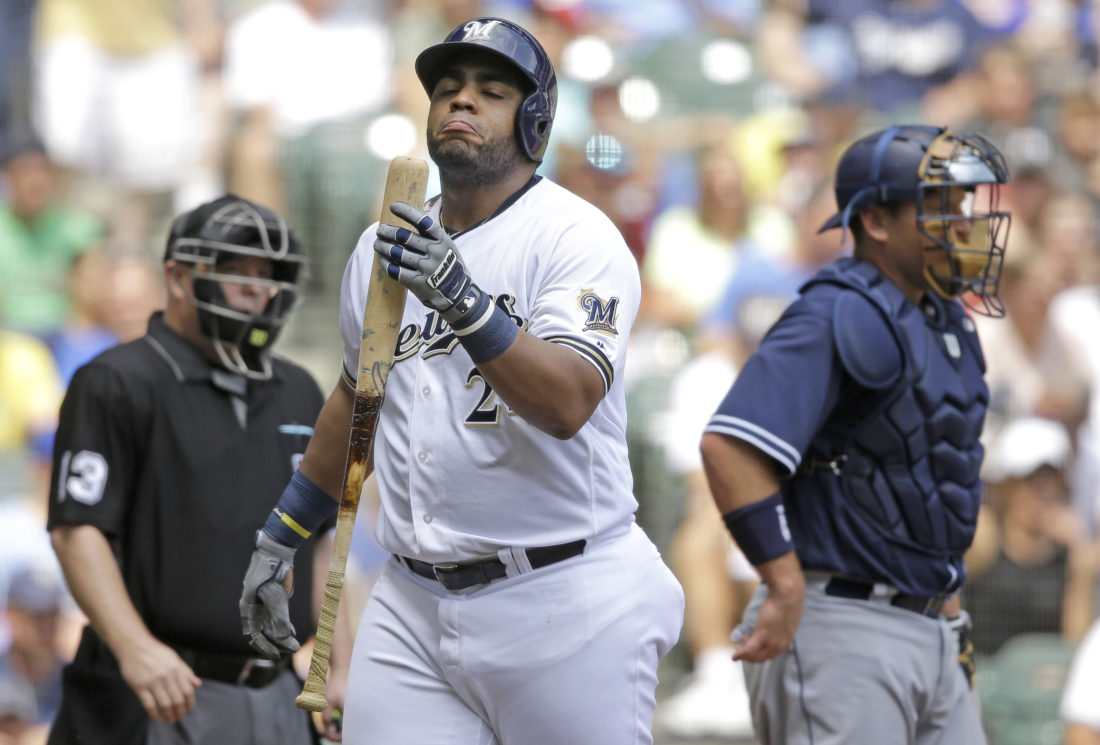 Milwaukee Brewers' Jesus Aguilar reacts after striking out against the San Diego Padres during the third inning on Thursday, Aug. 9, 2018, in Milwaukee. (AP Photo/Jeffrey Phelps)

Renfroe’s grand slam keyed a six-run rally that stunned the Milwaukee Brewers and gave the Padres an 8-4 victory on Thursday.

The Padres finished 4-3 on their Midwest road trip as they split four games with the Chicago Cubs and won two of three against the Brewers.

Knebel walked the bases loaded to open the ninth and gave up an infield single to Travis Jankowski, trimming Milwaukee’s lead to 4-3. Soria induced a flyout from Eric Hosmer and had a 1-2 count on Renfroe before the Padres left fielder turned on an inside pitch.

Renfroe did not chase an 0-2 pitch that just missed the strike zone.

“It was a great pitch; it was off the plate,” Renfroe said. “He dropped down a little bit. I was able to lay off it and I was able to get a pitch I could handle on the next pitch and drive it out of the ballpark.”

Franmil Reyes capped the six-run outburst with a solo homer to right field off Jacob Barnes.

Knebel (2-3) did not retire any of the four hitters he faced in the ninth.

“Couldn’t throw a strike,” Knebel said. “That was it. Nothing else going on. I just couldn’t find the zone.”

Brewers manager Craig Counsell said he may use other options to close games in the future.

“Whether it’s the seventh, eighth, ninth or sixth, we need those outs,” Counsell said. “I think the next time out, we’ll get him an easier spot for sure but at some point, we’re going to try to get him back to working big spots in the game.

“I think we function best when Corey handles the ninth, but if we have to do things a little differently to get him back on track, then that’s how we’ll approach it.”

Milwaukee finished a 3-3 homestand and dropped two games behind the first-place Cubs in the National League Central Division race.

Padres reliever Kirby Yates (4-0) pitched a scoreless eighth for the victory and Craig Stammen closed it out with a perfect ninth.

Brewers second baseman Jonathan Schoop, acquired from Baltimore before the trade deadline, was 3 for 26 with his new team before hitting a two-run double down the left-field line in Milwaukee’s three-run fourth inning. The hit broke a 1-1 tie.

Schoop scored the third run of the rally when he raced home from second base on Lorenzo Cain’s grounder that was misplayed by Padres shortstop Freddy Galvis.

The Padres cut the deficit to 4-2 on Galvis’ solo homer in the sixth.

Brewers: Soria suffered a groin injury in the ninth and was removed while pitching to Reyes.

EASY FOR YOU TO SAY: Newly acquired Mike Moustakas has become a quick hit with Brewers fans, judging from the “Moooose” calls going around Miller Park in the past week.

He hit a flyout to center as a pinch hitter on Thursday. He has a .268 batting average in his first 12 games with Milwaukee, while hitting two home runs and driving in six runs.

“It’s just personality,” Counsell said. “He’s an open book. He’s going to wear everything out in the open.

“He’s going to get his uniform dirty, dive and make plays like that. You can see from the stadium that the chants have started already. It’s fun to say ‘Moose’. It just is. It’s a fun word to say. It’s a good nickname as well and it’s easy to get attached to guys like that.”

Brewers: RHP Freddy Peralta (5-2, 3.54 ERA) will make his 11th start and second against the Braves as Milwaukee opens an eight-game road trip. He is coming off an 8-4 victory over Colorado on Saturday.

Braves: RHP Kevin Gausman (5-9, 4.47 ERA) was acquired in a trade deadline deal with Baltimore and lost his Braves debut on Aug. 4, a 3-0 defeat to the New York Mets. He allowed three runs and six hits in five innings.