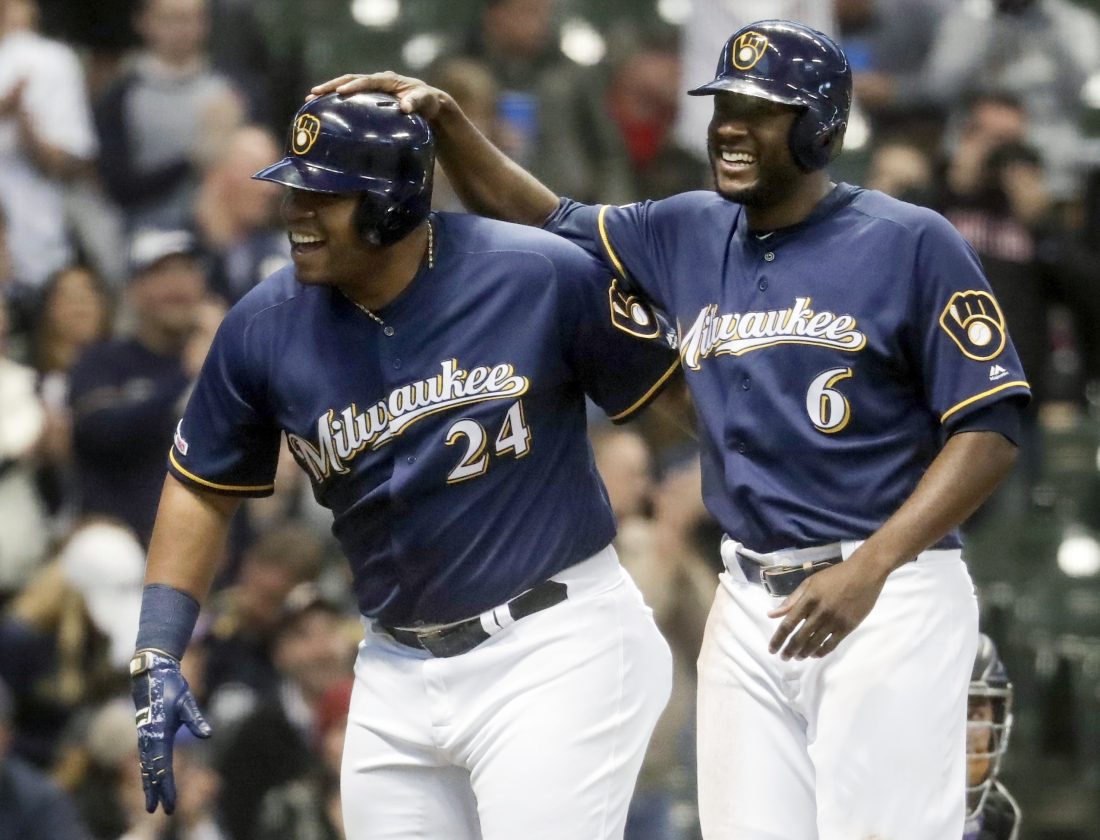 MILWAUKEE (AP) — After finally rediscovering his home run stroke, Jes˙s Aguilar is going to treat himself to some well-deserved rest.

The struggling slugger hit his first two homers of the season and the Milwaukee Brewers beat the Colorado Rockies 5-1 Monday night with NL MVP Christian Yelich sidelined by lower back soreness.

“This is going to be the first night where I’m going to sleep good,” Aguilar said. “There’s been a lot of nights where I’ve come back home thinking about hitting, watch video and all of that stuff. Tonight’s going to be one of those nights where I can be relaxed.”

Zach Davies allowed an unearned run in 5 1/3 innings, and Milwaukee opened a 10-game homestand with a breakout game from its beefy first baseman.

Aguilar entered hitting .123 after accruing 35 homers and 108 RBIs last season. He had a three-run homer in the first and added a solo shot in the third, both off Kyle Freeland. Aguilar also singled in the eighth and had four RBIs.

“It gave everybody a great big smile,” Brewers manager Craig Counsell said. “I think everybody felt like they could take a deep breath. He’s gone through a tough stretch, there’s no question about. And, you know it’s going to come eventually, I think everybody wants it to come and nobody wanted it more than Aggie to come, and I’m glad that it came with a couple runners on base.”

Davies (3-0) allowed three hits and lowered his ERA to 1.38. He struck out two and walked three. Alex Claudio, Jay Jackson and Donnie Hart combined to retire 11 of the final 12 hitters.

“It’s not overpowering stuff but he locates it well, he changes speeds and he keeps you off-balance,” Rockies manager Bud Black said. “There’s movement in the hitting area that keeps the good part of the bat from the ball. He’s sort of a classic pitcher’s pitcher.”

Freeland (2-4), who had been sidelined with a blister on his left middle finger, came off the injured list and allowed five runs and six hits in six innings in his first start since April 18.

“My location wasn’t there like it usually is,” Freeland said. “They weren’t really cueing on fastballs in. They were laying off them pretty well. I know this team wants fastball out and over. They weren’t cueing on stuff inside so we had to start mixing it up and I started missing in the middle of the zone and they were tagging it.”

Yelich was pulled from Milwaukee’s 5-2 loss to the Mets on Sunday after injuring his back running the bases. Counsell said Yelich was feeling better, but the team planned to be cautious. Yelich missed time last June with a similar issue.

The Rockies snapped a 24-inning scoreless streak against the Brewers with a run in the sixth on a walk to Daniel Murphy, an error by shortstop Orlando Arcia and David Dahl’s RBI single off Davies’ glove.

Milwaukee has won 11 of its last 13 against Colorado, including a sweep in last season’s NL Division Series with shutouts in the final two games.

Aguilar, who had just five RBIs and two extra-base hits in his first 73 at-bats, put the Brewers up 3-0. Lorenzo Cain doubled to open, and Ryan Braun drew a one-walk. Aguilar then sent a 1-1 pitch from Freeland out to center.

Rockies center fielder Ian Desmond prevented an extra-base hit by Yasmani Grandal to end the fourth with a sensational diving catch after a long run into the gap in left-center.

Desmond the led off the fifth and was ejected by home plate umpire Jeff Nelson after a lengthy discussion following a called third strike.

Brewers: RHP Aaron Wilkerson was placed on the 10-day injured list with a left foot contusion.

Hart and Jackson were called up from Triple-A San Antonio, and RHP Alex Wilson was designated for assignment. Jackson struck out Nolan Arenado in the eighth, the only batter he faced, in his first appearance in the majors since 2015 with San Diego.

Rockies: RHP German Marquez (3-1, 2.54 ERA) starts the second game of the four-game series. Has pitched at least five innings in each of his six starts and has the Rockies only complete game.