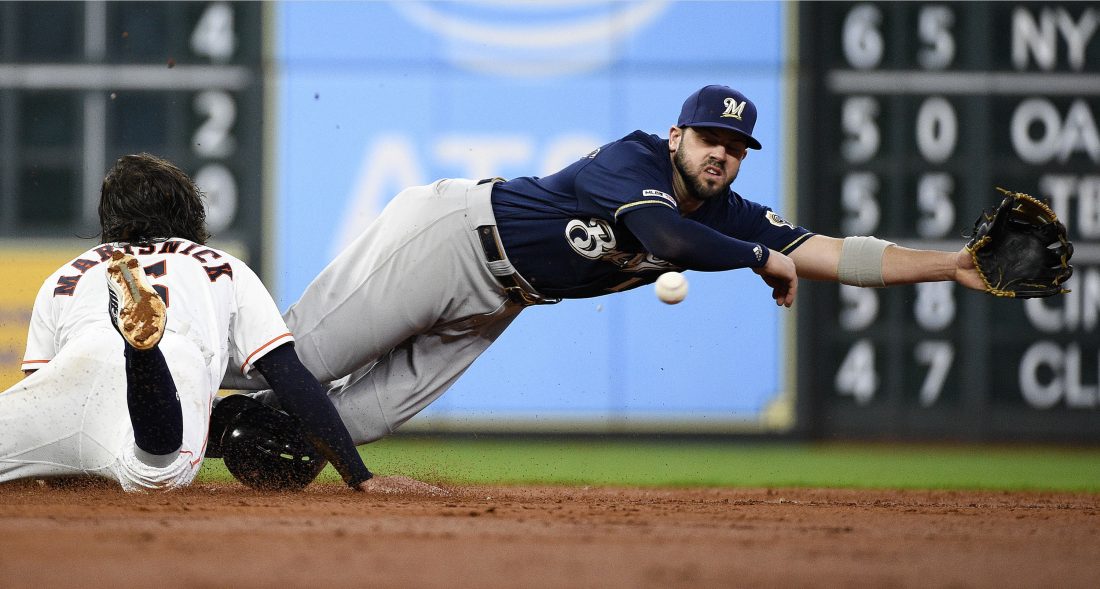 HOUSTON (AP) — Yordan Alvarez’s teammates told the slugger they’d fine him if he didn’t homer in his first game for the Houston Astros.

After he connected in his debut they warned him that the fine would be double if he didn’t knock one out of the park in Game 2.

So far, Alvarez isn’t out a dime.

Alvarez hit one of Houston’s four home runs to become the first player in franchise history to homer in his first two major league games and lead the Astros to a 10-8 win over the Milwaukee Brewers on Tuesday night.

“It’s something incredible and emotional. I can barely describe it, to be able to hit two home runs in my first two games in the big leagues,” Alvarez said through a translator.

Yuli Gurriel, Robinson Chirinos and Tyler White also homered for the Astros, who won for the fourth time in five games.

Houston led by one in the fifth when Michael Brantley hit a run-scoring triple to chase Freddy Peralta (3-3). He was replaced by Matt Albers, who was greeted with a single by Gurriel which pushed the lead to 6-3. Alvarez then knocked a changeup by Albers into the right field seats to extend the lead to 8-3.

The 21-year-old Alvarez, who led the Pacific Coast League with 23 homers, also had a two-run shot in his debut on Sunday. He is the first player since Trevor Story in 2016 to homer for the first two hits of his career.

Manager AJ Hinch was impressed with how Alvarez bounced back with his homer run after striking out in his first two at-bats on Tuesday night.

“I haven’t been around him enough to see how he really responds to the success or failure,” Hinch said. “But after the couple of punch outs, he stays on the ball, he’s got tremendous strength … it was a nice swing. We needed as many runs as we could get tonight.”

Travis Shaw hit a solo homer for the Brewers in the seventh before a two-run home run by Chirinos in the bottom of the inning extended Houston’s lead to 10-4.

The Brewers added a run on a bases-loaded walk in the eighth and got within two on Yasmani Grandal’s three-run homer off Chris Devenski with two outs in the ninth. But Devenski struck out Eric Thames to end it.

Peralta took the loss by giving up eight hits and six runs in four-plus innings.

“I thought some of the pitches were good … sometimes that’s concerning too, just because they’re hitting your good pitches, that’s trouble,” manager Craig Counsell said. “He threw strikes again. He attacked. That part I liked. Obviously, the home runs and the driven balls got him.”

Christian Yelich hit his MLB-leading 25th home run and finished a triple shy of the cycle as Milwaukee’s four-game winning streak was snapped. It was his second straight game with a home run and extended his hitting streak to a season-high nine games.

“I could not see Yelich hit again and I’d be fine,” Hinch said. “He’s really good.”

The Brewers led 1-0 early after an RBI single by Grandal with two outs in the first inning. Tony Kemp singled with one out in the second before White put the Astros on top 2-1 with his opposite-field shot to the seats in right.

Yelich homered to the bullpen in right-center to start the third and tie it at 2-2.

Houston regained the lead when Brantley doubled before Gurriel’s fifth home run this season made it 4-2. Gurriel had three hits and drove in three runs.

Orlando Arcia singled to start the fifth and scored on a double by Ben Gamel to get the Brewers within 1 before Houston’s big fifth.

Brewers: RHP Jhoulys ChacÌn (lower back strain) threw an extended bullpen session of about 50 pitches on Tuesday. Counsell said he expects him to come off the injured list to start during their series in San Diego, which begins on Monday.

Chirinos has five home runs this month, which is tied for second-most in the majors. He has 11 home runs in 50 games this season after finishing with a career-best 18 in 113 games last year.

Brewers: RHP Brandon Woodruff (8-1, 3.87 ERA) is scheduled to start for Milwaukee on Wednesday night. Woodruff allowed four hits and three runs while striking out 10 in his last start against Pittsburgh to win his seventh straight decision.

Astros: RHP Justin Verlander (9-2, 2.40) will start for Houston on Wednesday. Verlander yielded five hits and three runs with seven strikeouts in six innings in his last start but did not factor into the decision in Houston’s 8-7 win over Seattle in 14 innings.