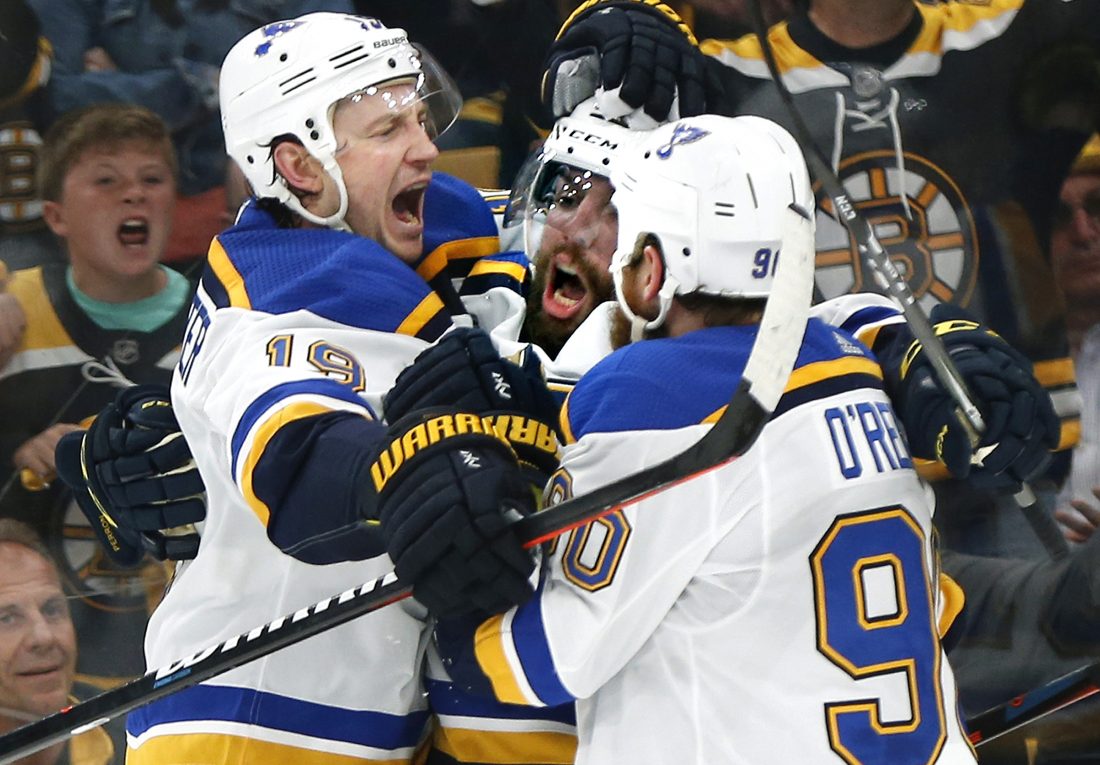 BOSTON (AP) — From last place in the league to the brink of their first Stanley Cup championship, the St. Louis Blues need one more win to complete their improbable journey.

They have a young goaltender leading the way.

Jordan Binnington stopped 38 shots, and the Blues withstood the emotional rush of Zdeno Chara’s return to beat the Bruins 2-1 on Thursday night and take a 3-2 lead in the best-of-seven final. They can win the championship at home in Game 6 on Sunday night.

“We’ve had quite the season so far. We’ve been through quite a lot,” defenseman Colton Parayko said. “But we continued to battle. We never gave up on each other. It put us closer together, especially now.”

One game after chopping down the Bruins’ giant captain with a deflected puck off his jaw, the Blues quieted the rest of a city still celebrating its last championship: The New England Patriots were receiving their Super Bowl rings a few miles away, the second in what Bostonians hoped would be a third title in the last 12 months.

But it’s St. Louis — whose Rams lost to the Patriots in the 2002 Super Bowl, and whose Cardinals fell to the Red Sox in the 2004 and 2013 World Series — that is one win from skating off with the Stanley Cup.

“We’ve got a big job ahead of us, that’s the way I look at it,” said coach Craig Berube, who took over when Mike Yeo was fired in November with the team mired in last place in the Central Division. “I hope our team looks at it that way.”

Ryan O’Reilly and David Perron scored for St. Louis, which has won two straight since a 7-2 loss at home in Game 3. It was the first time in the series a team has won two in a row.

“It’s behind us now, but it’s tough,” said Bruins forward Noel Acciari, who was flattened on what the Bruins thought was an illegal hit right before Perron’s goal. “Tough pill to swallow. It’s a must-win from here on out.”

Chara left Game 4 dripping blood after taking that puck off his face, but he gave the building a lift when he followed Rask onto the ice for the pregame skate wearing a full-face shield. He got a lengthy cheer for his introduction, and he went out of the way to deliver the game’s first hit, just 15 seconds in, on Brayden Schenn. When things went bad later, the crowd tried to spur the team on with chants of “Chara!”

But the 42-year-old defenseman’s toughness could only carry so far.

O’Reilly scored in the opening minute of the second period, backhanding in a rebound for his third goal in his last five periods. It was still 1-0 midway through the third when the referees disregarded a leg sweep by Tyler Bozak that knocked Acciari out of the game. But he was still on the ice when Perron followed with a shot that banked off Rask’s pad and into the net. The fans responded with a vulgar chant and a shower of rally towels; the public address announcer eventually asked them to stop.

Boston did seem inspired — or at least desperate — and cut the deficit to one goal on a delayed penalty with about 6 1/2 minutes left. Torey Krug took a high stick to the face at the blue line but he played on, straightened his helmet and dished the puck to DeBrusk for a one-timer past Binnington.

Boston pulled Rask with a little more than a minute left and earned several chances, but couldn’t get the puck past Binnington.

Notes: Binnington’s nine playoff road wins is the most by a rookie in NHL history. Ron Hextall won eight in 1987. … Derek Sanderson and Bobby Orr, the connection that gave the Bruins the game-winning goal against the Blues in the 1970 clincher, were the pregame banner wavers. … Actors Michael J. Fox, Woody Harrelson and John Krasinski were in the crowd. … Blues D Vince Dunn was in the lineup after missing almost three weeks after taking a puck to the face. … Boston D Matt Grzelcyk missed his third straight game. … The Blues improved to 9-3 on the road in the playoffs.

The series returns to St. Louis, where the teams split Games 3 and 4. The Blues are 6-6 at home so far in the postseason.