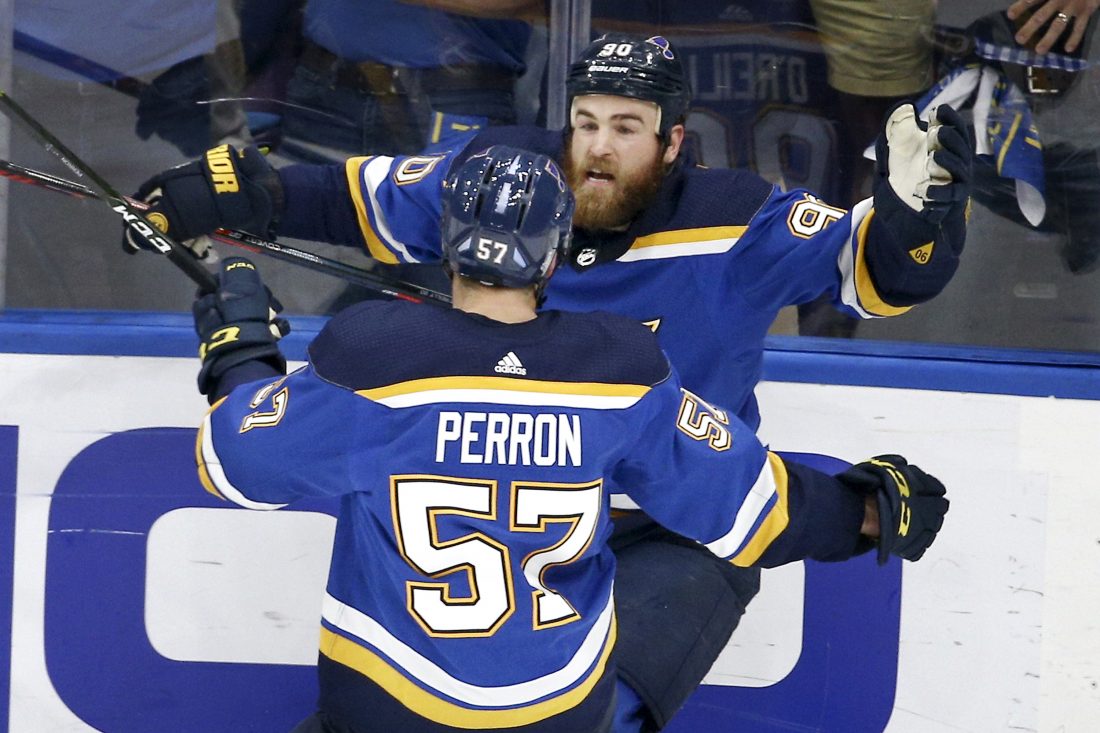 St. Louis Blues center Ryan O'Reilly (90) celebrates with David Perron (57) after O'Reilly scored his second goal of the game during the third period of Game 4 of the NHL hockey Stanley Cup Final against the Boston Bruins on Monday, June 3, 2019, in St. Louis. (AP Photo/Scott Kane)

ST. LOUIS (AP) — Ryan O’Reilly scored the go-ahead goal midway through the third period for his second of the night, and the St. Louis Blues thrived in a chaotic Game 4 of the Stanley Cup Final on Monday night to beat the Boston Bruins 4-2 and tie the series at two games apiece.

O’Reilly ended an eight-game goal drought by scoring 43 seconds into the game and with 9:22 left in the third period. The game was a back-and-forth thriller, with Boston’s Tuukka Rask and St. Louis’ Jordan Binnington each giving up tons of rebounds for frantic scoring chances and scrums. Boston captain Zdeno Chara getting was knocked out of the game by a puck to the mouth.

Vladimir Tarasenko also scored for the Blues, and Binnington made 21 saves to improve to 7-2 in the playoffs after a loss. Even more impressive was the rookie’s bounce-back from being pulled in Game 3 for the first time in his NHL career.

Rask allowed three goals on 37 shots and was on the receiving end of Blues onslaughts at times. Charlie Coyle scored for the third consecutive game, and Brandon Carlo had a short-handed goal for Boston, which was worn out by going down to five defensemen again after Chara left the bloodied.

Game 5 is Thursday night in Boston.

O’Reilly was dominant all over the ice after a bad Game 3 in which he lost the majority of his faceoffs and couldn’t get anything going. He had a multigoal game for the first time since November.

Hockey Hall of Famer and Blues alum Brett Hull screamed at the top of his lungs into the microphone to pump up the crowd seconds before puck drop, “Are you ready? Let’s Go Blues!”

They were ready, all right, and O’Reilly’s early goal came after Rask allowed the first of many juicy rebounds off a shot from defenseman Vince Dunn. Zach Sanford retrieved the puck and O’Reilly tucked the it inside the post on a wraparound.

It was the sixth time in the playoffs St. Louis scored in the opening two minutes, which it has now done in all four rounds. The Blues are 6-0 in those situations.

Coyle continued his hot run by tying it at 13:14 in when Binnington allowed a big rebound of Chara’s initial shot. Coyle has nine playoff goals and is close to building a decent Conn Smythe Trophy case as playoff MVP.

Less than two and a half minutes after Coyle’s goal, Tarasenko scored on a rebound off captain Alex Pietrangelo’s shot to give the Blues the lead back going into the first intermission.

St. Louis improved to7-3 when leading after 20 minutes by responding well to yet another poor look on special teams: The Blues killed off a Bruins power play and then hemmed Boston in its own end for more than three minutes. While St. Louis cycled the puck in the offensive zone and changed several forward lines and defensive pairings, Boston defenders were gassed and Connor Clifton took a penalty for an illegal check to the head of Tarasenko.

Twenty-six seconds into the Blues power play, the Bruins inexplicably got numbers on a rush and Carlo scored shorthanded to tie it again. It was the fourth shorthanded goal St. Louis has allowed in the playoffs to only 13 power-play goals.

After trading power plays in the third period, O’Reilly scored on another Rask rebound of a Pietrangelo shot midway through the third period. With St. Louis leading, fans could happily sing John Denver’s “Country Roads” at the under 6-minute timeout, and Brayden Schenn sealed it with an empty-net goal with 1:29 left.

When the final horn sounded, they played Laura Branigan’s “Gloria” to celebrate the Blues’ first-ever home victory in the Stanley Cup Final.

NOTES: Sundqvist returned from a one-game suspension for boarding Bruins D Matt Grzelcyk, who missed his second game in a row. Sanford remained in the lineup, and Robby Fabbri was a healthy scratch. … Dunn replaced D Robert Bortuzzo in the St. Louis lineup.

The Blues and Bruins start all over again with a three-game series for the Cup with Game 5 in Boston on Thursday night.