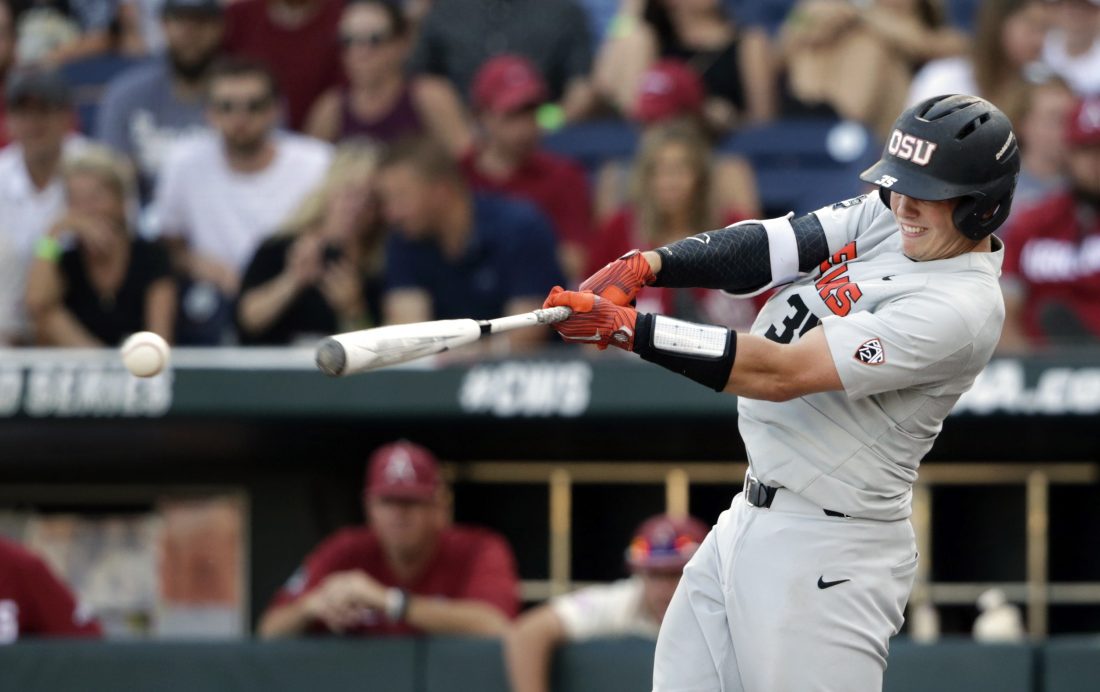 Oregon State's Adley Rutschman hits an RBI single in Game 3 against Arkansas in the NCAA College World Series baseball finals on June 28, 2018 in Omaha, Neb. The Baltimore Orioles selected Rutschman with the No. 1 pick in the MLB draft on Monday. (AP Photo/Nati Harnik, File)

SECAUCUS, N.J. (AP) — Adley Rutschman heard the chatter for months that he’d be the No. 1 pick in the Major League Baseball draft.

The switch-hitting Oregon State catcher just kept slugging at the plate and throwing out would-be basestealers all season from behind it — making it an easy call for the Baltimore Orioles on Monday night.

“It’s unbelievable,” Rutschman said from Goss Stadium in Corvallis, Oregon, shortly after becoming the top selection. “Just to look back on how I was as a kid and seeing what my expectations were, how far I’ve come from there, it’s special.”

The announcement by Commissioner Rob Manfred at MLB Network studios marked the second time the Orioles led off the draft — they took LSU pitcher Ben McDonald in 1989.

“I met with all the teams over the course of the year and knew the Orioles were going to be the first overall,” said Rutschman, a 40th-round pick by Seattle three years ago. “As the year progressed and went along, it looked like it was a possibility more and more. It just worked out that way.”

The younger Witt has draft-day bragging rights on his father, who won 142 games over 16 seasons after being selected No. 3 overall by Texas in 1985.

The rebuilding Orioles had the No. 1 pick after plummeting to the worst record in the majors last season. They’re at the bottom of the standings again with an 18-41 start — but getting Rutschman provides hope for a franchise that finished last in the AL East the past two years.

“He’s everything you want and he plays a premium defensive position with athleticism that gives him versatility to play elsewhere, as needed,” Orioles general manager Mike Elias said in a video statement posted on the team’s Twitter account. “A future fixture for this organization.”

The 21-year-old Rutschman had been the favorite to go first overall since he led Oregon State to the College World Series championship last year and was selected the most outstanding player.

He followed that up with a dominant junior season for the Beavers, hitting .411 with a career-best 17 homers to go with 58 RBIs and a school-record 76 walks. On defense, he threw out 13 of 27 runners attempting to steal.

Rutschman, a native of Sherwood, Oregon, is a finalist for the Golden Spikes Award given to the country’s top college player. He was the Pac-12 player of the year and the conference’s co-defensive player of year.

His selection marked the seventh time a player drafted as a catcher was taken with the top pick, and first since Minnesota tabbed Joe Mauer in 2001.

“The amount of work that goes into what he’s done and becoming the No. 1 pick is not something that’s ordinary,” Elias said. “I met Adley this winter and was immediately struck by him and impressed by his maturity and leadership.”

“The dreams are kind of turning into reality,” the younger Witt said.

Vaughn batted .381 this season with 15 homers and 50 RBIs, and struck out just 74 times in three college seasons. The 6-foot, 214-pound Vaughn is also looking to become the first repeat winner of the Golden Spikes Award after earning the honor as a sophomore last year.

Cal had the only set of teammates — college or high school — drafted in the first round, with Golden Bears catcher Korey Lee going 32nd overall to Houston.

Miami drafted Vanderbilt outfielder JJ Bleday at No. 4, adding the Southeastern Conference player of the year who leads Division I players in home runs with a school-record 26. A finalist for the Golden Spikes Award, the lefty-hitting Bleday brings a 42-game on-base streak into next weekend’s super regionals round of the NCAA Tournament.

More draft history was made when San Diego selected speedy Georgia high school shortstop CJ Abrams at No. 6, marking the first time no pitchers were taken within the first six picks.

In a draft light on premier pitching prospects, 22 of the 34 first-round picks were position players — setting a draft record.

TCU left-hander Nick Lodolo ended the early run on hitters, going seventh overall to Cincinnati. Lodolo was the 41st overall pick by Pittsburgh in 2016 — the highest selection to go unsigned that year.

Texas Tech third baseman Josh Jung , the co-Big 12 player of the year, was the eighth pick by Texas.

Atlanta took Baylor catcher Shea Langeliers with the ninth selection — which the Braves received as compensation for not signing last year’s No. 8 pick, pitcher Carter Stewart, who was eligible for this year’s draft but instead inked a six-year contract last week with the Fukuoka SoftBank Hawks of Japan’s Pacific League that will guarantee him as much as $7 million.

Langeliers threw out 14 of 25 would-be basestealers this season and set an NCAA Tournament record with 11 RBIs in a three-homer game against Omaha last Saturday night.

Texas high school third baseman Brett Baty was the first of the four prospects in attendance to be drafted, going 12th overall to the Mets.

Right-hander Brennan Malone from IMG Academy in Florida was the last of the players on site to find out where he’ll be starting his pro career, going 33rd to Arizona — with Hall of Famer Randy Johnson announcing his selection as the Diamondbacks’ representative.

“That was awesome,” a beaming Malone said.