Badgers look to prove ‘18 was a blip, claim West title 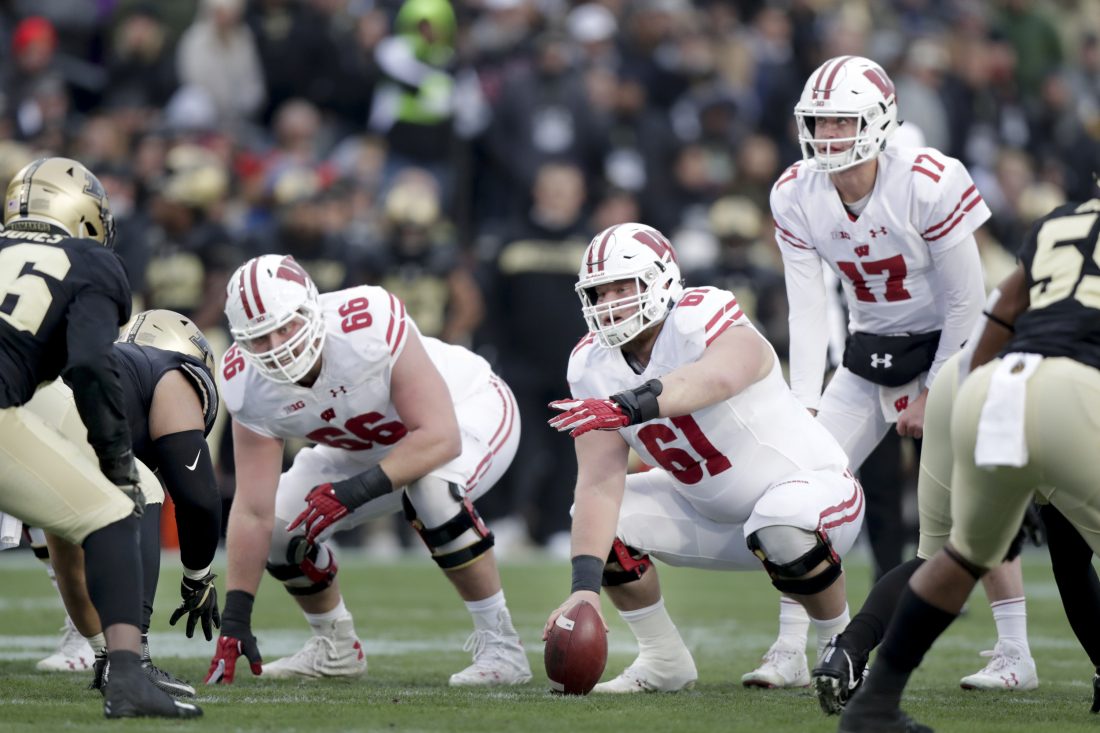 Wisconsin's Tyler Biadasz (61) gestures as he prepares to snap the ball to quarterback Jack Coan during a 2018 game in West Lafayette, Ind. Returning starting center Biadasz, who underwent hip surgery during the offseason, will anchor the line after earning first-team All-Big Ten honors in 2018. (AP Photo/Michael Conroy, File)

MADISON, Wis. (AP) — Wisconsin won eight games a season ago, its fewest since 2012 and fewest under coach Paul Chryst.

“You hope it’s a blip, right? And yet, that’s the beauty of this season,” said Chryst, who is in his fifth year at the helm of the Badgers’ program. “You’ve got to go out and play it and you’ve got to earn it.”

Chryst said his team needs to be smarter — knowing the situation and down and distance — in order to see the same success it experienced in 2017. That Badgers team finished as Big Ten West champions after compiling a school-record 13 wins. Last year’s 8-5 mark included a lackluster 5-4 record in league play.

Wisconsin’s success hinges heavily on the legs of junior running back Jonathan Taylor, an AP first-team All-American a year ago who has rushed for 4,171 yards, the most ever by an FBS player through his first two seasons. That’s also the highest career total among all active FBS players.

“He’s our best player,” Chryst said. “But he’s also one of the best workers on this team. You’d hate to think — any coach or player — that you’ve arrived and that you’re there. He certainly doesn’t think that.”

The question remains: Who will be blocking for the Big Ten’s top back when the Badgers open the season Aug. 30 at South Florida?

Holes in the O-line

The Badgers lost four starting offensive lineman from a year ago, including guard Michael Deiter and tackle David Edwards who were both taken in the NFL draft. Guard Beau Benzschawel signed with the Lions as an undrafted free agent. Deiter and Benzschawel started a combined 103 games and made up one of the best run-blocking guard combinations in the nation. Offensive coordinator and line coach Joe Rudolph said he expects sophomores Josh Seltzner and Kayden Lyles and seniors Jason Erdmann and David Moorman to compete for starting spots. Moorman played tackle, guard and center during the spring.

Returning starting center Tyler Biadasz, who underwent hip surgery during the offseason, will anchor the line after earning first-team All-Big Ten honors in 2018.

“I have the most experience, yeah, but I think Cole Van Lanen, Jason Erdmann, Logan Bruss, they’ve all had great experience as well,” Biadasz said. “I don’t think we’re nervous. We’re excited. We’re here to prove that we’re getting back to Badger football and having a better season than last year.”

To play or not to play

Graham Mertz is among the most talked about freshmen in the history of the program. Fans are eager to see what the 6-foot-3, 215-pound quarterback from Kansas can do, especially since last year’s starter, Alex Hornibrook, transferred to Florida State.

“I don’t think there’s anything fake about that kid,” Rudolph said of Mertz. “I think he’s very confident in his abilities and what he can do.”

A new redshirt rule allows Mertz to play up to four games without losing a year of eligibility. Junior Jack Coan, sophomore Danny Vanden Boom, redshirt freshman Chase Wolf and Mertz are vying for the starting job, with Coan being the only one of the four with meaningful college experience. Coan went 2-2 in four starts last season.

The Miami Dolphins drafted outside linebacker Andrew Van Ginkel in the fifth round, and now the Badgers must sift through a number of candidates to find his replacement. Chryst said Zach Baun will need to “elevate his game,” but also said that position “will need to play itself out in camp.”

The Badgers return every cornerback and still have no seniors at the position. Chryst said he expects sophomore Faion Hicks to take a huge leap after 35 tackles and an interception in 12 games (11 starts) last season.

“It seems to me like there’s fewer highs and lows and he’s trusting himself, he’s trusting the technique,” Chryst said. “I think when you do that, you start to play.”

The Badgers get Michigan, Michigan State and Northwestern at home. They must visit Ohio State and Nebraska.

“I think you have to take it week to week,” Chryst said. “You look at the schedule and you’re aware of it but our job and the challenge that we have is the opportunity to make the most out of each week.”

Wisconsin finished three games behind Big Ten West champion Northwestern last season but have gone 34-9 (.791) in Big Ten play over the last five seasons. Only Ohio State (39-4, .907) has been better.