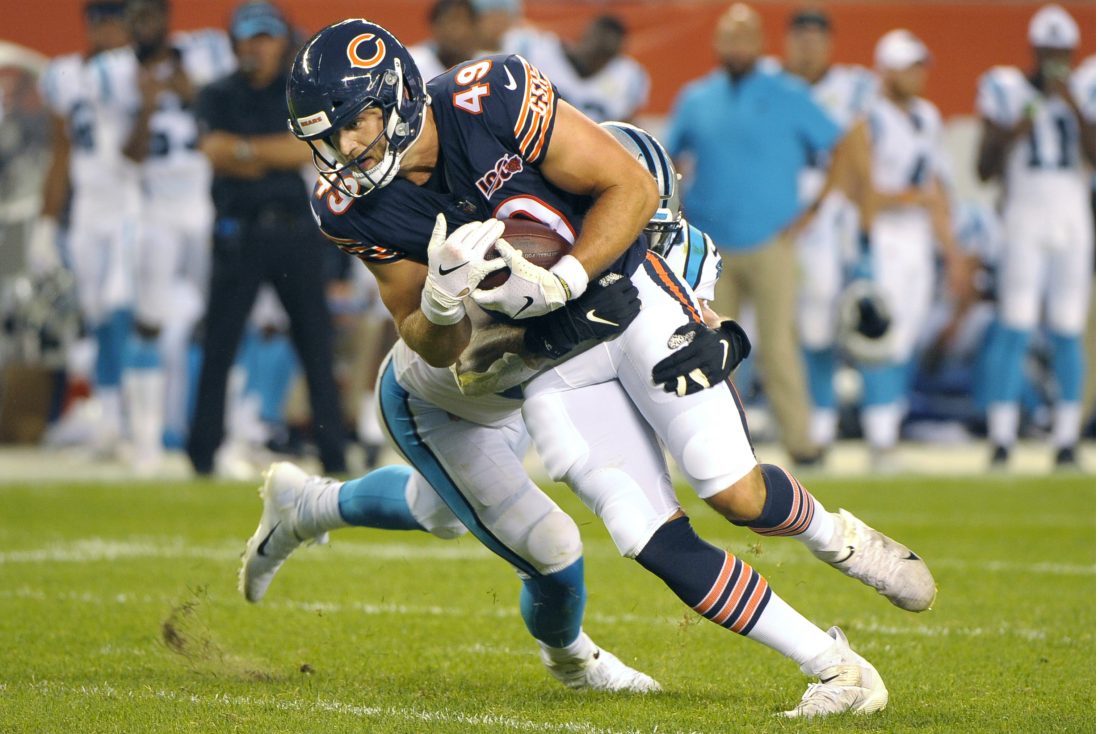 BOURBONNAIS, Ill. (AP) — There was a shoving incident, a coach screaming at his players and the usual unresolved kicking competition.

The Chicago Bears broke Bourbonnais training camp after Sunday’s practice and headed back for Halas Hall without finding the answer to their greatest problem.

They’ll continue their search for a kicker between Eddy Pineiro and Elliott Fry after the two combined for five misses Sunday, with the acquisition of another kicker still a possibility.

“We’re evaluating them, again, looking at what they do in these preseason games is going to be really the true test,” coach Matt Nagy said of his kickers. “But we’re looking for that production.”

Nagy said he doesn’t expect all the kicks to be made, even if the goal is production.

“They’re probably exactly where I thought they’d be,” Nagy said. “I mean, it’s one preseason game. I’m anxious to see how this thing is going to go after four total preseason games and really hopefully they can get some decent attempts and we get a feel for it.”

Beyond kicker, the Bears are virtually where they were heading into camp, although wide receiver Anthony Miller is now out with a right ankle sprain and tight end Trey Burton continues to miss practices after a slow recovery from sports hernia surgery.

Burton was expected to be back for the start of camp, practiced five days and has been out resting ever since.

“This plan that we have, we’ll slowly just kind of get him back, see how he’s feeling and we’ll go off of that,” Nagy said. “We want to make sure he’s right for Sept. 5.

“Quite honestly, I could(n’t) care less about the preseason.”

Burton’s surgery was in the spring. He missed the preseason opener and has been running on the side the past two practices.

“It’s been really frustrating,” Burton said. “I want to be out there with the guys. I can’t stand sitting on the sideline and not playing. It’s really, really been frustrating from that standpoint, but I know there’s a bigger picture in mind.”

Nagy called the training camp a success because he knows more about new players. In particular, safety Ha Ha Clinton-Dix and running back David Montgomery have stepped up.

Montgomery ran for 16 yards on three attempts with a touchdown and caught three passes for 30 yards in the preseason-opening 23-13 loss to Carolina and it’s possible his carries will get limited through the rest of preseason. The Bears play at the Giants on Friday night.

“Put it this way: I’m going to protect David from David,” Nagy said. “Take that for what it’s worth.”

Clinton-Dix started camp watching after a knee sprain in organized team activities during the spring. However, he quickly got off the physically unable to perform list and began producing. The former Packers and Redskins safety picked off quarterback Mitchell Trubisky in scrimmage during the final practice for what would have been a pick-6.

“I haven’t been part of a group like this since I was a rookie in the league,” Clinton-Dix said. “Being able to be around this many guys with this much talent, elite players in the front seven, it’ll make my job a lot easier.”

One key goal for the offense heading into camp was getting Mitchell Trubisky and the receivers more in sync. They don’t view Clinton-Dix’s interception or any in a series of interceptions Trubisky has thrown in recent practices as a cause for concern.

“Yesterday he had two throws, probably his two best throws of camp that he threw that there’s not that many quarterbacks in this league can make that throw,” Nagy said. “He had two of them yesterday. Today he tried to squeeze one in there right at the end of practice, in between Buster (Skrine) and the safety and Buster jumped up and tipped it.

“They get it,” Nagy said. “They’ve seen coaches get on them before. That’s not a first time. They react well. And they’re all, again I’m going to always revert back to that when you have high character people, they can handle that.”

NOTES: Outside linebacker Aaron Lynch was held out of Sunday’s practice with a shoulder injury. … Tight end Adam Shaheen is practicing now after missing Thursday’s preseason game because of back soreness. … Wide receiver Riley Ridley has returned to practice after suffering a hamstring pull the first day of practices.