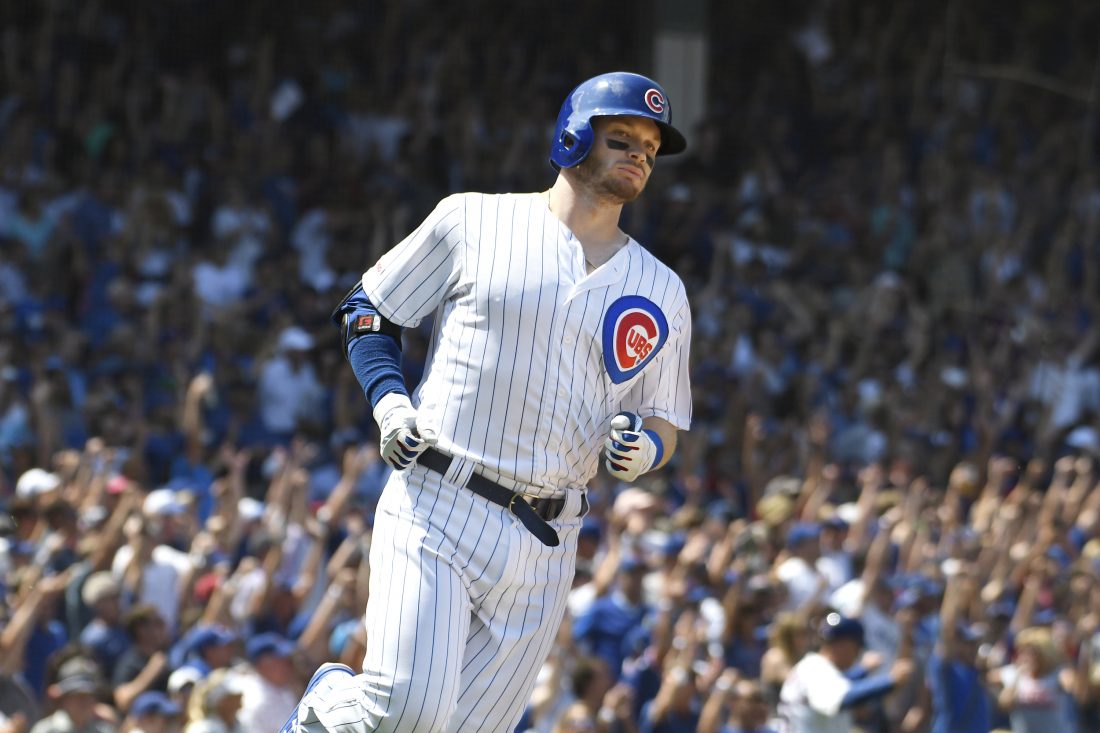 Kyle Schwarber hit a three-run homer, Victor Caratini connected and Javier Baez kept up his latest hot streak with two hits and two RBIs as the Cubs responded with a rout of their own after Oakland pounded them 11-4 on Tuesday night. NL Central-leading Chicago took two of three from the A’s and won its fifth in six games.

Baez was replaced at shortstop by David Bote in the eighth after fouling a pitch of his left leg in the seventh. Last year’s NL MVP runner-up, Baez is batting .478 (11 for 23) with nine RBIs in a six-game hitting streak.

Quintana (10-7) allowed one run, struck out seven and walked one. David Phelps and Pedro Strop each followed with a scoreless inning to wrap up a three-hitter.

The Athletics got their only run off Quintana in the fourth when Marcus Semien led off with a double and scored on Matt Olson’s sacrifice fly. Oakland lost for just the third time in its last 10.

Happ, recalled from Triple-A on July 26, went deep for second time in three games against Oakland as he made his first start at second base in nearly two years.

A’s starter Homer Bailey (9-8) set down nine of the first 10 hitters before Chicago scored five runs in the fourth. The right-hander yielded seven runs in 4 2/3 innings in his fifth start since arriving in a arriving in a trade from Kansas City on July 14.

Baez singled in Chicago’s first run in the fourth to tie at 1 before the Cubs loaded the bases with one out. Batting left-handed, the switch-hitting Happ stroked Bailey’s first pitch into the left-center bleachers to make it 5-1.

Baez singled in another run off Bailey to start Chicago’s four-run fifth. With two runners on, Schwarber muscled his 26th homer, an opposite-field shot to left-center, off reliever Lou Trivino to make it 9-1.

Caratini homered off Blake Treinen in the eighth.

Baez crumpled when he fouled a pitch of his left leg in the seventh inning. After a trainer attended to him, he finished the at-bat and ran gingerly to first base as he grounded into a double play.

Cubs LHP Cole Hamels (6-3), 2.84) looks to stay on track against Reds LHP Alex Wood (1-0, 3.18) at Cincinnati on Thursday. Hamels pitched five shutout innings versus Milwaukee last Saturday in his return from a five-week stint on the IL, and is 2-2 with a 1.07 ERA in his last seven starts.