LaFleur: Rodgers to play ‘a quarter or so’ against Ravens 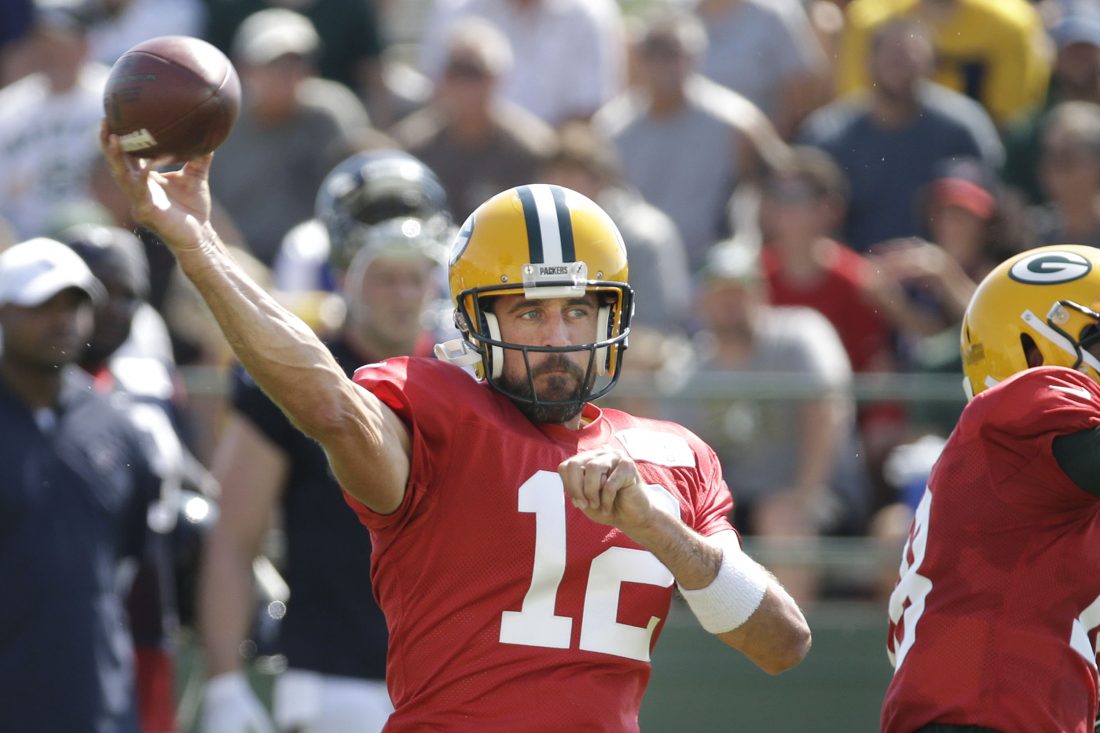 GREEN BAY, Wis. (AP) — For the first time this preseason, the world will have the opportunity to see what Aaron Rodgers looks like in Matt LaFleur’s offense.

The Packers’ first-year coach said Tuesday that Rodgers and the rest of the first-team offense and first-team defense will play for about “a quarter or so” on Thursday when Green Bay heads to Baltimore to face the Ravens in their second preseason game.

“We’re always fluid with that, dependent upon how the game goes and how much time they have,” LaFleur said. “But everybody should be prepared to play about a quarter or so.”

Thursday will be Rodgers’ preseason debut after the 15th-year pro watched the entire preseason opener against the Texans last week from the sideline in warmups while listening to the offensive communications on his headset.

Rodgers said he wants to make sure he stays healthy and plays efficient football on Thursday night.

“It will be a good test for our first time running this offense in another stadium, on the road, against a really good defense,” he said.

“We have a great line of communication,” he said. “But I’m not sitting up here wishing people — ‘I wish you just knew this’ — I don’t care. Look, I don’t need to go out and prove to anybody how great Matt and I are getting along, or him stand up there and say how great it’s been. Look, we’re having a great time, we’re communicating, and the conjecture is for clickbait news stories you guys can put on your websites.”

Rodgers said the dialogue between him and LaFleur has been great because Rodgers knows who’s the boss — LaFleur.

LaFleur said Rodgers’ backfield mate, running back Aaron Jones, will not play. Jones, who led the team with 728 yards on the ground last season, participated in his first team (11-on-11) period on Tuesday after missing six practices and the preseason opener because of a hamstring issue.

“I wouldn’t even call it an injury; it was just tight,” Jones said.

The defense will be without outside linebacker Oren Burks indefinitely. Burks said he initially thought he would need to undergo season-ending surgery to repair a pectoral muscle he injured last week against the Texans. Burks said a specialist determined that it would heal on its own.

“I’m really hoping that Oren’s thing is going to be really short term and we’ll get him back here quicker,” Packers general manager Brian Gutekunst. “Right now, I’d just kind of like to get through this next game, kind of see where we’re at, see where Oren’s at.”

Burks said he’s day to day and there is no timetable for his return.

NOTES: CB Kevin King, whose 2018 campaign was ended by a hamstring injury, continues to be sidelined with yet another hurt hamstring. King hasn’t practiced since suffering the injury in the team’s scrimmage Aug. 2. … Rodgers and TE Jimmy Graham connected on a 40-yard touchdown over S Adrian Amos on Tuesday. The score was followed by the entire offense running down to the end zone to celebrate with Graham. “He’s a Hall-of-Fame talent, and we gotta get him the opportunities so that he can reach his potential in this offense,” Rodgers said. “And I think we’re going to do it based on the schemes and the approach in getting him in some of those positions where he can be the first or second read in a progression.” … A helicopter circled and hovered over practice for several seconds on Tuesday. Both LaFleur and Rodgers said they didn’t see it. When asked about it after practice, LaFleur said: “Did the Bears send a spy?” Green Bay opens the regular season Sept. 5 at rival Chicago.