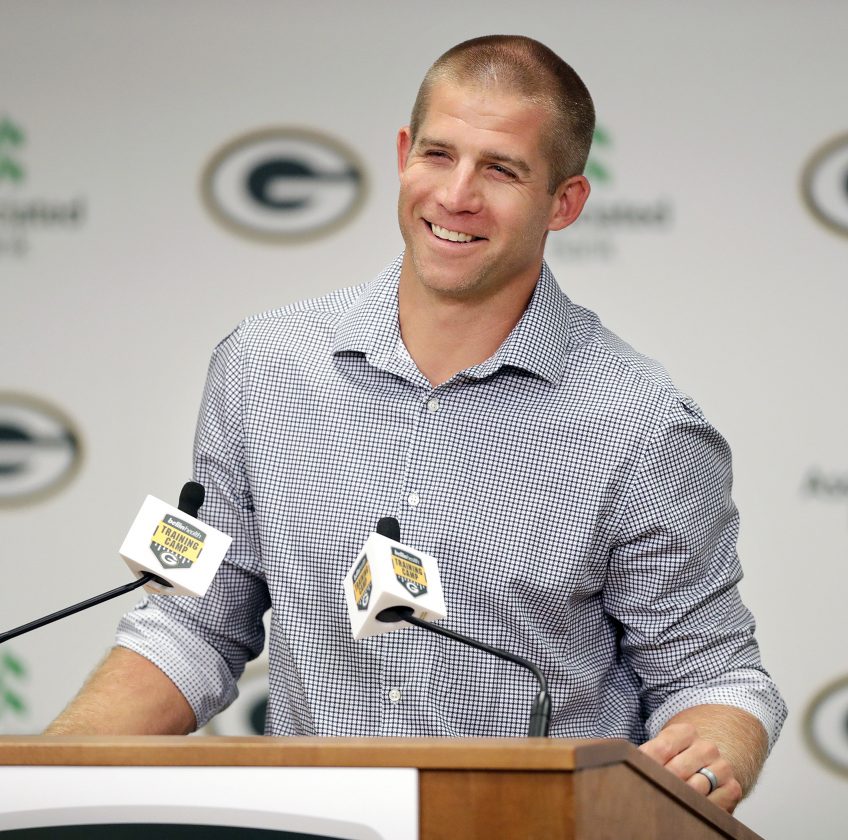 Jordy Nelson answers questions during a press conference on Tuesday, Aug. 6, 2019, at Lambeau Field in Green Bay, Wis. Nelson signed a one-day contract with the Packers on Tuesday and announced his retirement after 11 seasons, 10 of which he spent in Green Bay. (Sarah Kloepping/The Post-Crescent via AP)

Nelson signed a one-day contract with the Packers on Tuesday and announced his retirement after 11 seasons, 10 of which he spent in Green Bay.

“I’ll be remembered as a Packer,” the 34-year-old wide receiver said. “Obviously I enjoyed my year last year in Oakland. But this is where I started and it’s great to come back and end it that way.”

Nelson will be remembered for his speed, size and chemistry with quarterback Aaron Rodgers, who was the starter for Nelson’s entire tenure in Green Bay. The pair won a Super Bowl after the 2010 season, and Nelson was a big part of the 31-25 victory over the Pittsburgh Steelers, catching nine passes for 140 yards and a touchdown that he called his most cherished memory.

“To be able to be there and have that opportunity to score a touchdown there,” Nelson said. “To have that football. My son (Royal) turned 1 that week. … I still remember being down on the field with him and my wife.”

Nelson ranks third in Packers history in receptions (550), fifth in receiving yards (7,848), second in touchdown catches (69) and third in 100-yard receiving games (25). He is the only player in franchise history to record three seasons with 13-plus touchdown receptions. Nelson and Sterling Sharpe are the only Packers players to have three straight seasons with 85 catches or more.

“When him and Aaron really started getting on the whole back-shoulder thing, it was just kind of an unstoppable thing,” Packers general manager Brian Gutekunst said. “They kind of would toy with opponents.”

The Packers drafted Nelson in the second round in 2008 out of Kansas State. He emerged as Rodgers’ favorite target in the 2011 season following that Super Bowl triumph, with 15 touchdown catches on a team that went 15-1.

“For me, keeping it simple is what did it,” he said. “There wasn’t much extra stuff. Even in my last year (in Green Bay) when guys tried to convince me to celebrate, it was awkward.”

Nelson missed the 2015 season with a torn ACL. He returned in 2016 and had 97 catches for 1,257 yards and a league-best 14 touchdowns, earning Comeback Player of the Year honors.

But he struggled in 2017, when Rodgers was limited to seven games because of injury, and the Packers released him in the offseason.

Nelson said there were teams interested in his services this season. He even visited with the Seahawks. But he said he didn’t want to move his family around the country to extend his career, and he said getting his body ready for game day was becoming more difficult.

Instead, he’ll return to his home state of Kansas with his wife, Emily, and their three children. He plans to build a new house and has been helping his brother on the family farm.

“We enjoyed it to the fullest,” Nelson said. “Made a lot of friendships, a lot of memories. My family’s enjoyed it. It’s been good.”