Packers hold on for 28-26 win over Texans 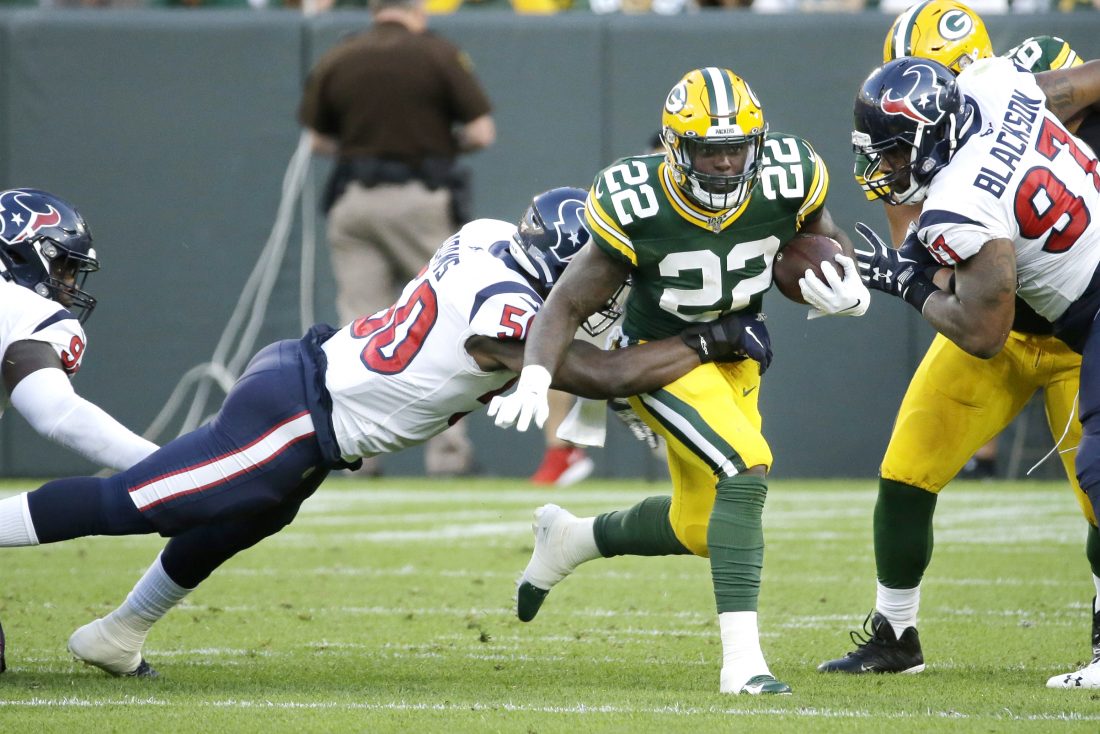 GREEN BAY, Wis. (AP) — Matt LaFleur walked out of the tunnel Thursday at Lambeau Field and couldn’t help but to take a minute to reflect.

At just 39 years old, he was the head coach of the Green Bay Packers.

“There was just a brief period of time when I looked up and you just see all the greats written all, in Lambeau,” he said. “It’s a pretty cool moment. It’s something I’ll never forget.”

DeShone Kizer was 8 for 13 with 102 yards and a touchdown and the Packers topped the Houston Texans 28-26 in the preseason opener for both teams and the first game for LaFleur as head coach.

“I told the guys, ‘Whether it’s regular season or preseason, it always feels much better to win than lose,’ so I was happy about that. And more than anything else, I thought our guys gave great effort.”

Tim Boyle added two second-half touchdown passes for the Packers as Aaron Rodgers had the night off.

Rodgers, though, was on a headset all night, something LaFleur thought was helpful for the two-time MVP as he continues to get comfortable with the offense and the communication within it.

“I think, more or less, again, the communication between myself and the quarterbacks,” LaFleur said. “You could see when we’re at practice sometimes, I don’t know if we’re playing the music too loud or what, but they’re having a hard time hearing me with Walkie Talkies. They said tonight was crystal clear.”

With Deshaun Watson not playing and A.J. McCarron sidelined with a thumb injury on his right throwing hand, Joe Webb, the only other quarterback on the Texans’ roster, played the entire game. The 10th-year veteran was 25 for 40 for 286 yards a touchdown and two interceptions.

“Joe competed hard,” Houston coach Bill O’Brien said. “Joe’s really what we’re really looking for in a Houston Texan. He’s a smart, tough, dependable guy. He doesn’t get a whole lot of reps at quarterback and he went in there and competed hard.”

Packers receiver Equanimeous St. Brown recovered a fumbled punt in the end zone for a 7-0 lead in the first quarter.

After the Texans tied it, Kizer threw a TD pass to Darrius Shepherd to give the Packers a 14-7 lead. Ka’imi Fairbairn’s 49-yard field goal made it 14-10 at the half.

Boyle added TD passes to J’Mon Moore and Allen Lazard in the third quarter to give the Packers a 28-10 lead.

“More than anything else was the command,” said LaFleur of what he liked most about the play of Kizer and Boyle. “That’s what we’re looking for. I thought they commanded the huddle. It seemed to me that the communication was on point. … I just thought the operation was clean.”

The Texans rallied with 16 points in the fourth quarter, but fell short.

“I thought the guys played hard,” O’Brien said. “We were in the game right till the end. Guys were fighting, battling, trying to keep us in the game, and I think that’s good to see.”

Defensive tackle Montravius Adams, linebacker Oren Burks and safety Darnell Savage Jr. were the only defensive first-team players who dressed for the Packers, who rested 26 players.

Defensive end J.J. Watt’s tradition of playing catch with kids in the stands before games was a little more special as the Wisconsin native did it at Lambeau Field.

This time he was also able to play catch with his dad.

“It was obviously a really cool experience,” he said. “I mean, we used to play catch in the backyard and pretend you’re Brett Favre. So, to be able to play catch at Lambeau with my dad on the field, it’s pretty cool.”

Watt, who has typically sat out the first preseason game, did not play after tweaking his groin in practice earlier in the weak for the Texans.

Watt, who was the last player out of the tunnel for the Texans, soaked up the applause from the Green Bay crowd and participated in the coin toss.

Green Bay native Max Scharping got in on Houston’s first offensive drive. The rookie offensive tackle was selected by the Texans in the second round out of Northern Illinois.

Texans wide receiver Keke Coutee carted off the field in the first quarter with a leg injury.

Packers linebacker Oren Burks suffered an apparent injury to his right shoulder on the first series. He had an ice bag on the shoulder and did not return.

Houston acquired running back Duke Johnson in a trade with the Browns. Johnson rushed for 201 yards on 40 carries and had 47 catches for 429 yards and three touchdowns last season with Cleveland. Johnson has to pass to physical to complete the trade. The Texans also signed rookie QB Jordan Ta’amu and waived C D.J. Coker.

The Texans play host to Lions on Aug. 17.

The Packers at Baltimore to face Ravens on Thursday night.