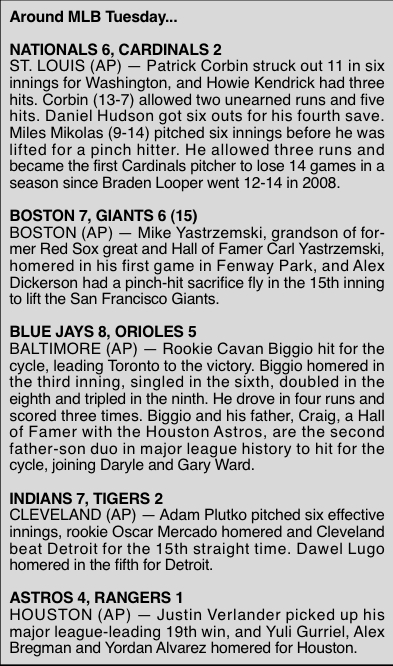 CHICAGO (AP) — The Chicago Cubs had been scoring in bunches lately.

Then Sonny Gray took the mound for the Cincinnati Reds.

The Cubs were shut down by Gray and two relievers Tuesday night, falling 4-2 to the Reds in a loss that hurt their playoff positioning.

Chicago had won five in a row, outscoring its opponents 59-18 during the stretch. But it managed just two runs against Gray (11-7) before Michael Lorenzen and Raisel Iglesias closed out the five-hitter for Cincinnati.

Rookie Aristides Aquino hit his 16th homer for Cincinnati (71-81), and Joey Votto and Eugenio Su·rez each drove in a run.

Gray struck out nine in 6 2/3 innings. The All-Star right-hander improved to 5-1 with a 1.46 ERA in his last nine outings

“I felt pretty good out there today after I kind of got going,” Gray said.

Yu Darvish (6-7) struck out 13 in seven innings for Chicago, but was hurt by a slow start. Kyle Schwarber had three hits and two RBIs.

“Yu is on quite a run right now, but unfortunately their guy is really good, too,” Cubs manager Joe Maddon said. “In spite of us swinging the bats well lately, Sonny did a nice job also.”