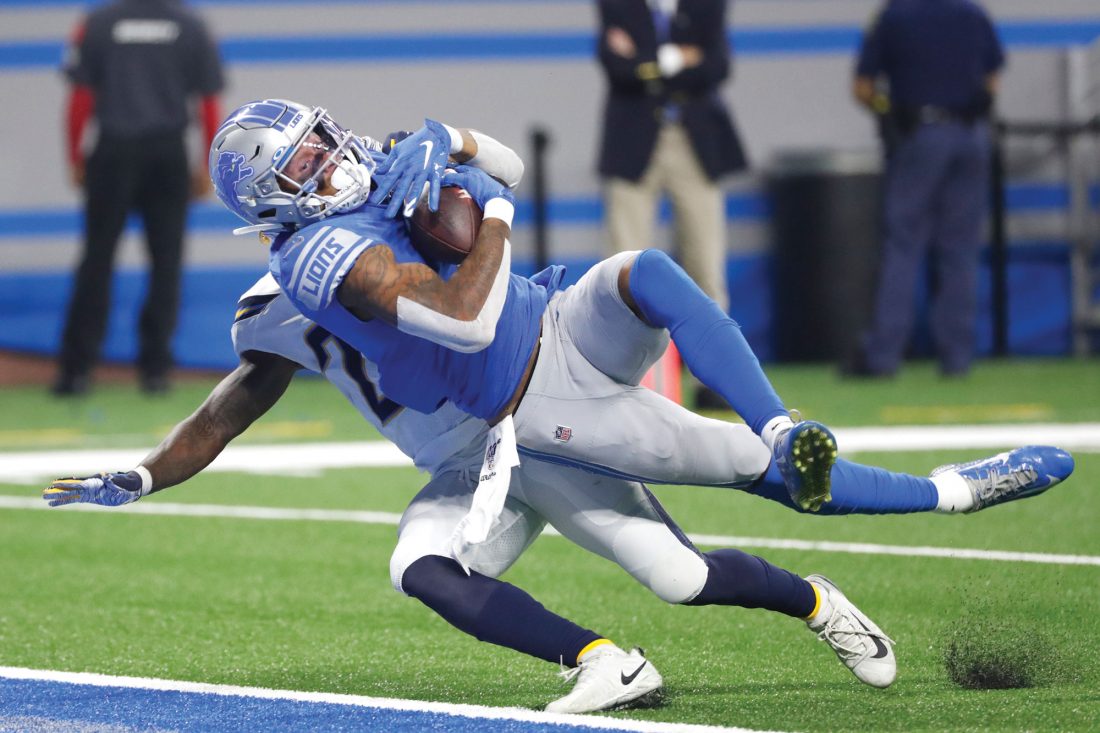 DETROIT (AP) — Matthew Stafford threw a go-ahead, 31-yard touchdown pass to Kenny Golladay midway through the fourth quarter and Darius Slay made an interception in the end zone with 1:03 left, allowing the Detroit Lions to beat the Los Angeles Chargers 13-10 Sunday despite a slew of mistakes.

Detroit (1-0-1) overcame Stafford’s two interceptions, Slay giving up a lot of receptions and Matt Prater missing an extra point and a field goal.

The Chargers (1-1) were in a position to attempt a 45-yard field goal to tie the game, but Philip Rivers tried to force a pass to Keenan Allen and Slay picked it off.

Austin Ekeler leaped over the goal line for a 1-yard TD on the Chargers’ second drive. Ekeler finished with 67 yards receiving and 66 yards rushing for his second straight game with 100-plus yards from scrimmage.

Detroit scored a TD on the ensuing possession with a screen pass that Kerryon Johnson bobbled before securing and sprinting for a 36-yard reception, but Prater muted some of the cheers by missing an extra point to the left. Prater also missed a 40-yard field goal to the right in the second quarter.

Stafford threw a long pass up for grabs in the end zone early in the third quarter and cornerback Casey Hayward came down with it. Stafford had thrown 181 passes without an interception, which was the NFL’s longest active streak.

The Chargers had two TDs negated by flags on the next drive and a penalty by Detroit gave Los Angeles the ball at the 1. Ekeler tried to dive into the end zone again for a score, but rookie Jahlani Tavai forced him to fumble and linebacker Devon Kennard recovered it.

Los Angeles got in position to score again in the third, but Long missed a 39-yard field goal by hitting the left upright. The punter was filling in for kicker Michael Badgley, who missed a second straight game with a groin injury.

Stafford helped the Chargers keep their lead on the next possession, trying to force a deep pass to Marvin Jones and getting it easily picked off by safety Rayshawn Jenkins.

Los Angeles opted to attempt a 41-yard kick instead of going for it on fourth-and-1 at the Detroit 23 and Long couldn’t convert on the field goal.

Detroit coach Matt Patricia chose to pass, instead of kick, on a fourth-and-1 on the ensuing drive and Stafford converted on a pass to Jones to set up his go-ahead throw to Golladay on the next snap.