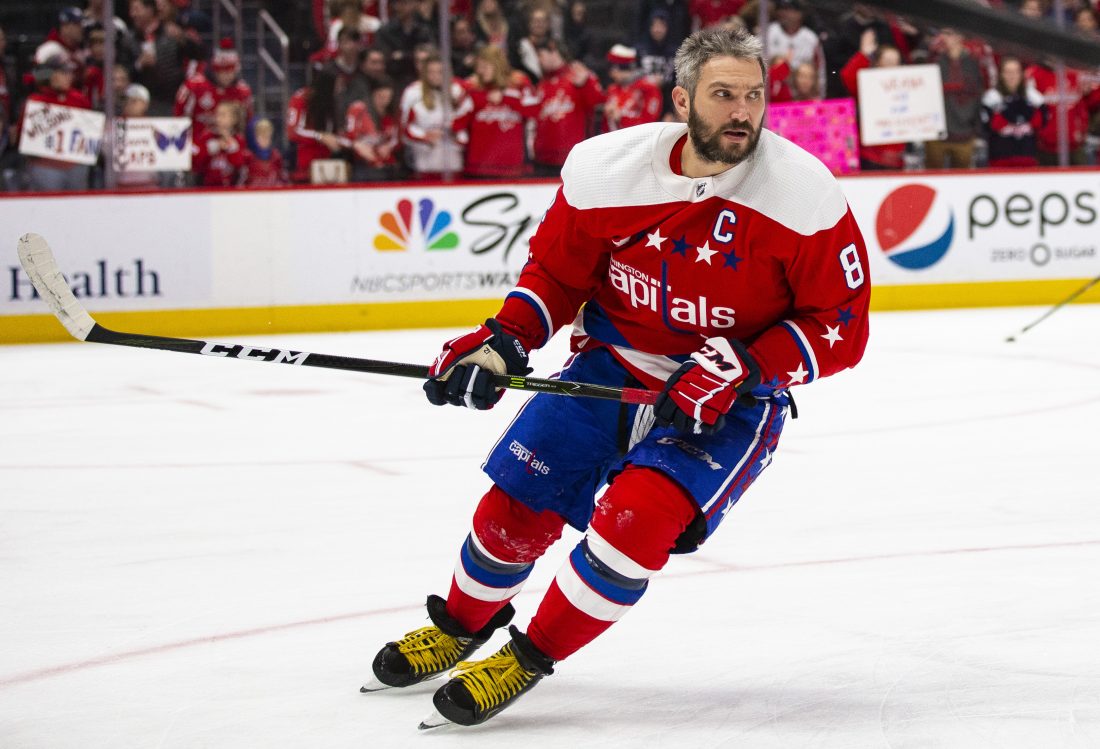 AP Photo Washington’s Alex Ovechkin (8), from Russia, skates during warmups before a game against the New Jersey Devils, Thursday.

WASHINGTON (AP) — Alex Ovechkin took a stick to the face and put three pucks in the net for a hat trick to lead the Washington Capitals past the New Jersey Devils 5-2 on Thursday night.

Ovechkin reached 31 goals this season with his 25th career hat trick. He has scored five in his past two games to reach 689 total, one back of Mario Lemieux for 10th on the NHL’s all-time list as he approaches 700. Mike Gartner is the only other player to reach the 30-goal mark in each of his first 15 seasons.

Carl Hagelin and Jakub Vrana also scored for Washington, which has won two in a row since a 5-1 drubbing at the hands of the Devils five days earlier. Washington rookie Ilya Samsonov stopped 32 of the 34 shots he faced to win his ninth consecutive start.

Ovechkin took an errant high stick from New Jersey’s Miles Wood that made him bleed from the mouth early in the game. Fired up, Ovechkin scored twice on Louis Domingue before the Devils starter exited after the first period with a lower-body injury. The Capitals put up three more on Cory Schneider, who was making his second relief appearance in as many games.

OTTAWA, Ontario (AP) — Mark Stone scored a goal and picked up an assist in his return to Ottawa, leading Vegas past the Senators in Peter DeBoer’s debut as the Golden Knights’ coach.

The win snapped a four-game losing streak for the Knights, who fired Gerard Gallant on Wednesday.

UNIONDALE, N.Y. (AP) — Chris Kreider scored a power-play goal with 25 seconds left to give the Rangers the victory.

With the Islanders’ Derick Brassard off for cross-checking earlier in the final minute, Kreider was at the right side of the net and knocked in the rebound of Mika Zibanejad’s shot to give the Rangers their fourth win in five games.

DENVER (AP) — Philipp Grubauer made 27 saves for his first shutout of the season and the Colorado Avalanche got goals from four different players in a win over San Jose.

Sidney Crosby scored for the Penguins just 24 seconds into the game, but Jaroslav Halak shut out Pittsburgh the rest of the way.

Tomas Tatar scored his 17th goal of the season and Artturi Lehkonen added his 11th for the Canadiens, who find themselves six points behind Philadelphia for the second wild-card spot in the Eastern Conference.

COLUMBUS, Ohio (AP) — Nick Foligno scored the tiebreaking goal with 1:41 left in the game, Elvis Merzlikins had 32 saves and the Blue Jackets edged the Carolina Hurricanes.

Foligno grabbed the loose puck in the slot and fired it past Petr Mrazek’s glove for his first goal in 23 games.

TORONTO (AP) — Matthew Tkachuk scored the only goal of the shootout, leading Calgary to the win.

Derek Ryan scored in regulation for the Flames, who got 35 saves from David Rittich through 65 minutes. Rittich stopped Jason Spezza, Auston Matthews and Mitch Marner in the shootout.

William Nylander tied it in the third period for Toronto. Frederik Andersen, who had given up 14 goals over his last four starts, stopped 31 shots. But, Tkachuk beat Andersen between the pads on Calgary’s second attempt of the shootout to win it.

NASHVILLE, Tenn. (AP) — Rickard Rakell had a goal and an assist, and John Gibson made 33 saves in Anaheim’s victory.

DALLAS (AP) — Rasmus Dahlin scored a tiebreaking goal in the second period, and Linus Ullmark made 28 saves to lead Buffalo to its season-best third straight win.

VANCOUVER, British Columbia (AP) — Jake Virtanen scored the go-ahead goal midway through the second period and Jacob Markstrom made 34 saves to lead the Canucks. Bo Horvat also scored and Tanner Pearson had an empty-net goal for the Canucks.