In this July 8, 2015, file photo, actor Bill Murray celebrates as his final putt drops in on the 18th hole during the John Deere Classic Pro-Am, in Silvis, Ill.

From left are file photos showing Chevy Chase in 1986, Rodney Dangerfield in 2002 and Ted Knight in 1981. “Caddyshack,” the film that sparked countless oft-repeated quotes, most of them made up on the fly by comic geniuses and movie headliners Bill Murray, Chase, Dangerfield and Knight, has been out for 40 years and hasn’t lost one bit of its popularity. Caddyshack was selected as the No. 4 — fore? — film in The Associated Press’ list of all-time top sports movies. (AP photos) 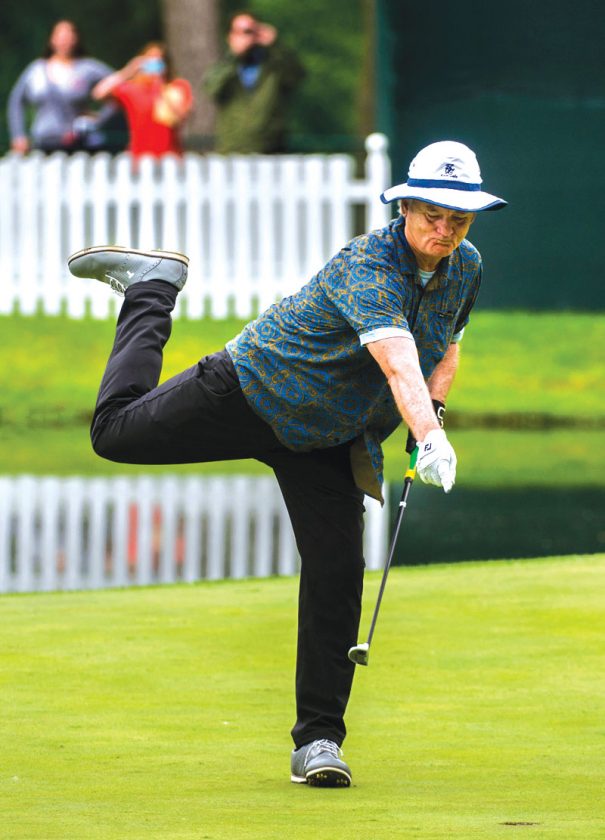 In this July 8, 2015, file photo, actor Bill Murray celebrates as his final putt drops in on the 18th hole during the John Deere Classic Pro-Am, in Silvis, Ill.

DAVIE, Fla. (AP) –It happens all the time. Someone will pull up to the big metal gate in front of the clubhouse, press the intercom button and ask to see Bushwood Country Club. Or they’ll start dancing on the 12th fairway. Or they’ll inquire if the striped fedora for sale in the pro shop comes with a complimentary bowl of soup.

The film that sparked countless oft-repeated quotes, most of them made up on the fly by comic geniuses Bill Murray, Chevy Chase, Rodney Dangerfield and Ted Knight, has been out for 40 years and hasn’t lost one bit of its popularity. “Caddyshack” was selected as the No. 4 –fore? –î film in The Associated Press’ list of all-time top sports movies.

“As a kid, I lived and died by that movie,” said Ryan Sundberg, now the director of golf at Grande Oaks Golf Club. “To be the pro at Bushwood, I think it’s pretty awesome. All my friends think it’s really cool. Once people learn about it, they think it’s the greatest thing ever.”

Grande Oaks, a private club in Davie, Florida, is the course where “Caddyshack” was filmed in 1979; hence, Sundberg gets to say that he’s the pro at Bushwood.

From left are file photos showing Chevy Chase in 1986, Rodney Dangerfield in 2002 and Ted Knight in 1981. "Caddyshack," the film that sparked countless oft-repeated quotes, most of them made up on the fly by comic geniuses and movie headliners Bill Murray, Chase, Dangerfield and Knight, has been out for 40 years and hasn’t lost one bit of its popularity. Caddyshack was selected as the No. 4 — fore? — film in The Associated Press’ list of all-time top sports movies. (AP photos)

The club embraces its place in film history and there are more than a few reminders of “Caddyshack” there –î the hat that Knight’s character, Judge Elihu Smails, was wearing when it was mocked by Dangerfield’s loud-mouthed character Al Czervik, who once cranked up a stereo in his golf bag for a little dancing during play on the 12th fairway –î is for sale.

“You buy a hat like this, I bet you get a free bowl of soup, huh?” Czervik says as he sees the hat, then turns to see it atop Smails’ head.

Smails sneers a bit, then Czervik says, “Oh, looks good on you though.”

“The star power … it was magical, it was funny and the movie lives on,” said Bill Archambault, an extra who appeared in 17 scenes.

Grande Oaks markets itself as the “home of Caddyshack,” and the infamous gopher that tormented the course is now depicted in a head cover that remains wildly popular. And plenty of golfers know probably every line of the movie ‚Äî ones that even PGA Tour players hear from galleries from time to time.

At the Phoenix Open in 2002, Chris DiMarco was standing over a 3-footer when someone yelled “Noonan!” from the gallery. It was a reference to what onlookers were shouting to disrupt caddie Danny Noonan, played by Michael O’Keefe, in the movie as he tried to make a putt to win the caddie tournament. Noonan made the putt and won. DiMarco did the same thing.

Same goes for Justin Thomas at the BMW Championship last year. On his way to winning that event, he put his ball down for a putt and heard someone yell “Noonan.”

“I was like, “Man, does this guy hate me?’ I just was terrified that he was going to do something,” Thomas said. “Luckily, he didn’t, and I made it. So, obviously I was in a great state of mind on that putt.”

Even Tiger Woods has embraced it, making a commercial for American Express years ago modeled after how greenskeeper Carl Spackler –î played by Murray –î resorted to using plastic explosives with hopes of ridding Bushwood of gophers. The gophers survived; all the bombs did was blow up some of the course, and no, the course’s owners in 1979 were not pleased that a fireball was set off on their property. A pilot approaching nearby Fort Lauderdale-Hollywood International Airport reported that he thought a plane had crashed when he saw the enormous flames.

Murray and his five brothers are in the Caddie Hall of Fame. They grew up working at a private club near Chicago, part of the inspiration for the story that became “Caddyshack.”

“‘Caddyshack’ was a great thing,” Murray said. “There were some extraordinary people in it.”

It was Cindy Morgan’s film debut and her favorite scene wasn’t even supposed to be a scene. She thought she and Chase were just goofing off as they sat together at a piano, under the auspices of him singing her a made-up love song.

And then she saw the camera was rolling. Turns out, it wasn’t Morgan and Chase sitting there. It was Lacey Underall and Ty Webb, the characters they were playing, her not even knowing that one of the movie’s many iconic moments was happening.

“If you watch that scene again, you can see just about exactly where I realized that we’re filming the scene. I didn’t know,” Morgan said. “There was no script, there was no rehearsal, there wasn’t even a discussion. But we start, and out of the corner of my right eye I see the damn camera light on.”

Morgan happened to have a mouthful of gum at the time. She blew a bubble, a little act of defiance because nobody told her she was creating a scene. They left it in the movie.

Morgan said one of the best compliments she ever got was at an autograph signing when a fan asked her to sign for himself, his son and his father. To her, there was no better evidence that “Caddyshack” is a generational masterpiece.

“Some of the most remarkable emails and letters I’ve gotten are from people in the military, first responders,” Morgan said. “I got a letter from a commander who said he shows ‘Caddyshack’ once a week for his guys, because he wants them to know when they’re in a place with no hope there’s something like this waiting for them back home.”

It was the Animal House story for golf, a mix of partying and sex and hijinks, set in a different time that still holds up.

Morgan has a theory as to why.

“It was one of the first R-rated VHS tapes to be released,” Morgan said. “And it was in every father’s library.”

As Murray said when his character was destroying some flowers with a grass whip in front of the clubhouse as he pretended to be winning the Masters, it has become a Cinderella story.