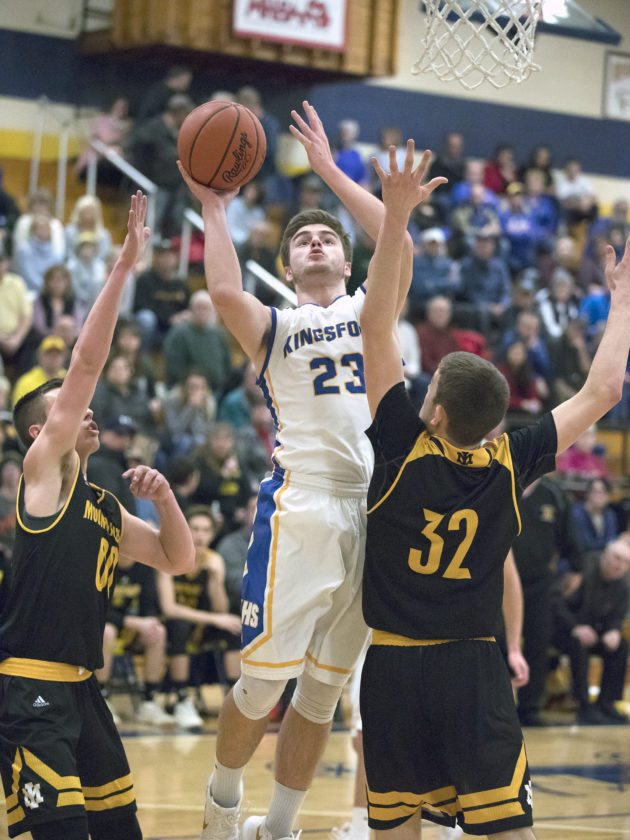 IRON MOUNTAIN — Again, critical free-throw shooting in the fourth quarter by Iron Mountain was enough to avoid its first loss of the season.

Iron Mountain was ahead by three with a minute to go when Kingsford (7-8) fouled a few times to force Iron Mountain’s hand at the line. Charlie Gerhard and Marcus Johnson made a combined 5 of 6 free throws to seal the win.

“We extended our lead to nine, maybe a seven a couple times. Kingsford came back and answered. We were able to hold them off at the end,” Iron Mountain head coach Bucky Johnson said. “Kingsford’s a big team. They have a force inside. I just thought again we didn’t play our best. Credit Kingsford. We just got to play a bit better. I think if we hit some of our open shots it would’ve been a different story. Sometimes the ball doesn’t go in the basket and sometimes it does.”

Kingsford started a big lineup and focused its defensive effort in the paint. As a result, Iron Mountain put up 21 3-point attempts, making eight of them. Johnson hit seven triples and led the Mountaineers with 34 points.

The loss spelled Kingsford’s fifth in a row. The Flivvers’ last win came Jan. 25 at Marquette.

“Fifth loss in a row kind of hurts. You go through and prepare, play hard and do what you can and come up short all the time,” Kingsford head coach Dan Olkkonen said. “I know we have good players. We do a pretty good job on a lot of things. Thing is we’re running into these top-five teams everywhere. Iron Mountain was really good.”

Kingsford held close with the Mountaineers as the Flivvers’ tall lineup mostly shut down the paint. Iron Mountain never held a lead bigger than 10 points, a notable difference from the Mountaineers’ 60-45 win on Jan. 16. Then again, Kingsford was struck with the flu then. Olkkonen said the team had an emphasis to dictate the rhythm Tuesday.

“We never got in rhythm. I don’t know, not so much played scared, but we were kind of on our heels taking it from them,” Olkkonen said of the Jan. 16 loss. “That was kind of our preparation and focus for tonight is we always have to be on the offensive whether you’re on offense or defense. We want to try and dictate what they’re going to do. I think for us we still have some points left out in the gym that we didn’t get. I think we probably had five or six layups that we needed to go that didn’t. We missed six free throws and lose by nine down the stretch, that’s not a good thing. Being able to make those free throws is important too.”

Johnson said Kingsford’s size around the basket impacted his offense.

“We only had 23 two-point attempts. We usually get more than that, a lot more. We didn’t have a lot of offensive possessions,” Johnson said. “Guys hit some critical shots at critical times. We made a nice little run right before the half. Even though it was only a seven-, eight-point lead, we were able to make most of our free throws at the end.”