No tie this time for IM-K wrestlers 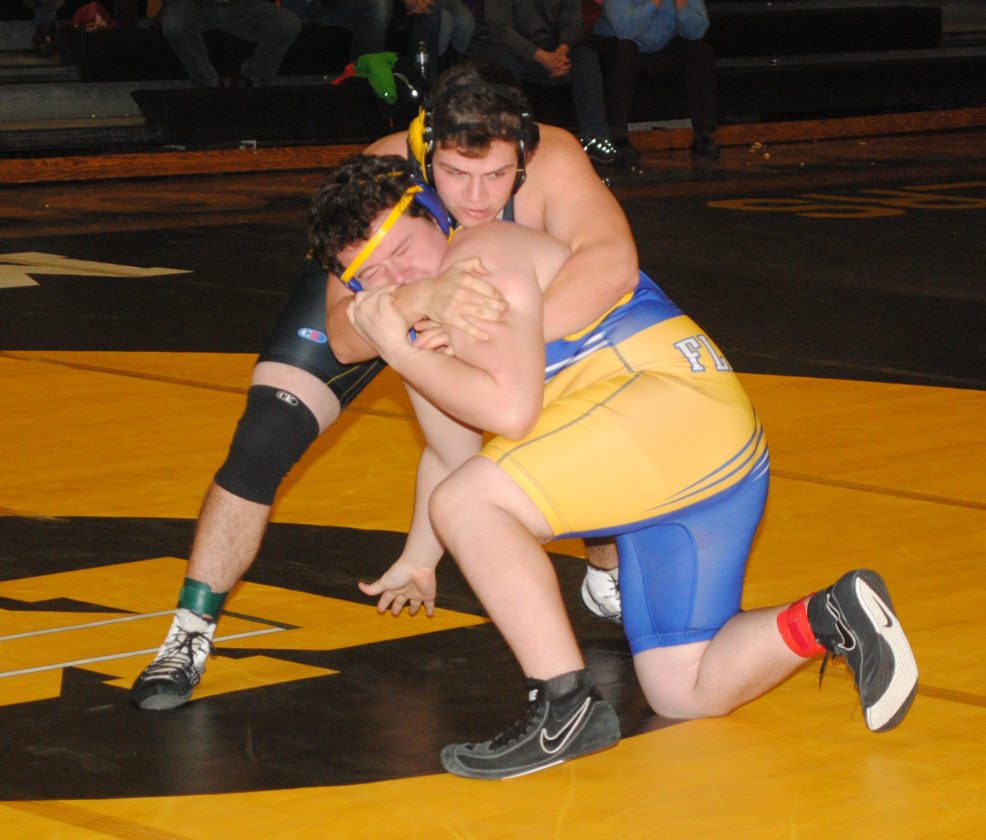 IRON MOUNTAIN — Iron Mountain and Kingsford needed the ninth criteria to settle a draw from December.

The Mountaineers won a pair of pivotal matches in the upper weights and defeated the Flivvers 39-24 for a third straight district title.

“Every time I ran the numbers we had it coming out as a tie just like we did early in the year,” said McLaren, whose Mountaineers lost that December match based on near falls. “We needed some help. We needed some strategy.”

What they got was junior Thomas Armbrust moving up to heavyweight and outlasting UP champion Eddie Cardew 13-9.

“The heavyweight match was the key,” said McLaren, indicating this was a first-time meeting this season.

With Cardew pinning Jordan Tramontine in December, the Mountaineers flipped Armbrust and Tramontine.

“Eddie Cardew is a good wrestler,” said McLaren, noting that Armbrust’s style works better against the Flivver sophomore. “Thomas is strong and he gave us chance to swing the points from losing six to winning three. That’s huge.”

Flivvers coach Darren Groleau said Cardew had been out with an illness.

“Eddie’s been off the mat and it showed,” said Groleau.

Despite the rustiness, Cardew scored the last five points and threatened for a pin when the match ended.

In another key match at 189, Iron Mountain freshman Caleb Burklund, a UP champion from Norway, pinned Kalvin Nichols in the first period.

“We lost in the upper weights where I thought we would be competitive in,” said Groleau. “Those are two swing matches that I definitely had in our favor.

“Congrats to Iron Mountain on a great win. They wrestled good. They deserved it.”

Cardew and Nichols had pins in Kingsford’s 40-12 semifinal win over Negaunee.

The Mountaineers (8-8 dual record this season), who will host the regional next week, built a 39-6 advantage after Armbrust’s win. The Flivvers closed with pins from August Early (119) and Ethan Wilcox (125).

An injury and missed weight left the Flivvers (10-6) with seven wrestlers for the district.

“For the small number of kids that we had, I’m proud of the accomplishments this season,” said Groleau, citing top five tournament performances. “Coming in here we didn’t meet our expectations but overall I’m still happy with what we did. We had a great season overall as a team.”

Iron Mountain turned back Menominee 34-28 in the other semifinal Wednesday. Mountaineers’ Burklund (189), CJ Bolo (171) and Jon Carrion (145) had pins while Jacob Carlson (140) recorded a major decision. Menominee’s points came on a Seth Smith (160) pin plus tech falls from Tyler Heusinger (119) and Kaeleb Crawford (125).

In Kingsford’s semifinal with Negaunee, Ethan Wilcox (125) had a major decision. Negaunee’s 12 points came on forfeit wins from Cody Niskanen (140) and Dallas Hall (215).

Iron Mountain and Kingsford will now turn their attention to the MHSAA Division 4 individual district Saturday in Grayling.