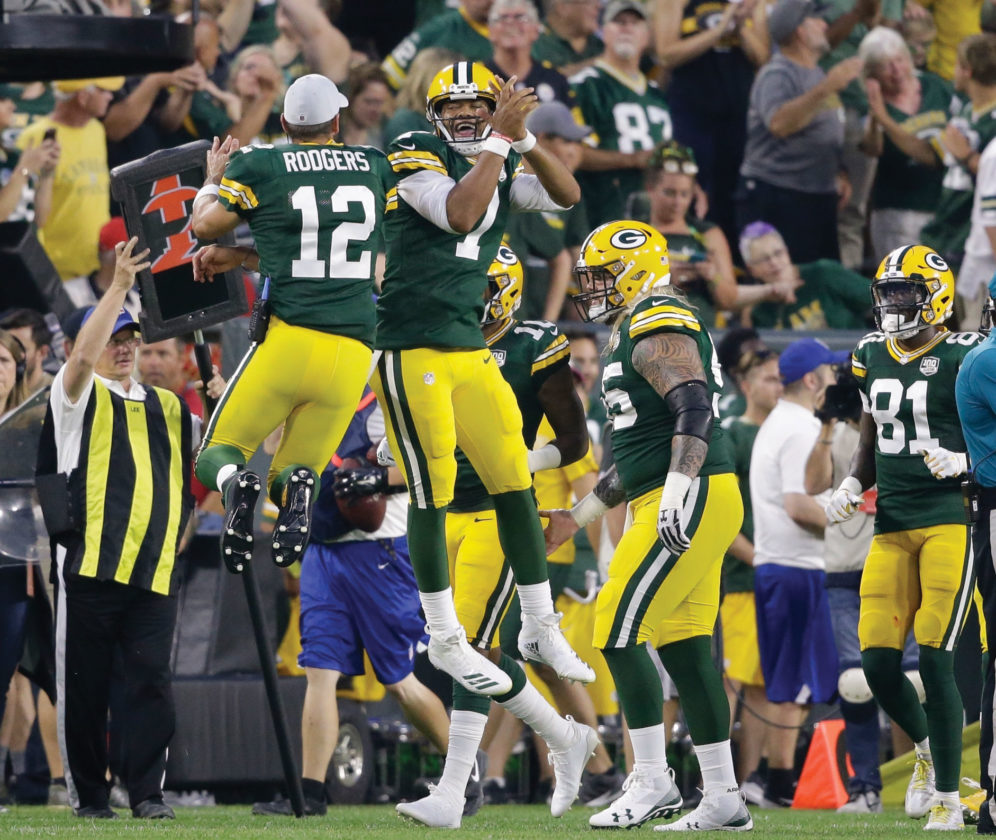 The Green Bay Packers fans showed their appreciation with the two-time NFL MVP about to take his first snaps at Lambeau Field in almost a year. Once he got behind center, Rodgers needed just one drive to look right at home back in Titletown.

Rodgers connected with tight end Jimmy Graham for an 8-yard score, and Tramon Williams had a 25-yard interception return for a touchdown on the first play from scrimmage of the Packers’ 51-34 win over the Pittsburgh Steelers on Thursday night.

“The biggest thing, the goal tonight with Aaron in that first drive was to get the ball in the end zone,” coach Mike McCarthy said. “And I thought we did a nice job.”

The response from fans seemed just as meaningful to Rodgers.

He was 2 of 4 for 35 yards in his first game at Lambeau since Sept. 28. He broke his collarbone two weeks later at Minnesota, an injury that doomed the Packers in a 7-9 season.

“To be back at Lambeau was a thrill and the ovation touched me,” Rodgers said. “I have to kind of wipe away some tears in my eyes.”

Starting quarterback Ben Roethlisberger watched from the sideline in shorts and a T-shirt. He and second-stringer Landry Jones had already been ruled out for the game when Roethlisberger left a training camp practice on Tuesday with a possible concussion.

Big Ben looked just fine while chatting with Rodgers as they walked to their respective locker rooms at halftime. After the game, Steelers coach Mike Tomlin said Roethlisberger was out of the concussion protocol.

“He’s out of the protocol. He’s a full participant,” Tomlin said.

GOING TO GRAHAM– Green Bay is always a threat in the NFC as long as Rodgers is healthy. This year, he has an intriguing option in the red zone in the 6-foot-7 Graham, who signed as a free agent in the offseason.

Rodgers drew the Steelers offside on third-and-10 from the 13 for a 5-yard penalty.

On the next play, he stood tall in the face of a rush before throwing a high pass into the middle of the end zone for Graham.

STAT LINES — Second-string quarterback Brett Hundley was 6 of 9 for 77 yards. He also scored on a 10-yard run . Third-stringer DeShone Kizer connected with receiver Jake Kumerow for an 82-yard touchdown pass in the third quarter.

UP NEXT — Packers: Visit the Oakland Raiders on Aug. 24.

In his first action since losing in the NFL title game to Philadelphia, Brady completed 19 of 26 passes for 172 yards and two touchdowns on Thursday night to help stake New England (2-0) to a 27-7 halftime lead.

Super Bowl MVP Nick Foles left in the second quarter with a shoulder injury after a strip sack that Bentley recovered and ran 54 yards for a touchdown.