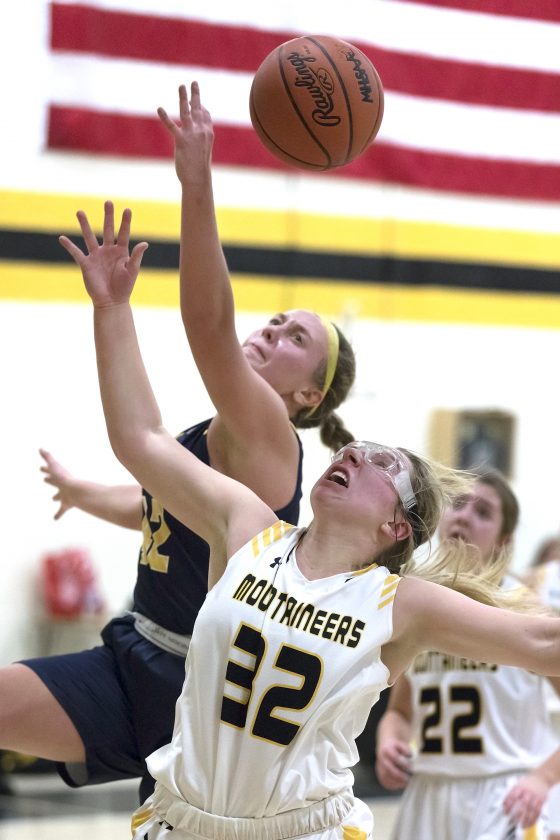 Poupore’s milestone bucket came with 6:33 left in the third quarter tightened Negaunee’s lead to 27-25. But the Mountaineers never scored for the rest of the quarter as Negaunee led by nine points going into the fourth.

Iron Mountain shot 11 for 41 on the night and 7 of 14 from the free-throw line. But the loss didn’t dampen Poupore’s accomplishment, recognized with a stoppage of play shortly after her third-quarter basket. Poupore, needing 19 going into the game for the milestone, finished with 22 points.

“I couldn’t have done it without the village around me constantly supporting me and pushing me,” Poupore said. “Tonight was about winning the game. Even though we came up short, our goal as a team was not to focus on the 19 points I had left. I let go and just played the game I love. I’m in shock and overwhelmed and so thankful. I wouldn’t have gotten it without my teammates.”

For the Miners, it was a night of imperfect offense and defense, but found a way to gut it out.

“We were just really flat,” Negaunee head coach Brandon Sager said. “We were anticipating them coming out in a zone and we were ready for it. Had some good looks, but our energy just wasn’t where it needed to be. Their energy was out of this world. They had a great spark. We were able to kind of keep it close.

“If you weren’t looking at the score, I would’ve thought we were down by 10 at halftime. We were able to keep that … I think we held her to three in the second half — 12 for the whole team. We were just kind of in a funk offensively. We didn’t shoot free throws very good. We did a horrible job boxing out, which we’re going to work on for the next two days.”

“We played a great first half. We played really great defense. We were working the ball on offense, our shots were hitting,” Iron Mountain head coach Katelynn Grenier said. “We went in a little bit of an offensive lag in the second half. That definitely hurt us. All away around, that’s the second-best team in the UP and I thought we hung with them for the majority of the game. It was a great effort on our side tonight.”

“It’s definitely cool. I’ve experienced it twice in my life and it was twice this year. It was my brother (Marcus Johnson) and then Riley,” Grenier said. “It’s cool to be on the coaching end of it. I’ve been with her since last year. Coached her in a couple Little Dribblers, so we go back a little bit. It was definitely nice to see.

“We talked before the game and she said we want to win, that’s our No. 1 goal,” Grenier added. “If it comes tonight it comes, if it doesn’t it doesn’t. You can’t think about it. Just go out there and play your game and have fun. That’s what she did and it came out in her favor. That was nice to see, definitely.”

“She’s been a dynamic player in our league since she was a freshman,” he said. “She’s so strong and powerful and plays so hard. It’s great for her to accomplish that milestone. I’m very happy for her and I know she’s a great kid.”