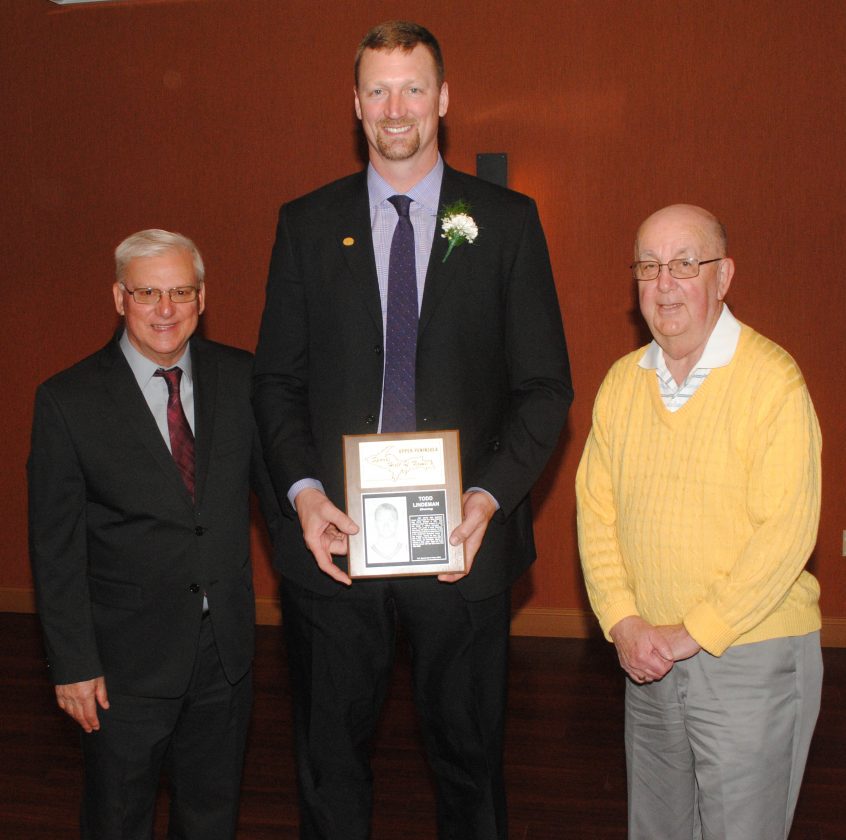 HARRIS — Chris Hofer and Todd Lindeman credited others Saturday for their induction into the UP Sports Hall of Fame.

Hofer, who led Kingsford High School football to greatness in more than 30 years at the helm, and Lindeman, a North Dickinson County School basketball great who went to a successful collegiate and professional career, were among the 10 inductees at the 48th annual ceremony held at the Island Resort and Casino.

Hofer was overwhelmed to see Kingsford administrators, coaches, former players and community members in the audience.

“It makes you feel good when you stand up here and see that,” Hofer said. “There’s a table of former players here and you can’t beat that.”

“Since I was a little kid I never had a coach who I didn’t think was a good coach,” said Hofer. “I never played for a jackass. A good coach was somebody that cared about me.

“People always have those horror stories about coaches and I don’t have any of those.”

Quipped the son of Millie and Ken Hofer, Menominee’s three-time state championship coach, “My high school coach didn’t have a choice. He had to care about me.”

Hofer, who announced his retirement from teaching and coaching recently, began his Flivver career as an assistant under Don Edens in 1987.

Hofer’s head coaching stint began in 1988, leading to four appearances in the state finals including the 1993 Class B championship. Dan Short and Andy Wiltzius served as assistants.

“When I first started you couldn’t ask for better assistant coaches,” Hofer said of the Flivvers’ state finals appearances in the 1990s. “The one constant was those guys were on the staff.

“Dan Short and Andy Wiltzius, they knew how to work with kids. They were loyal to the core. They were just great guys. I treasure the experiences I had coaching with them and the friendship in general.”

“Don probably did more for me than anybody as far as getting started in my coaching career,” Hofer said. “I will always be indebted to Don.

Hofer also recognized his children, Nicole and Joe, and their mother, Mary.

“I couldn’t be here without those three,” Hofer said. “I’m humbled to be here. This is a great event.

“You reflect on what people did for you and that’s why you’re here.”

Lindeman noticed many in the audience from the North Dickinson community that “helped in the journey to be a basketball player and person.”

The 7-foot Lindeman, who led the Nordics to a pair of state semifinals appearances in 1988 and 1991, averaged around 27 points and 18 rebounds in his senior season.

“In my mind it was just yesterday when I was dunking on Dan Olkkonen in the UP state finals, although my body definitely feels like it was 30 years ago,” said Lindeman, a two-time all-state player who drew record crowds to Nordic games. “What I look upon as the best thing that it started just up the road in the small town of Channing and small school of North Dickinson.

“Fundamentals is where it all starts and those guys did a great job,” Lindeman said. “Everybody wants to shoot threes and dunk, all that fancy stuff, but if you can’t handle the ball or handle the press it doesn’t matter.”

After a solid career at Indiana University, Lindeman’s Connecticut Pride won the 1999 CBA championship. He also played professionally in Italy, Japan, Spain and Turkey, and had NBA tryouts with four teams.

“Basketball has taken me all over the world,” Lindeman said. “I’ve traveled and lived in places that most people only see on TV or in books. I’m friends with some of the greatest players that ever put on a uniform.

“Special thanks to all of my teammates. We wouldn’t have been successful without their hard work, commitment, love of the game and unselfishness. They were a great group of guys to play with.”

He noted that the “drive and sacrifice” of his parents, James and Susan Lindeman, took him all over the country to play basketball. We didn’t have AAU or travel teams back then.”

Lindeman called it a “true honor” to be enshrined.

“I’m thankful and humbled to be in the presence of so many great players and coaches,” Lindeman said. “I’ve seen everything. I’ve done everything. It’s been a great experience. It an honor to be here tonight.”

The induction class Saturday also included Jerry Bugni of L’Anse, Fran Desarmo of Munising, Dave Duncan of Cedarville and Jeff Finger of Houghton along with the late Marmaduke (Duke) Christie of Escanaba, Joseph Linder of Hancock, Fred Lonsdorf of Houghton and Bob Olson of Hancock.

Lonsdorf, a 1940 Iron Mountain High School graduate, “breathed life into skiing at Michigan Tech University and the area,” according to his UP Sports Hall of Fame bio.

“My dad would be honored and proud,” said his daughter, Lynn Enrietti. “He had a life-long passion for all things skiing.”

Lonsdorf, who served in the Army’s famous 10th Mountain Division in World War II, held a variety of roles at Mont Ripley in Hancock. He passed away in 1996.