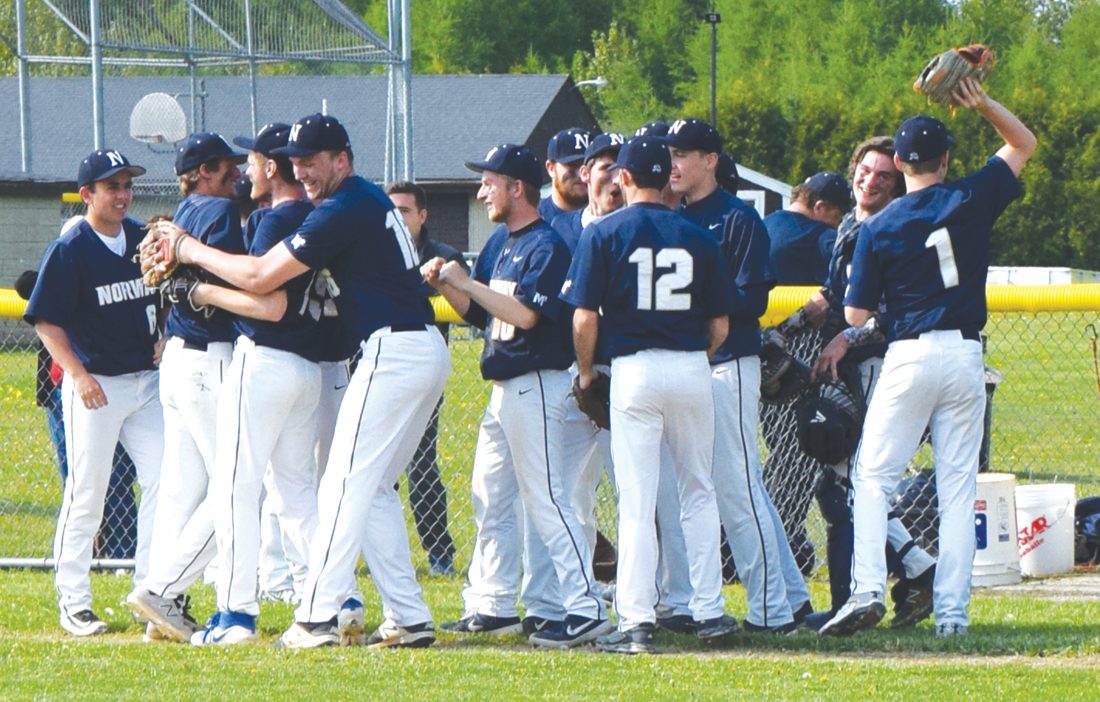 BARK RIVER — It was a game of attrition here Friday as the Norway Knights captured a Division 4 District 98 title with a 3-1 win over Bark River-Harris in the championship game.

The Broncos won against North Central 8-3 earlier in the their semifinal matchup. The Knights beat Stephenson 7-1 in the other semifinal.

Norway faces Gogebic on Wednesday in the regional semifinals.

“As a team, we’ve been successful this season, but they weren’t at a point where I thought they really solidified until two weeks ago,” Knights’ coach Randy Van Gasse said. “We started to play together as a team. People stopped worrying about themselves and started worrying about how the team was doing. I think it was the buy into the team concept that really made a huge difference, and it showed today. There’s nine or 10 guys out there, and you know if you make a mistake, there’s some guys behind you who’ve got your back.”

Aidan Johnson drove in Nick Javurek on a groundout for BR-H’s lone run in the bottom of the first.

In the fourth, a single and a double by the Knights (20-4-1) put runners on second and third. Isaac Ray grounded out to score Trevor Anderson and tie it at one. The errors soon began to pile up for Bark River (11-11), as Nolan Amundson reached on an error to score Max Hall to put the Knights ahead 2-1. Two walks loaded the bases, and Trey Doda reached on an error to score Amundson.

“It was a highly competitive ball game,” Broncos’ coach Al Botwright said. “So, the margin for error was not very great. Errors were costly for us. I think they scored all their runs in one inning. We extended the inning because of a couple errors, so they hurt. We also did some other things, and we had some at-bats that didn’t go our way.”

In the top of the seventh, the Knights loaded the bases on a walk and two errors, but the Broncos tagged out a runner at home and notched a groundout to stay in the game.

In the bottom, Bark River went down in order to finish the game.

“(The district win) means a lot,” Van Gasse said. “The last two years have been disappointing. Two years ago here we lost to Bark River, and they deserved the title. Last year we lost to Stephenson, basically to a pitcher and catcher. Particularly with my seniors, that didn’t sit well with them. They really had focused districts this year. I think we’ve really got to work on small ball. We didn’t see much of that today.”

Botwright was happy with the group he coached.

“This was a very enjoyable group of guys to coach and hang out with,” he said. “To watch them get better as the year went on, you know, that’s why most of us coach to be honest. It’s to watch young men learn and show growth and get better at the game and gain some confidence. I think there’s no better evidence of that than how we hit the ball today. We’ve had some struggles over the majority of the year making solid contact, and we hit the ball hard all day today. Somehow, I still can’t figure out how we only scored one run in the game. As hard as we were hitting it, we couldn’t get the final hit in to really break things open for us.”

Javurek took the complete game loss for the Broncos, allowing five hits, three walks and three runs (one earned) while striking out two. Johnson collected their sole RBI and one hit. Johnnie Robinette and Zach Robinette both finished with two hits, while Jackson Bower, Max Hall, Carter Zawacki and Javurek all notched one hit.

Kody Hendricks earned the win for the Knights over six innings. He fanned nine and allowed nine hits, one walk and one run. Doda pitched the last inning in relief, allowing no hits and striking out two. Ray grabbed their sole RBI and Payton Thompson notched two hits. Hendricks, Bret Turini and Zac Pellegrini all finished with one hit.