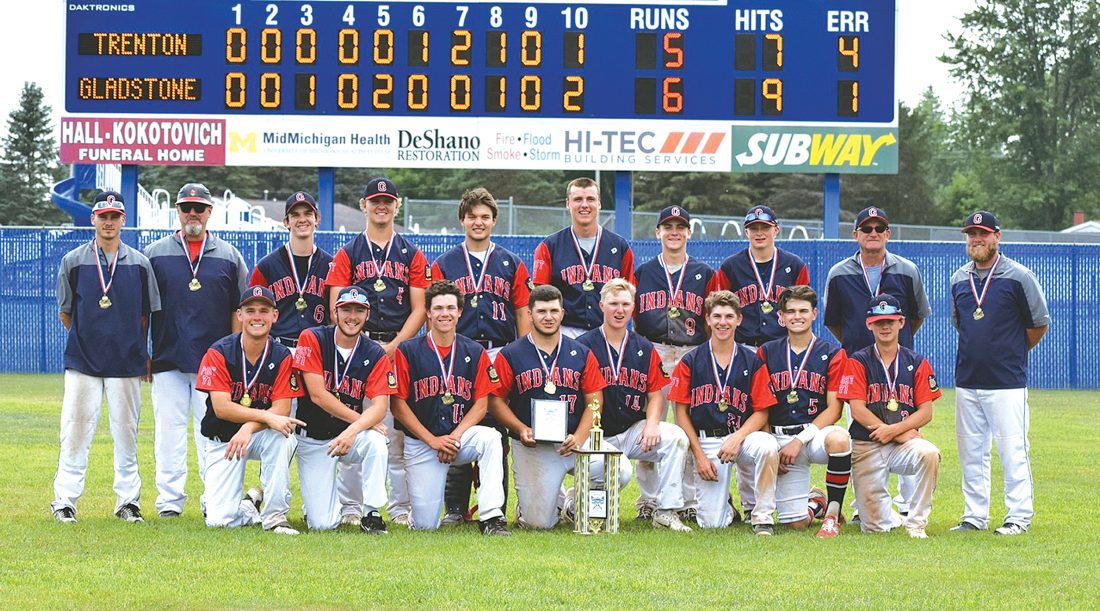 The Gladstone Indians American Legion baseball team poses after winning the Class A state championship with a 6-5 win over Trenton in 10 innings Saturday in Gladwin. The state title is Gladstone's third straight. (Jack Hall/Courtesy Photo)

GLADWIN — The Gladstone Indians are champions yet again.

Carson Shea delivered an RBI single with the bases loaded and two outs in the bottom of the 10th inning to break a 5-5 tie and give the Indians their third straight Class A American Legion baseball state championship with a 6-5 win over Trenton here Saturday.

“We’re champions, that’s all that matters,” Shea said. “It was definitely a surreal, cool moment when all my friends dog-piled on top of me. It was kind of like a storybook ending for my high school career and Legion career. All in all, I’m just plain happy.”

Shea’s hit came two batters after Ben Kelly tied on the game on a chopper to third base with the bases loaded to score Blake Krouth when the throw from third to home went over the catcher’s head. After Caden Alworden fouled off a pitch on a bunt attempt with two strikes, Shea finished the deal.

“I’ve been in that position so many times, whether it’s been in high school or Legion,” Shea said. “The worst thing than can happen is I get out and it’s a tie game. High school baseball players love moments like that, and hopefully I’ll be remembered as the guy that got the game-winning hit in the state championship.”

“I think it’s a good feeing,” he said. “It’s a little bit of a different feeling every year. It’s great for the kids who haven’t got that experience yet to finally get one.”

The Indians (20-7) held a 3-0 lead after scoring a run in the third and two in the fifth, but Trenton responded with a run in the sixth and tied the game with two runs in the seventh.

“We had our opportunities to put that game away, but it seemed like we could never get over that hump,” Shea said.

The Tribe continued to ride that momentum to take a 4-3 lead in the top of eighth, but an RBI single by Gladstone’s Dayton Bernson tied the game at 4 in the bottom half.

However, Trenton scored in the top of the 10th to take a 5-4 lead before the Indians rallied again.

“Resilient was the word I used for them to describe their performance the most,” Jurek said. “For them to just keep going and going just kind of showed the character of our guys.”

Jared Crow pitched eight strong innings for the Indians, surrendering four runs (three earned) on four hits while striking out four and walking three. Cooper Cavadeas pitched the final two innings in relief to get the win, striking out the side in the ninth.

“(Crow) was just extremely efficient,” Jurek said. “He was just getting ahead of everyone. He had a lot of innings where he only threw single digit pitches, and he was just filling up the strike zone and getting outs after outs.”

Shea is part of a strong core group of eight seniors that played their final game in an Indians’ uniform.

“This was actually my first year,” Shea said. “I didn’t go out last year and kind of regret it. Last year I wanted to focus on basketball in the summer with it being my senior year, but this year I for sure needed to go out with my friends.”

“We had a core group of seniors that really played well together and had a lot of experience,” he said. “That helped a lot with our confidence. We had to win it through the loser’s bracket the last couple years, so the guys came out with a little more fire this time and decided that’s not something they wanted to do.

“These guys realized it was getting to be the end for a lot of them, and that got a little fire under them, realizing this was it. I think that helped a lot with experience and having an older team.”