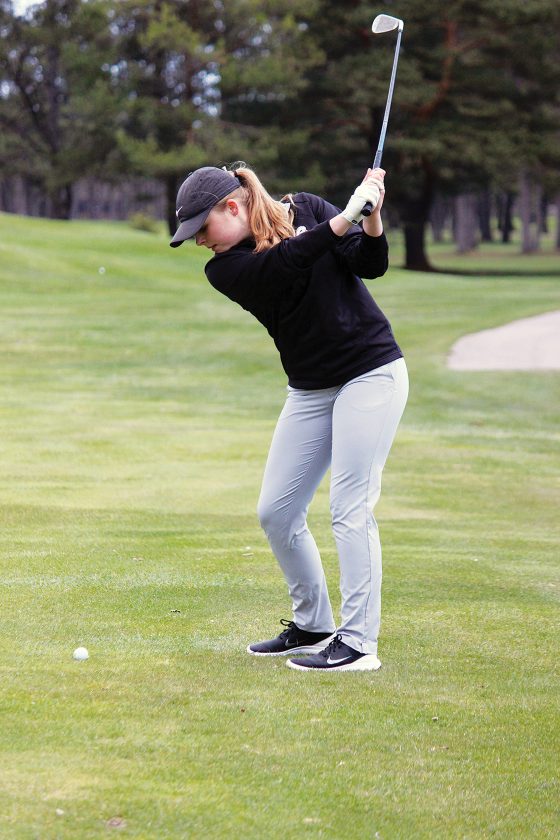 Escanaba’s Paxton Johnson chips during a meet at the Escanaba Country Club in 2017. Johnson will be among 40 women participating at this weekend’s UPLGA championship at ECC, which is hosting the event for the first time since 2005. (The Daily Press Photo, File)

ESCANABA — After 14 years, the Upper Peninsula Ladies Golf Association championship is returning to Escanaba Country Club. The tournament begins Saturday morning at 9:30 with the qualifying round and runs through Tuesday.

“As far as the Women’s U.P.’s go, it’s obviously very exciting to have the event here,” ECC golf pro Jeff Rae said. “It’s a once a year type deal, so whenever you get it, it’s very special. It’s one of those things where you look forward to hosting, your membership looks forward to it and the community looks forward to it.”

Forty women are registered for this year’s event, including defending UPLGA champion Paxton Johnson and defending UPLGA Senior champion Barb Scott — both members of ECC. Johnson has won the ECC club championship the past two years and Scott is a 14-time club champ.

“We have the 2018 UPLGA champion Paxton Johnson, who’s a member here,” Rae said. “We have the 2018 Senior UPLGA champion Barb Scott, who’s also a member here. With those two names alone, there could possibly be fireworks on Tuesday. This is like modern day boxing with Floyd (Mayweather) vs. Connor (McGregor). Granted, it’s a much different scale, but when it comes to local golf, this is as good as it gets.”

“There’s a lot of other good players,” Rae said. “I don’t know a lot of the women personally because they’re coming from all over the U.P., but there’s an extensive list of women who could win the thing.”

Another competitor to watch for is Payton Dube, an incoming senior at Hancock.

“This girl is going to bring some pressure from what I’ve been hearing,” Rae said. “Another one I’d like to mention is Lori Shea from Gladstone.”

The qualifying round will consist of foursomes, with the top 16 scores advancing to the championship flight in a match play format. The remaining 24 women will be broken into three flights of eight. The losers of the first round of the championship flight will be formed into a President’s Flight, which will be flighted based on qualifying round scores.

“That’s the best part about match play — you have no idea who’s going to win,” Rae said. “Match play is so much different than stroke play because it’s a hole-by-hole basis. If you make the top 16 and you’re in the championship flight, anybody has a chance to win in match play.

“Obviously, the better golfers and the lowers handicaps are going to have more of a chance, but with that being said, if somebody who’s a six or seven handicap comes out and has a bad day, anything can happen. When you have 40 women that are playing, anything can happen. That’s the most exciting about match play — you really don’t know what’s going to happen.”

Rae noted the course is in great condition and the forecast for the weekend looks promising and he said he hopes to show off a course that last held the event in 2005.

“From a selfish standpoint, I want to show off our course,” he said. “When you get 40 women from all over the U.P., you want your course in the best shape possible. You want really good surroundings, playing conditions and competitiveness and I think you’re going to see that here this weekend.

“From a golf director standpoint, that’s really what you want. You want to market your course … we’re over 100 years old, so there’s a lot of history involved. This is the 93rd annual UPLGA, so there’s history there as well. That’s what’s so exciting about it — you have all the history coming together at an older course.”

Rae also said the public is welcome to attend and follow the tournament. The semifinals begin 8 a.m. Tuesday.

“It’s exciting to come out. You can follow and you can watch. If you have a favorite golfer, or if you know somebody, you can go find them,” he said. “Watching match play is super exciting because it’s hole-by-hole. If you can watch the whole match, that’s pretty fun if you’re a golf fan.”