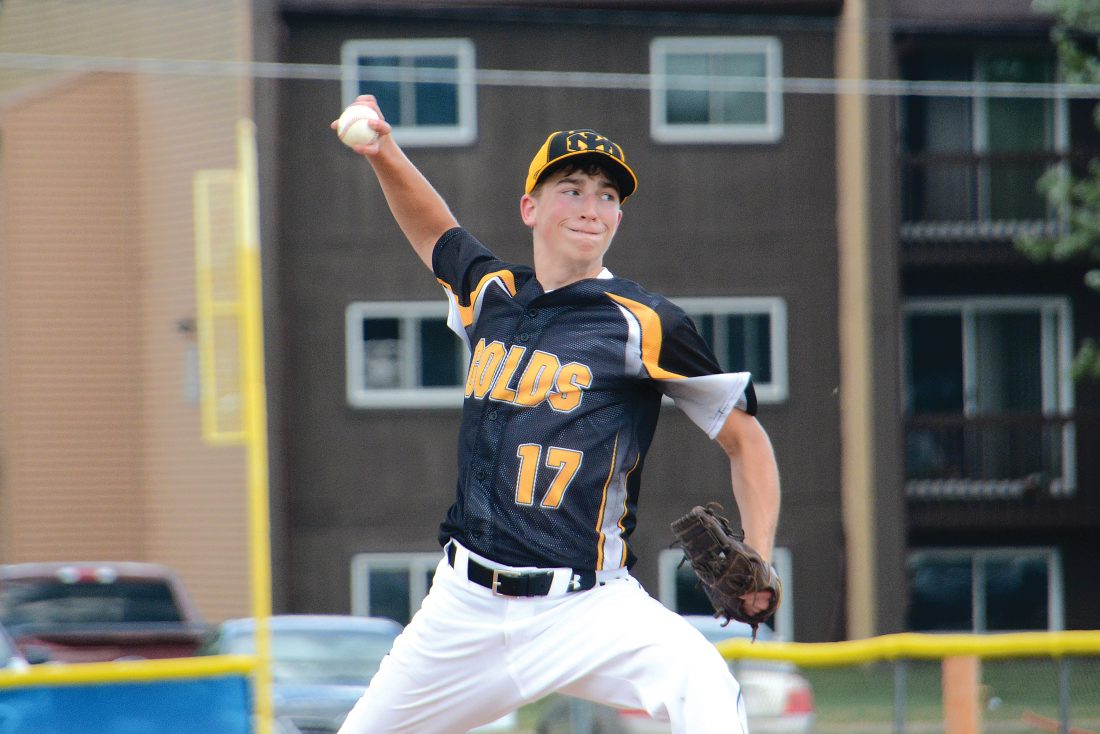 MARQUETTE — The D.J. Jacobetti Home for Veterans brought some of its residents over to Gerard Haley Memorial Field for a Wednesday afternoon of baseball and the Marquette Blues American Legion team put on a good show for its guests.

The Blues’ bats got hot early and stayed that way for the rest of the game as they dispatched the Iron Mountain Golds 16-2 in five innings.

Brendan Kaski picked up the win on the mound for Marquette as he gave up two runs on two hits with three walks and one strikeout over two innings. Hogan Nemetz and Jakob Peterson combined to pitch the rest of the game for the Blues.

“We’re kind of getting into a little bit of a groove,” Blues head coach Derek Swajanen said. “It’s tough sometimes in these types of games to stay aggressive and everything. Early on, we did a good job of doing that and getting a nice lead.

“We’re a little thin on arms again, but our pitchers did a fine job. We’re just kind of building right now. Ever since (last) weekend, we’ve kind of turned over a new leaf and hopefully, we’ll continue to build on it.”

IM opened the scoring with a run in the top of the first inning on a sacrifice fly by Chase Carlson, but the Blues weren’t rattled at all as they pushed across six runs in their half of the inning.

Peter VandenAvond opened the inning with a triple to the wall in left field, then scored on a fielder’s choice by Jakob Peterson. Marquette batted around and in his second time at the plate, VandenAvond hit an RBI single.

“Peter started it off right off the bat with that triple out there,” Swajanen said. “He’s been a good leadoff for us lately. All the guys have been hitting the ball really well. Hogan has been coming around and we’ve got to get Blake (Henriksen) going a little bit, but other than that, the boys have been playing really well.”

Down 6-1, the Golds got a run back in the second when Hunter McCarthy scored on a fielder’s choice, but Marquette kept rolling offensively as it plated five more runs in the bottom of the frame, two on a double by Peterson. VandenAvond also drove in a run with an infield single to make the score 11-2.

“We got off to a good start and got a couple of runs in, but it went downhill,” Iron Mountain coach Blake Julian said. “Our pitching wasn’t as great as we wanted, but the batting wasn’t bad. We’re going to work hard. We’re going to practice more and be ready for the next game.”

Marquette completed its offensive explosion with an additional five runs in the third, two off RBI singles from Peterson and Connor Steer. The Blues’ other three runs came on two errors and a wild pitch.

Marquette seems to be clicking right now and Swajanen thinks that might be due to the fact that his squad has competed in some difficult tournaments, mostly in Wisconsin. After facing all those tough opponents, all that work appears to be paying off.

“We play a lot of tournaments and they were rough-and-tough tournaments, but we’re getting better and it’s paying dividends,” he said.